I’m less demanding than Winston Churchill, at least when it comes to headphone amps. Churchill is often quoted as saying, “My tastes are simple: I am easily satisfied with the best” -- but with headphone amps, I don’t even need the “best.” I just want one that’s powerful enough to drive the notoriously insensitive HiFiMan HE6se headphones, and that has balanced output, because a lot of headphones I get in for review offer a balanced connection. And I want it to be affordably priced, which shouldn’t be too tough considering that even very demanding headphones need only about 1W of power. The new Schiit Magnius ($199 USD) seems like it was made according to my specifications.

Balk if you will at the name, which sounds like something you’d find in the family-planning section of a drugstore, but the company says right up front that it’s intended to be tongue-in-cheek. But that’s the only thing about the Magnius that might invite scoff. Besides all the attributes listed above, it also has unbalanced RCA and balanced XLR inputs -- with genuine Neutrik jacks, which rubs me the right way because I’ve got a set of microphone cables I built in 1993 with Neutrik XLR connectors that have still never needed repair despite near-daily use in audio reviewing and consulting and speaker measurement and jazz gigs and recording sessions. There are also XLR and RCA outputs that let you use the Magnius as a preamp with a separate amplifier or powered speakers. 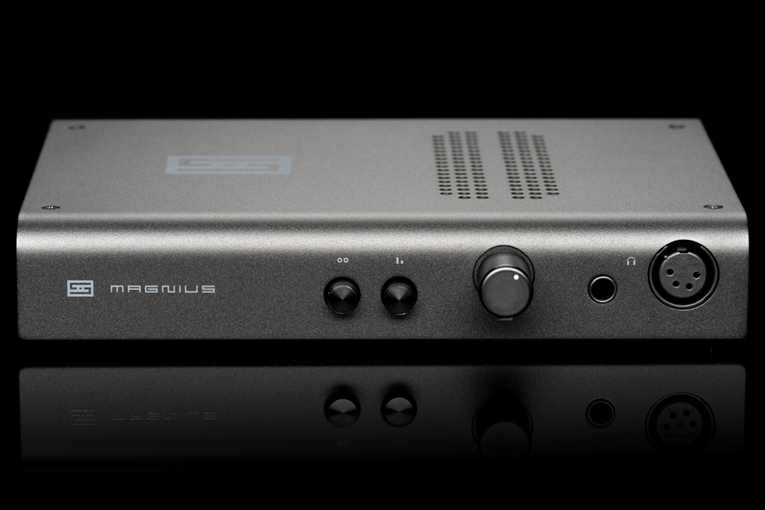 The volume control is an Alps potentiometer -- one of the nice, big, smooth-turning ones, too, rather than the dinky (but still good) ones I used in my blind-testing switcher. The front panel also has a 1/4" (6.3mm) unbalanced output and a four-pin XLR balanced output, an RCA/XLR input switch, and a gain switch.

One more thing that marks the Magnius as a class act is its wall-wart power supply. Big deal, you say? Well, this is an AC power supply rather than a DC one, which means the power is rectified, regulated (I assume), and filtered inside the Magnius, rather than trusting those tasks to Xun Winr Electronics, the company that made the supply. 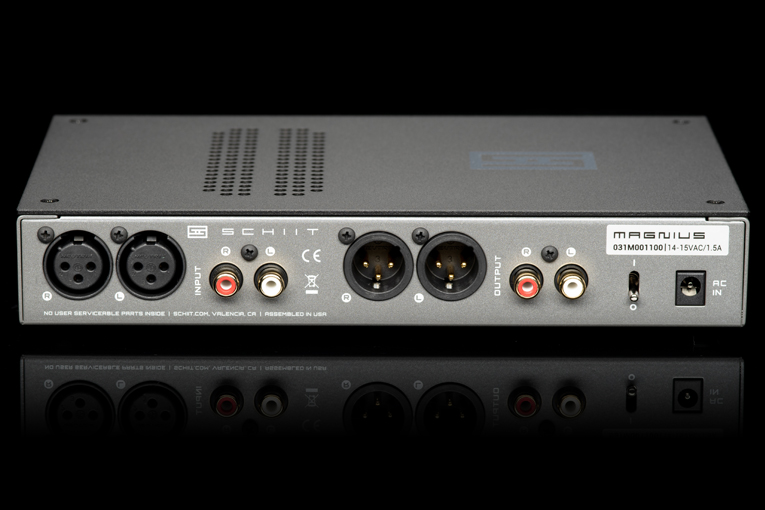 What’s missing? A fancier faceplate, tubes, and a DAC, but Schiit Audio has all that stuff in other products if you want it.

You get the amp and the power supply.

The Magnius is pretty simple to connect and operate, with two minor exceptions. First, there’s no power indicator on the front; the indicator is a red LED inside the chassis, which you can see through the top vents. Second, the input button is labeled with a dot and a circle rather than something like “XLR in / RCA out,” but considering there are only two inputs, this is not a big deal. 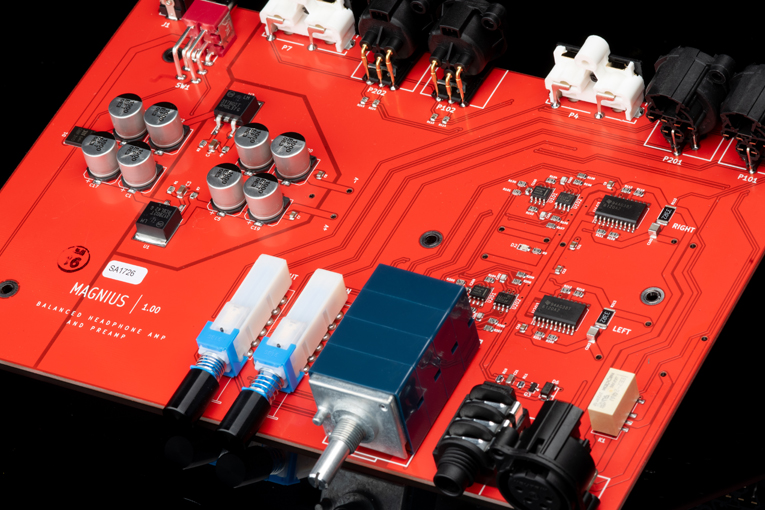 The gain switch cuts the output by 13.2dB, according to my measurements. Usually, the gain switch is there to reduce the noise floor when you’re listening to earphones, which are typically more sensitive than headphones, but even when using earphones in the high-gain mode, I couldn’t hear any noise.

I always start my headphone amp reviews by putting the amp through the toughest test I can offer: driving the HiFiMan HE6se’s. With most material, the Magnius could drive the HE6se’s louder than my ears could take. With some older, more conservatively mastered recordings, such as a 128kbps MP3 I had of R.E.M.’s “Pilgrimage,” ripped from the original CD release (Murmur, A&M Records), the Magnius got the HE6se’s playing just loud enough, with barely a dB to spare. But when I switched to the newer, remastered 24-bit/192kHz FLAC of “Pilgrimage” on Qobuz, the Magnius delivered more volume than I could use -- as it did with most of the recordings I played when testing it.

Another de rigueur amp test for me is playing ZZ Top’s “Chartreuse” (La Futura, 16-bit/44.1kHz FLAC, American Recordings / Qobuz), which, like most recordings produced by Rick Rubin, is heavily compressed and mastered to keep the music as close to 0dBFS as possible. Crank up this relentless mix and you’ll give an amp no time to catch its breath -- or more literally speaking, to cool its output transistors and recharge its power-supply capacitors. The Magnius needed no such relief, though -- it kept the HE6se’s sounding great even at a very high level. 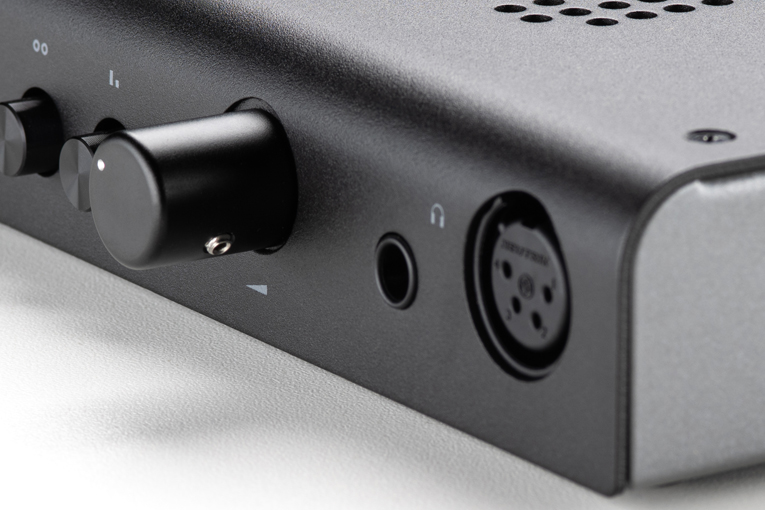 When listening to “Chartreuse,” I also noted that the Magnius seemed to make the HE6se’s sound fuller and more dynamic than they usually do. Of course, no one’s audio memory is worth much, so I filed this under “compare with another amp at matched levels.” In fact, rather than me coming up with some flowery language to describe the Magnius’s performance, then finding I have to retract those statements when I get into more rigorous testing, let’s get straight to the serious comparisons.

I compared the Magnius with the only similar amp I have: the original Musical Fidelity V-Can, which I purchased (for somewhere around $200, as I recall) because it was one of the few headphone amps then available that had a low output impedance (5 ohms). The V-Can got rave reviews for its ability to hold its own with (and occasionally beat) much more expensive models. Using my Neutrik ML1 Minilyzer audio analyzer, I matched the levels of the Magnius and the V-Can to within ±0.02dB.

Getting back to ZZ Top’s “Chartreuse,” there was no question that, compared with the V-Can, the Magnius delivered fuller, tighter, better-defined bass with more rhythmic drive. The V-Can also sounded a little coarser in the mids, which made the guitar tracks sound a bit more distorted and edgy.

Switching to the less-demanding over-ear/open-back Audeze LCD-X headphones, which are more sensitive, I noticed when I played “Rock Bottom” from jazz/pop singer/pianist Nicole Zuraitis’s All Wandering Hearts (16/44.1 FLAC, Dot Time Records / Qobuz) that the V-Can’s bass sounded bloated, which made the whole tune sound rather messy and dull; the acoustic guitar, in particular, sounded as if its strings hadn’t been changed in a couple of years. I worried that the Magnius’s apparently superior bass extension might make “Rock Bottom” sound more bloated, but it was actually the opposite -- with the Magnius, the bass tightened up quite a bit, the bloat completely disappeared, and the acoustic guitar and piano sounded much clearer.

Of course, even a completely neutral tonal balance might not always sound as good as a not-so-completely neutral tonal balance with certain material, and that’s what I noticed when I put on the JVC HA-FW01 earphones and played violinist Ray Chen’s The Golden Age (24/96kHz FLAC, Decca Music Group / Qobuz). On “Ponce: Estrellita (Arr. Heifetz),” the Magnius gave the violin more body and also produced a more ambient sound. I found the V-Can’s brighter-sounding rendition of the violin more appealing, but its more focused, less-ambient reproduction of the piano was less appealing. I’d still prefer the Magnius over the V-Can any day, but it’s worth pointing out that depending on what they’re listening to, what headphones they’re using, and what their tastes are, some listeners might disagree.

The Magnius is easily the best inexpensive headphone amp I’ve tested. It has exactly the features I demanded in the intro: loads of power plus balanced and unbalanced headphone output. And it comes in at a price that is shockingly low considering what it offers. The fact that even under tightly controlled testing conditions it clearly beats what’s considered to be a very competitive amp is just a big bonus; I’d be happy even if it offered the extra features and sounded the same. I’m impressed enough with the Magnius that I bought the review sample and will be using it for headphone/earphone measurement and as a listening reference going forward.