Sonically, true wireless earphones are in the same place that passive earphones were ten years ago: all over the map. One reason passive earphones improved is that manufacturers embraced multidriver, hybrid designs, which let them combine the powerful bass of dynamic drivers with the detailed, natural-sounding mids and treble associated with balanced armatures. We’re starting to see the same thing now in true wireless designs. The first hybrid true wireless earphones I reviewed were the Soundcore Liberty 2 Pros, which combine an 11mm dynamic driver with a single balanced armature, although to rather mixed results. Now we have the Status Audio Between Pro earphones, which use a 10mm dynamic driver with two balanced armatures. The Between Pros are available through an Indiegogo offering at an “early bird price” of $99 and a list price of $169, with a projected ship date in April. 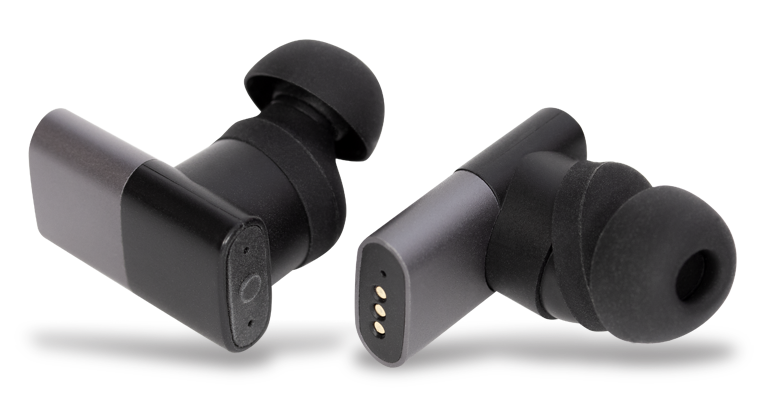 The Between Pros claim impressive battery life: 12 hours from the earphones themselves in an era where most true wireless earphones deliver six-to-eight hours of battery life before recharging. The charging case included with the Between Pros offers a claimed 36 hours of additional charge time before it must be recharged through its USB-C port.

One encouraging note I found on the Between Pros’ Indiegogo page is that the manufacturer says they’re tuned to avoid the excessive output between about 100 and 300Hz that’s common to earphones and headphones. In my experience, a big bump in the response in this area makes earphones and headphones sound bloated, indistinct, and excessively punchy, and the Harman curve research backs up my findings.

The Between Pros are IPX5-rated, which makes them splashproof and water-resistant enough to withstand a blast from a faucet. (This is a recent development—as of this writing, the Indiegogo page still lists them as IPX4-rated.) For Bluetooth transmission, they include the AAC and aptX codecs in addition to the standard SBC codec.

The package includes the earphones and charging case, a USB-C charging cable, silicone tips in three sizes, and three sizes of silicone “wings” to better fit the Between Pros in your earlobes. 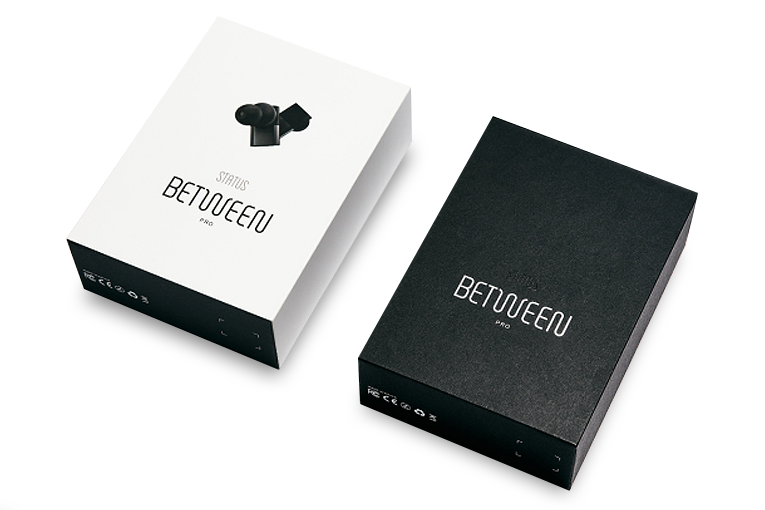 The Between Pros show there’s a lot more to earphone fit than just the number of tips included. The cylindrical enclosure holding the drivers is about 7/16″ (11mm) in diameter, so it’s small enough to enter the pinna without resistance, and the ergonomically angled soundtube helped me get a tight seal with the largest eartips, without having to fuss around with the earphone positioning as I usually have to.

Instead of large buttons on the sides, the Between Pros have tiny buttons on top. It’s more convenient than it might sound. By putting your thumb below the earphone and your index finger on top, it’s easy to push the buttons without mashing the earphones further into your ear canals, as some other true wireless models force you to do. The buttons let you control play/pause, track skip, and volume. 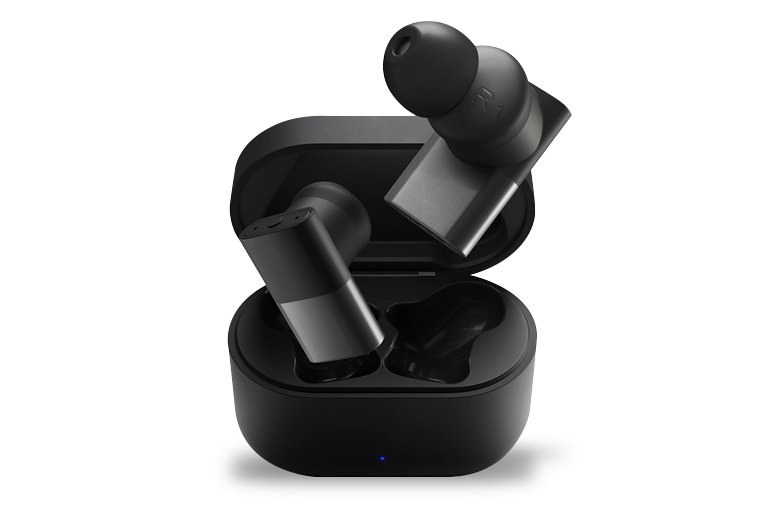 The broadband audio content and beautiful voice recordings in Joni Mitchell’s Court and Spark (24-bit/192kHz FLAC, Rhino-Elektra/Qobuz) make it a pretty good stand-in for Tracy Chapman’s “Fast Car,” which I feel I’ve been overusing a bit. On Mitchell’s “Free Man in Paris,” the Between Pros sounded essentially flat and neutral, with a mostly natural portrayal of Mitchell’s voice (with perhaps a trace of a peak/dip combination in the upper harmonics, around 3kHz, that made the vocals sound subtly coarser). I loved the detail I heard in the four guitar tracks (two acoustic, two electric), although I thought the kick drum sounded a little overemphasized, as did the bass guitar—and in fact, although the bass sounded pretty clear, it did seem a little bloated, like there was an excess of energy at 200Hz. But maybe that’s in the recording, because in the next tune, “People’s Parties,” the bass sounded leaner and clearer, and all elements of the mix were pretty much perfectly balanced.

This made me want to rush right to the test bench to see how the Between Pros’ bass response measures, but I held off. Hit the link for the Measurements section at the top of the article if you’re curious. 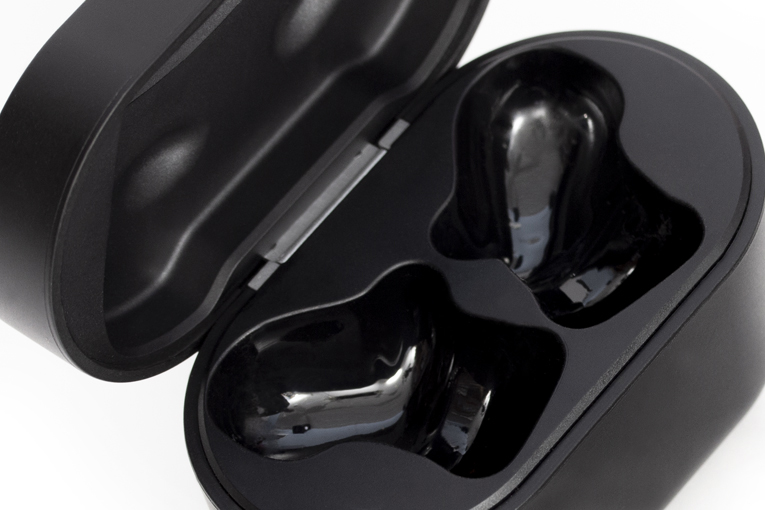 The bass also sounded a little full on Nipsey Hussle and Jay-Z’s collab “What It Feels Like” (Judas and the Black Messiah: The Inspired Album, 320kbps Ogg Vorbis, RCA/Spotify), but the voices sounded wonderfully clear and uncolored, the guitar sounds and electronic effects gave me a huge sense of space, and the groove was solid. This is a pretty impressive showing for a set of true wireless earphones selling for $99 (or whatever). “What It Feels Like” didn’t sound as dynamic as it would on a big set of headphones or a decent set of speakers, but otherwise it didn’t lose much, if anything, in tonal fidelity or spaciousness. The sound reminded me of what I heard from the 1More Quad Driver hybrid passive earphones, which rank among my favorite affordable multidriver earphones.

When I switched to a completely different genre—the roots-R&B-rock of singer-songwriter Nathaniel Rateliff—I got much the same result from the Between Pros. On “What a Drag” (And It’s Still Alright, 24/88.2 FLAC, Stax/Qobuz), the vocals were clear and mostly uncolored, with maybe just a little extra zip in the upper harmonics, as I heard with Joni Mitchell’s voice; this made Rateliff’s tenor sound a little clearer without making it sound unnatural. The sense of space I got from the heavily reverbed handclaps and slide guitar was impressive for true wireless earphones—the sound was almost as spacious as I heard when I switched to the JVC HA-FW01 passive earphones, and that’s quite an accomplishment, considering the HA-FW01s list for $329.95, and that they didn’t have to get their signals through a lossy Bluetooth codec. 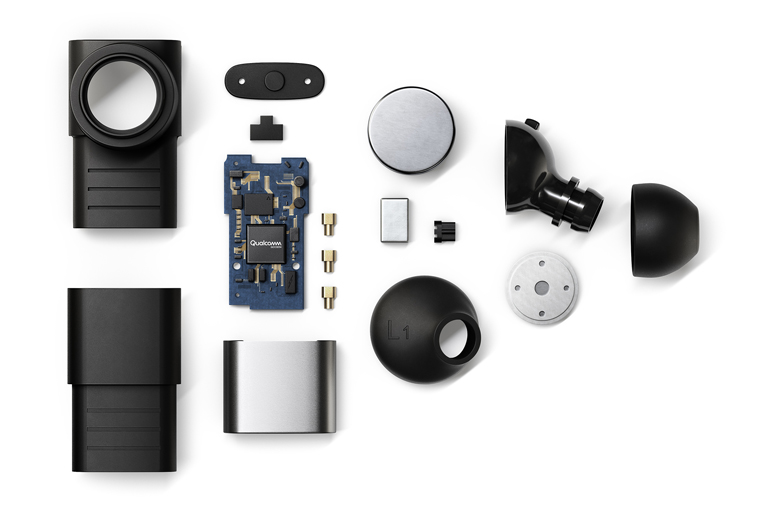 Curious to see how these very inexpensive, tiny earphones could reproduce large-scale symphonic works, I played my favorite recording of Berlioz’s Harold in Italy, Op. 16, by the San Diego Symphony conducted by Yoav Talmi, with violist Rivka Golani and violinist Igor Gruppman (16/44.1 FLAC, Naxos/Qobuz). On the gratifyingly kick-ass fourth movement, “Allegro Frenetico (Orgy of Brigands. Memories of Scenes Past),” the Between Pros conjured a realistic presentation from a spatial standpoint; it sounded much like I was hearing the sound of a real orchestra in a hall, with sound reverberating off the side walls and ceiling. The Between Pros’ generous bass didn’t cloud this music one bit, and they gave me more of the feeling that I was hearing a big orchestra whose double bass and percussion sections played with particular verve and vigor. I’d say there was a little extra zip somewhere in the 3 to 5kHz range, making the strings sound a tad bright on the loudest sections (and this is among the least bright-sounding recordings of Harold in Italy), but we’re talking just a couple of dB here—nothing I couldn’t have dialed out with the phone’s EQ, had I thought it worth the effort.

When I played “Shame Shame,” from the Foo Fighters’ new album Medicine at Midnight (24/44.1 FLAC, RCA/Qobuz), I certainly wouldn’t have called the Between Pros’ bass tight, but it was definitely less boomy than the EarFun Frees’ bass. The Philips TAT8505s’ bass was tighter than with the Between Pros’ or the Frees’, but at the expense of a brighter, somewhat grating sound. But on the next tune, “Cloudspotter,” the Between Pros’ bass sounded tighter than the Frees’, with more even-sounding bass guitar notes and less-emphasized kick drum than the EarFun Frees delivered. Again, I say: check the Measurements link at the top of the article! 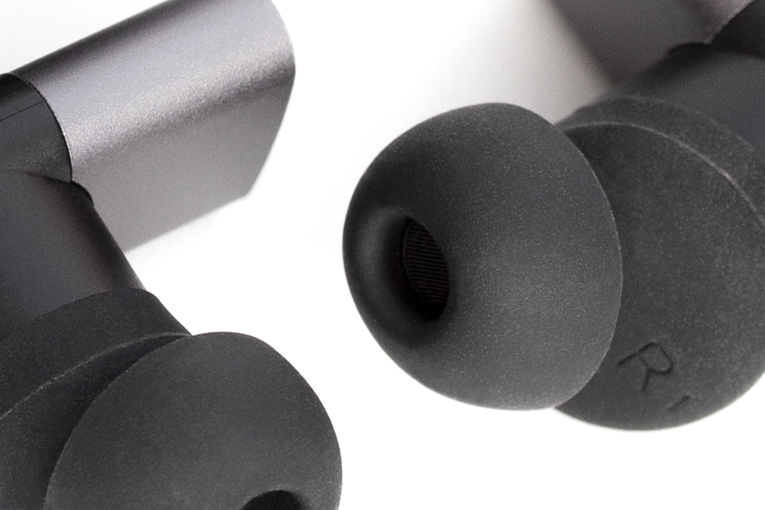 Beyond the bass, though, I thought the Between Pros’ clarity in the mids and treble was a step up from the Free or the TAT8505 earphones. The strings and cymbal clashes in Harold in Italy sounded more vivid, spacious, and exciting—with a little more detail than the Frees could muster and without the brightness that hinders the TAT8505s.

The Between Pros easily rank among the most recommendable true wireless earphones I’ve found. They sound very good for the price, and the ergonomic design gives me confidence that most, if not all, listeners will get an excellent fit—and, therefore, the best possible sound that the Between Pros can deliver. So often, I have to condition my recommendations on true wireless earphones because I’m not confident that every listener, or even a majority of listeners, will get a good fit.

I suspect anything in the same category that I’d like better sonically—perhaps the Technics EAH-AZ70Ws—would be a lot more expensive, and few other true wireless earphones offer the kind of easy fit and friendly design that have kept me reaching for the Between Pros every time I head out for a dog walk or settle down for a long phone call with a friend.

E-mail: This email address is being protected from spambots. You need JavaScript enabled to view it.
Website: status.co