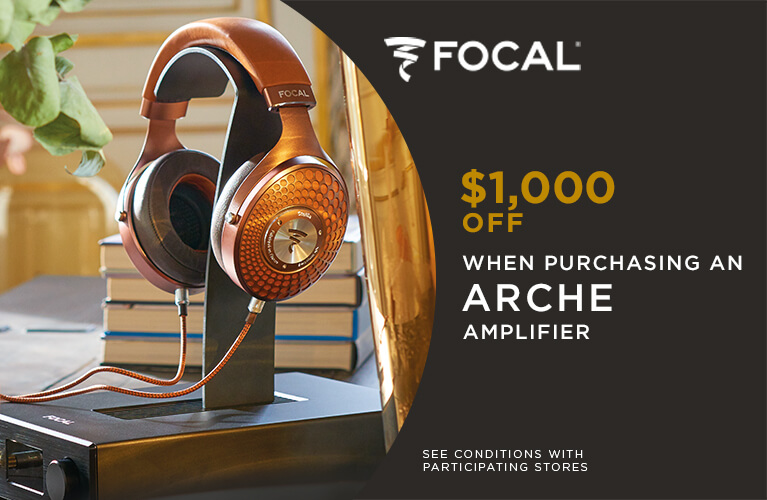 As I’ve written before, headphone amps are typically more critical to headphone sound quality than speaker amps are to speaker sound quality. That’s largely because there’s so little standardization of headphone impedance and amplifier output impedance. The amp might be even more critical to the sound if you’re using expensive headphones of the type Focal is known for, such as the Utopia ($3999 USD) and Stellia ($3000) designs. So it’s no surprise that Focal launched the Arche ($2500), a high-end DAC-headphone amp with features intended to get the best sound out of the company’s headphones.

Although the Arche can drive any headphones, its front-panel menu offers specific EQ curves for five Focal headphone models: the Clear, Elear, Elegia, Stellia, and Utopia. This is an ideal way to build a headphone amp, because even the most expensive passive headphones have response flaws. Why? Because they’re tuned solely through physical adjustments to the driver and enclosure -- a method far less precise than, say, putting a resistor-capacitor-inductor network in a speaker to tame a response peak, or making an adjustment in a digital signal processor. 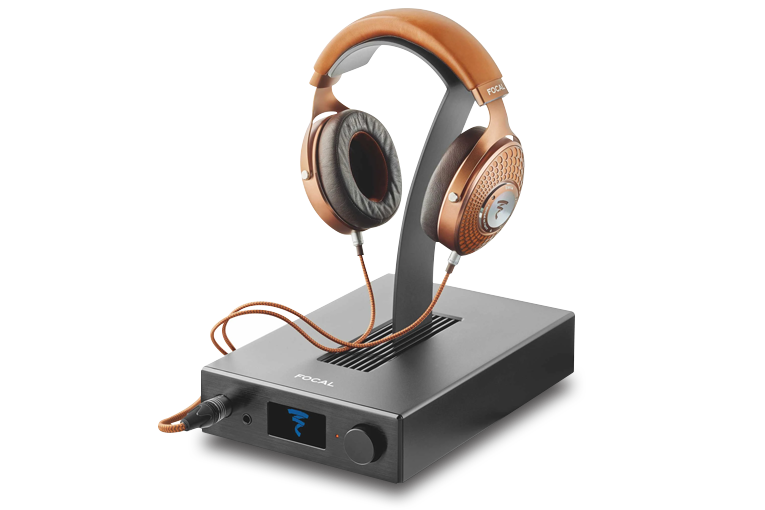 The Arche’s most obvious calling card is its integral headphone stand, but the amp itself is also interesting. It’s a class-A, dual-mono circuit designed in conjunction with Micromega, and it offers Voltage and Hybrid modes. The former is what’s found in most modern solid-state headphone amps, while the latter is intended to make the Arche more of a current-drive amp. Although no other details are provided, I suspected (and confirmed through my measurements) that the current-drive mode adds additional output impedance -- an idea that’s long been used in speaker amps, most notably in many Sunfire models. If you’re using dynamic-driver headphones with a non-flat impedance, the added impedance in the amp’s Hybrid mode will react with the headphones to change their sound slightly.

Unbalanced RCA analog inputs are also provided, along with unbalanced RCA and balanced XLR outputs that let you use the Arche as a DAC with a conventional stereo system. There are two headphone outputs: balanced output on a four-pin XLR jack, and unbalanced on a 1/4" (6.3mm) jack. 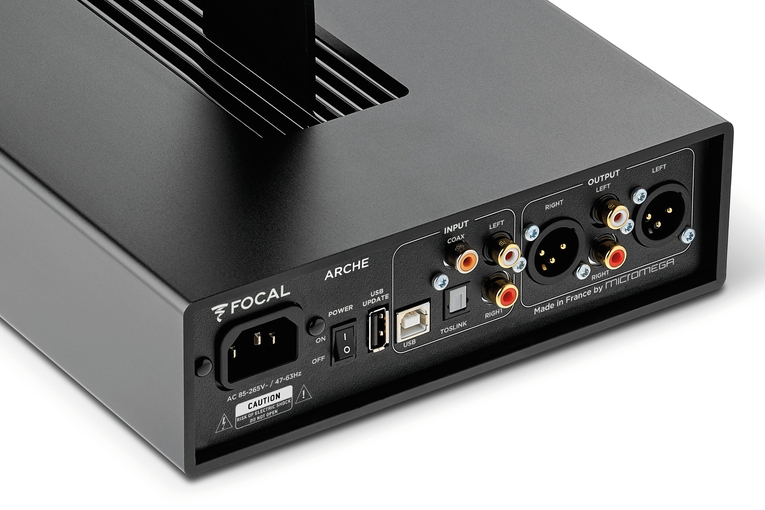 The Arche includes the amp, the stand, four dime-sized silicone pucks for its mildly spiked feet to sit on (so as not to scratch the surface underneath, I assume), and a power cord.

Setting up the amp requires only connecting the source(s) and attaching the headphone stand (which you can leave off if you prefer). 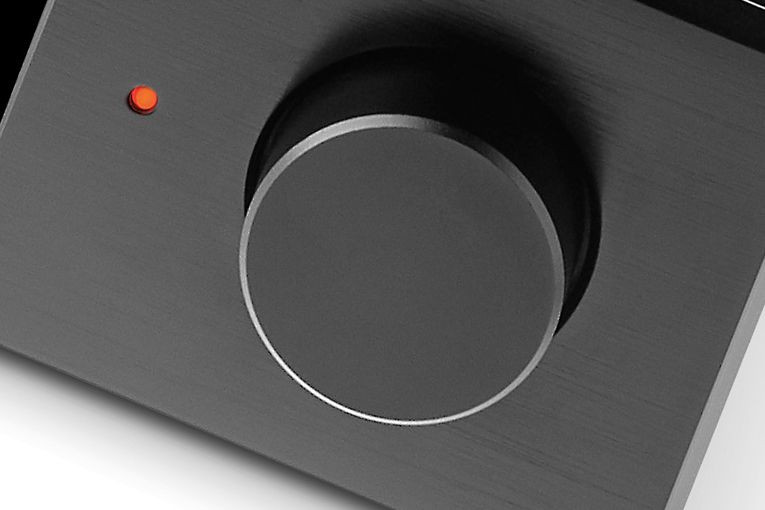 A single knob/push-button adjusts volume and controls the menu system. I didn’t need to use the manual to figure out the menus, which let you select Low or High gain, flip the phase, choose between Voltage and Hybrid modes, and select one of the five Focal headphone-specific EQ settings.

There’s so much to listen to here: evaluations of the amp and the DAC, and of the various EQ modes.

I started by comparing the Arche to my Audio-gd NFB-1AMP, a very well-made, high-powered amp I’ve found capable of driving any headphones. In this case, I used an iFi Audio xDSD DAC-headphone amp as a DAC to feed the Arche and the NFB-1AMP, using my Neutrik Minilyzer ML1 audio analyzer to match the levels to within ±0.09dB. No matter what music I played, the comparison was close. Although with more delicate, detailed material, such as “You Are So Beautiful,” from Casey Abrams’s Jazz (16-bit/44.1kHz AIFF, Chesky), the Arche seemed to have just a bit more air and detail in the treble. 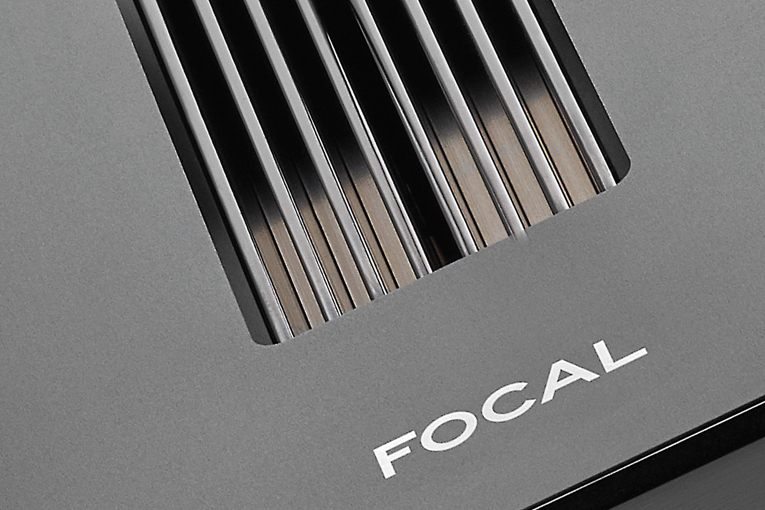 I then tried using the Arche with the most difficult-to-drive headphones I have: the HiFiMan HE6se’s. In its High gain mode, the Arche drove the HE6se headphones fairly well. Although I initially put on a Patricia Barber side for this test, I quickly came to my senses and put on something more crankable: the live version of “Cold Gin,” from Kiss’s Alive (16/44.1 FLAC, Casablanca/Qobuz). Even through the HE6se’s, there was volume to spare, and hearing all the detail in the unison guitar parts at the end of the instrumental section was downright thrilling. Pretty good for a band that’s not exactly revered for its virtuosity.

The DAC built into the Arche seems quite good as well. I evaluated it by using the xDSD with the Arche’s analog input, and a direct connection with the Arche’s USB input, matched to within ±0.06dB. I thought the Arche’s internal DAC was just a hair better -- for example, giving me a tad more definition and detail in Casey Abrams’s voice on “You Are So Beautiful,” and having no discernible tonal balance or tilt of its own.

To test the EQ modes, I first plugged in the Utopias and switched back and forth between the Voltage and Utopia modes. Listening to Casey Abrams’s Jazz, I couldn’t tell the difference, other than a very slightly reduced volume when I used the Utopia mode. I wondered if bassier material would make the difference more clear, so I switched to Trapeze’s “Black Cloud” (Medusa, 16/44.1 FLAC, Threshold/Qobuz), a classic early-1970s power trio recording. Here, I could hear that the Utopia mode introduced a very subtle downward tilt in the tonal balance, with just a tad more bass and a tad less treble. I liked this better. “Black Cloud” sounded great through the Utopias with the amp in Voltage mode, but engaging the Utopia EQ more gave it even more kick. 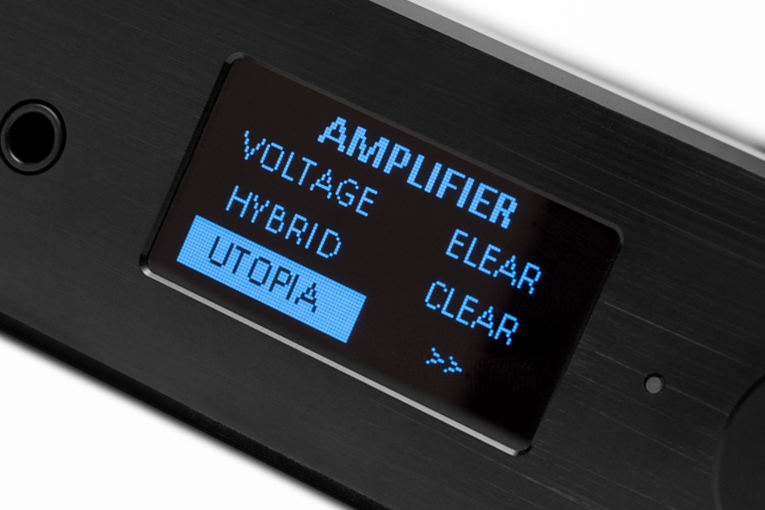 Focal also sent me a set of Stellia headphones to try with the Arche. In this case, the difference was more noticeable -- again, a tilt toward the bass and away from the treble, but more of a tilt, and a bigger reduction in volume -- and I can’t say it really improved the sound of the Stellias. It made them sound more mellow, but to me, you buy headphones like the Stellias because you want to hear that treble and you want to hear that detail.

I also tried the Hybrid mode versus the Voltage mode, but with the Utopia and the Beyerdynamic Amiron Home (impedance rated at 250 ohms but measured more like 300) headphones, I had a hard time hearing any difference, even on demanding material such as the new album Periphery by singer Priya Darshini (24/96 AIFF, Chesky).

As I don’t panel-test headphone amps, I’m comparing the Arche with similar ones in its approximate price range.

I haven’t tested a colossal number of high-end headphone amps, but one I have tested and liked -- although I dinged it for being pricey -- is the Lehmannaudio Linear USB II ($2199). It’s a wonderfully simple, very good-sounding product, but the Arche offers much more for its only-$300-higher price: more digital inputs, balanced output, DSD, and, of course, the integral stand. My power output and frequency response measurements for the two are similar. 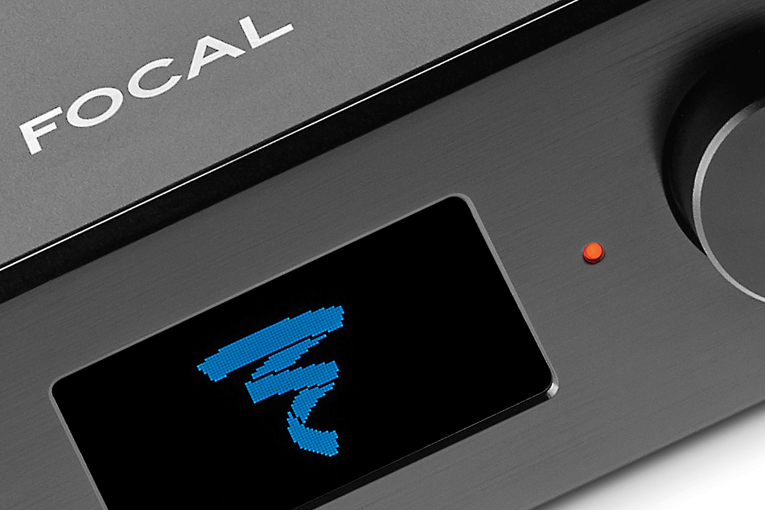 A closer competitor might be Sennheiser’s HDV 820 ($2399.95). I haven’t tried it, but it seems quite similar to the Arche, with most of the same features -- plus a 4.4mm balanced output, and minus the Arche’s integral stand.

I think listeners who have invested four bills in high-end Focal headphones should probably buy the matching Arche amp. It’s very well-engineered, and includes a thoughtful feature set and a friendly design. I do admit that I’d hoped Focal would do more intensive EQ within the Arche to optimize the sound of its headphones -- the tweaks it made are well within the capabilities of even rudimentary equalizers -- but the company’s headphones are among the most revered in the industry, so I guess if it ain’t broke, don’t fix it.

The Arche is a good buy if you already have Focal headphones, but if you’re buying Utopias or Stellias, you’d be crazy not to add an Arche.

Brent Butterworth 5 days ago Audeze iSine10 Earphones
@MauroHi, Mauro. I don't think the in-ears in this case add anything in particular relative ...

gzost 6 days ago HEDD Audio HEDDphone Headphones
They are by an obscure brand, but full-range AMT has been done before - https://precide.ch/eng/eergo/ergo2.htm
Not ...

Mauro 7 days ago Focal Elegia Headphones
My take for those that might be interested buying Elegia’s:
They have an incredibly clear midrange ...

Mauro 12 days ago Audeze iSine10 Earphones
Hi Brent,
do these in-ears add something more to the sound compared to over-ear's?
Have you ever ...