The Monolith Liquid Platinum and Monolith THX 24459 are both headphone amps, and they both come from Monoprice, but otherwise, they couldn’t be more different. The tech behind the Liquid Platinum comes from artisanal amp designer Alex Cavalli, while the tech behind the Monolith 24459 comes from THX, a company known for its dedication to technical standards and measurements. The Liquid Platinum ($769.99 USD) is a plain ol’ amplifier, with nothing but a couple of tubes to distinguish it, while the Monolith THX 24459 ($479.99) is packed with technology, including a built-in DAC with digital inputs; a menu-driven control system with a front-panel display; and a digital signal processor (DSP) that allows parametric equalization, multiple filter modes, and Dirac Sensaround II headphone processing.

The Monolith 24459 is one of only a few headphone amps (the others being the Benchmark Media Systems HPA4 and the Massdrop x THX AAA 789) to use THX’s Achromatic Audio Amplifier (AAA) technology. Most amps reduce distortion by feeding part of their output in reversed phase back to their input, which cancels out most of the distortion. But AAA uses feed-forward circuitry, which, in essence, corrects for distortion as it happens. The results, in products such as Benchmark’s AHB2 power amplifier, have been some of the best measurements ever seen from amplifiers, with extraordinarily low noise and distortion.

Although the Monolith 24459 has balanced and unbalanced inputs and outputs, all incoming analog signals are digitized so they can be run through the DSP. Theoretically, this could result in a slight loss of fidelity when the analog signal is digitized, but this can be avoided by using one of the Monolith 24459’s digital inputs, which include USB, TosLink optical, coaxial RCA, and AES3 XLR.

DSP options include high- and low-frequency shelving, which cuts or boosts treble and/or bass by as much as ±6dB. The frequency for bass shelving is adjustable from 60-200Hz, while the treble-shelving frequency is adjustable from 5-12kHz. There are also five bands of parametric EQ, each of which can boost or cut a specific audioband by as much as ±6dB, with the Q (bandwidth) of the filtering adjustable from 0.5 (wide) to 5 (narrow). The center frequency of the band is user-selectable from 20Hz to 20kHz, in 1Hz steps to 100Hz, 10Hz steps from 100Hz to 1kHz, and 100Hz steps from 1kHz to 20kHz. This is a powerful EQ system that will let you tune out most of the headphones’ sonic anomalies, although as SoundStage! Solo writer S. Andrea Sundaram found, it’ll be easier to do that if you have measurements of your headphones.

While I’m a big fan of EQ in headphone amps, I’m not so sure about the utility of the Monolith 24459’s dynamic range compression (DRC) feature. This reduces peak levels and increases minimum levels, which with some music can produce a more enjoyable listening experience. Note, though, that almost all commercial recordings already employ DRC. While I’d love to have a DRC feature in my car stereo (it would make classical music, which doesn’t use much DRC, easier to hear in the car’s noisy interior), I wonder how useful it is in the relatively quiet home environments where the Monolith 24459 will be used.

And if that weren’t enough, the Monolith 24459 also has selectable filters (Normal, Slow1, and Slow2) for the digital-to-analog converter, and even has them for the analog-to-digital converter (Normal and Slow). Check our measurements to get the clearest idea of what these do.

This review covers the firmware that’s supplied as of early June 2019. Monoprice says they’ll be adding new features in future firmware updates for new and existing units, such as more parametric EQ bands and memories for different headphone EQ settings. Both of these features will be welcome; Monoprice predicts they’ll be available sometime this August.

The Monolith 24459 comes with just one accessory: a wall-wart power supply.

Operating the Monolith 24459 is mostly a matter of navigating its menu system, which is controlled by two buttons and a knob, and monitored through a small front display. The only major complication is that there’s no dedicated power button -- you have to remember to push the Menu/Back button to power up the unit. It’s not a particularly intuitive menu system, but you’ll figure it out. 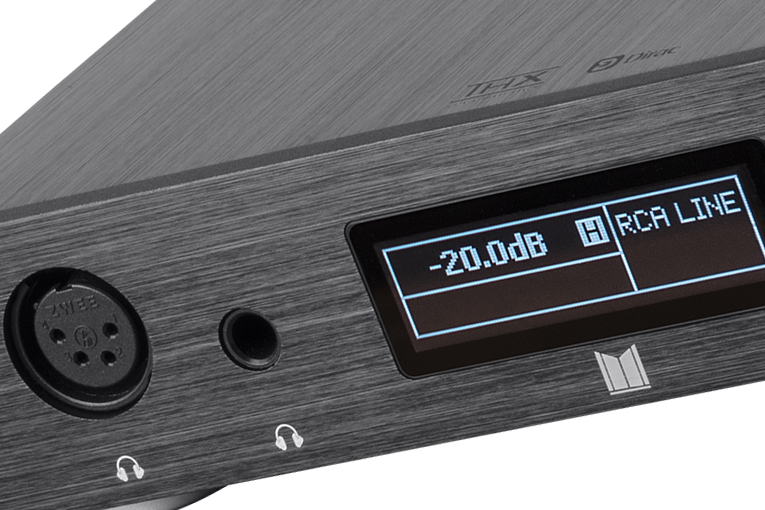 However, expect to do a lot of button pushing if you use the EQ features, as the menu times out after about 30 seconds, and getting into, say, parametric EQ3 takes three button pushes and a spin of the volume knob (which doubles for menu navigation). You also have to push a lot of buttons to look over your various EQ settings.

You can read my impressions of the Monolith 24459’s basic sound quality in my review of the Liquid Platinum. Basically, it’s a solid, well-engineered amp, easily capable of driving the demanding HiFiMan HE6se headphones. For this review, I’ll focus on exploring the Monolith 24459’s advanced features.

What I most wanted to test is the Monolith 24459’s EQ function. I knew just from looking at the menus that the amp’s internal DSP has enough power to correct practically any frequency response problem in headphones, but I decided to assign myself a task that would show exactly how powerful the EQ is (or is not). The goal: to make the Audeze LCD-X headphones sound just like the HiFiMan HE1000 V2 headphones. Not that I prefer the HE1000 V2s -- I like both of these headphones for different things -- but I thought it would be more difficult for the muscular Audezes to mimic the lighter, airier sound of the HiFiMans. And I wanted to do this not with the ~$7500 G.R.A.S. ear/cheek simulator I use, but with gear that a typical enthusiast can afford: the $199 miniDSP EARS headphone measurement fixture.

I started by measuring the HE1000 V2s with the EARS and Room EQ Wizard, then measuring the LCD-Xes. I used the shelf EQ to dial down the LCD-Xes' bass below 100Hz and treble above 12kHz. This got me a little closer, but I needed to bring in the parametric EQs to make more precise adjustments.

After about a half hour of trial and error, I was able to get the LCD-Xes sounding pretty close to the HE1000 V2s, but the limitations of the Monolith 24459’s parametric EQ capabilities became evident -- mainly the limit of ±6dB boost and cut. The differences between two headphones in a particular audioband can be much greater than that. I was able to get past this limitation to some extent by “stacking” the filters -- i.e., using two parametric EQ bands at about the same center frequency to create a larger boost or cut. I assume the ±6dB limitation is in there to protect the amp and/or the headphones from being overdriven, but hardcore headphone tweakers would probably want a wider adjustment range. And besides the limitations on the gain control, I could have used a couple more bands of parametric EQ (although those are promised in a future firmware update). Still, this is plenty enough power to get almost any headphones sounding a lot closer to the way you want them to sound. 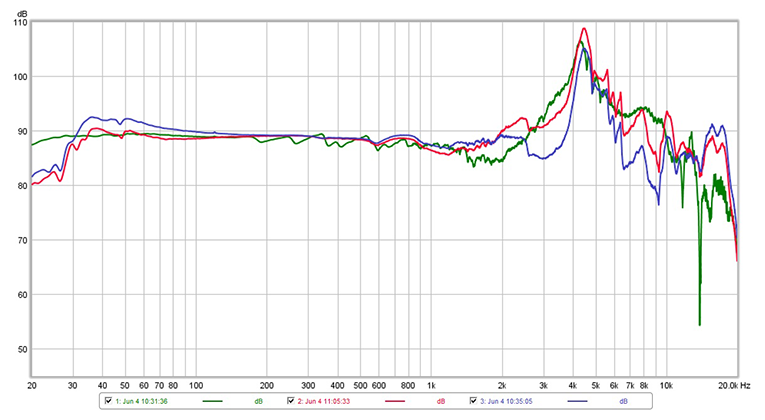 Frequency response of the HiFiMan HE1000 V2 headphones (green), and the Audeze LCD-X headphones before (blue) and after (red) EQ.

You can see the end result in the graph here. With more experimentation, I might have been able to get the LCD-Xes’ curve a little closer to the HE1000 V2s’, but this was enough to make the two headphones’ tonalities sound similar, although the LCD-Xes’ treble did end up sounding a little crispier and less smooth than the HE1000 V2s’. Is that because all the treble boost I added created other problems (including a stronger peak at 4.5kHz that I couldn’t dial out without an additional EQ band)? Might I have been able to fine-tune the treble more to smooth it out? Do I even want to alter the sound of the LCD-Xes, which I like despite their anomalies? It doesn’t matter, because the point here is that the Monolith 24459 allowed me to raise these questions, while most other headphone amps wouldn’t have allowed me to make any sort of adjustments at all.

Whether you like the Dirac Sensaround II is purely a matter of taste. To my ears, it seems to create the impression of having a speaker in front of you and one directly to either side of you, whereas the unprocessed sound of a good set of headphones delivers more of a sound like hearing a couple of stereo speakers. Sensaround II also introduces some mild anomalies in the treble, making it sound slightly accentuated and a little harder and more assertive. After going back and forth with it, I developed an affinity for both effects. It depends on the recording, the headphones you’re using, and your personal taste, but three things I can say for sure: Sensaround II doesn’t suck, it’s there if you want it, and it can be bypassed if you don’t.

I’ve already compared the sound of the Monolith 24459 to other amps in my Liquid Platinum review. However, I don’t think anyone considering the Monolith 24459 is going to compare it with conventional headphone amps. Instead, they’ll compare it with technologically advanced amps that include EQ -- although there are only a few of those. One is the miniDSP HA-DSP ($325), but that’s a portable amp. I haven’t tried it, but it’s hard to imagine the HA-DSP could muster the Monolith 24459’s impressive output power, and its input and output connections are much more limited. One big advantage of the HA-DSP over the Monolith 24459, though, is that its EQ/tuning functions are app-based, so they should be much easier to adjust. 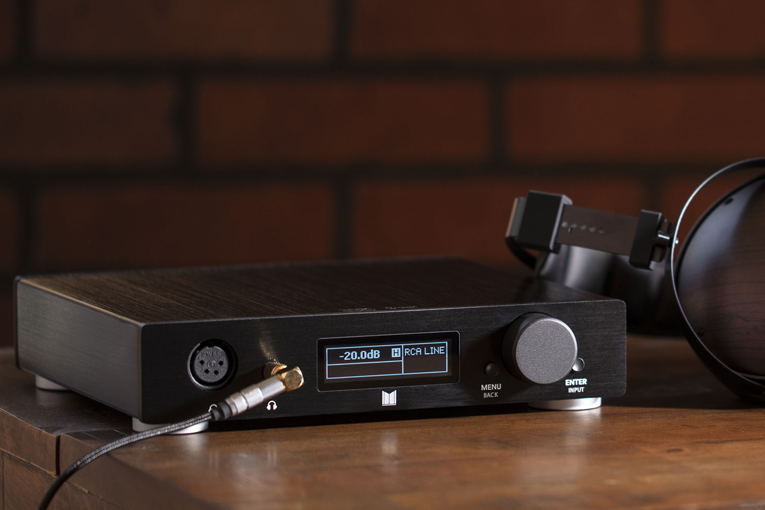 I must also point out that you could use an EQ app in your laptop, phone, or tablet along with a conventional headphone amp. This works, but with two downsides. First, those apps, while easier to use than the Monolith 24459’s EQ system, probably can’t match the precision and power of the Monolith 24459’s EQ. (Sonarworks True-Fi is an obvious exception.) Second, as we all know, computers and phones often seem to change their settings of their own free will (or perhaps because the user unwittingly touched the wrong button or activated some hot-key combination), so the EQ settings you worked so hard to nail down may be deactivated without you even knowing. This is why I don’t often use EQ apps unless they’re dedicated apps for specific headphones.

I’m not the kind of guy who gets super excited about headphone amps, because the differences among them are usually so subtle, and picking one is so much a matter of personal taste. But I can get excited about the Monolith 24459. While the Monolith 24459 seems impeccably engineered, it’s so much more than that. It’s a tool of exploration for the devoted headphone enthusiast, one that will absolutely, positively make a difference in the sound you hear.