I’m glad that the 64 Audio Nio earphones ($1699 USD) incorporating a whopping nine drivers per ear isn’t the most interesting thing about them. Because if it were, then I’d have to get all whooped up about nine drivers when I know that earphones with just one driver can achieve extraordinary sound. But I think the other technologies packed into the Nios are more worthy of attention. 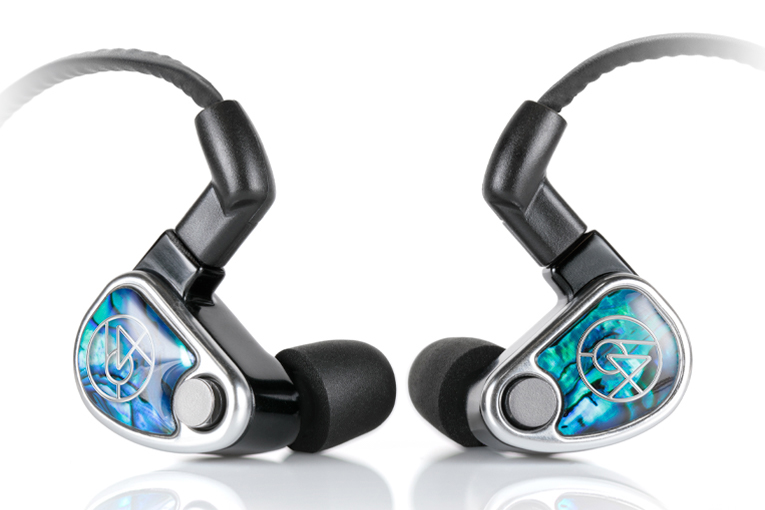 Next is APEX (Air-Pressure Exchange), a set of interchangeable vents that plug into the sides of the earphones and release internal pressure to increase comfort and let you hear outside sounds. The M15 module is factory-installed; it’s said to be “-15dB,” which I assume means it reduces outside sounds by 15dB. Of course, as any earphone isolation measurement shows, attenuation of sound by ear occlusion is not consistent across the entire frequency spectrum. So as with all earphones and headphones, trust the isolation measurements, not the specs. Also included are M20 (-20dB) and MX modules (no specification). Before I tried the Nios, I wasn’t sure the problem APEX intends to solve even is a problem, but we’ll find out.

Last, but just as interesting, is LID (Linear Impedance Design). Normally, earphones with balanced armatures present large swings in impedance as the frequency of sound changes, which means they typically sound a lot different with high-impedance sources than they do with low-impedance sources. LID flattens the earphones’ impedance curve. The most common method of flattening an impedance curve is to “hammer down” the peaks, which is why the Nios’ rated impedance is a super-low 6 ohms. Longtime audiophiles may remember that speaker designer Jim Thiel also sought to flatten his speakers’ impedance curves, which is why some of them dropped to 2 ohms, and why they were notorious for blowing amp fuses and tripping circuit breakers—but this shouldn’t be a problem with earphones, which typically require about four orders of magnitude less power than speakers.

Of course, no matter how much tech is packed into earphones or headphones, it doesn’t count for much if they’re not tuned right. So let’s find out if they are.

The package includes silicone and foam eartips in three sizes each, two pairs of APEX modules, a hockey-puck-shaped leather carrying case, and a 48″ (1.2m) cable tipped in a stereo 3.5mm (1/8″) unbalanced stereo plug on the source end and dual-pin connectors on the ends that plug into the headphones. 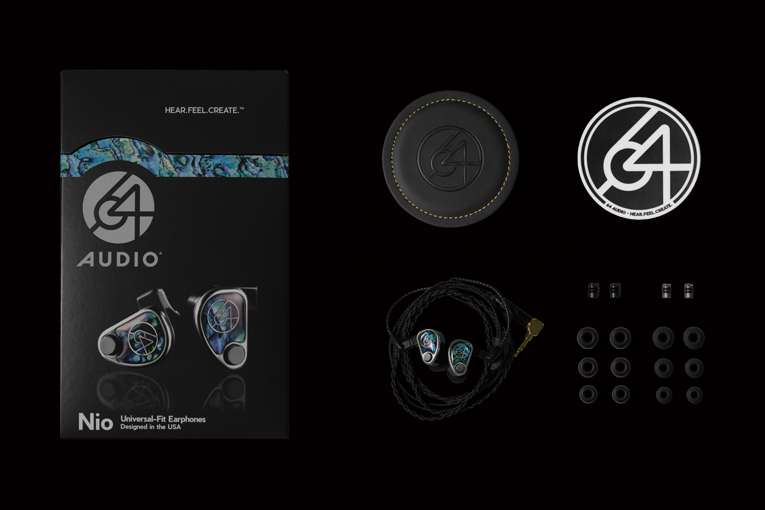 Even though the Nios include six different sets of tips, none of them sealed properly in my roughly 10%-oversize ear canals, so I had to use SpinFit CP100 XL single-flange silicone tips. The fact that the earphones are a little on the chunky side, without the long, tapered design common to many models with over-ear cable routing, didn’t help. But for earphones with nine drivers per side, they’re not as big as I might have expected, and with the third-party tips, they were comfortable. The braided cable tangled easily, though.

The low impedance seemed to present no problem when I plugged the Nios straight into my Samsung Galaxy S10 phone; the earphones played plenty loud even with conservatively mastered material. Still, I did most of my listening using an AudioQuest DragonFly Cobalt DAC-headphone amp, just to make sure the Nios were getting plenty of power. 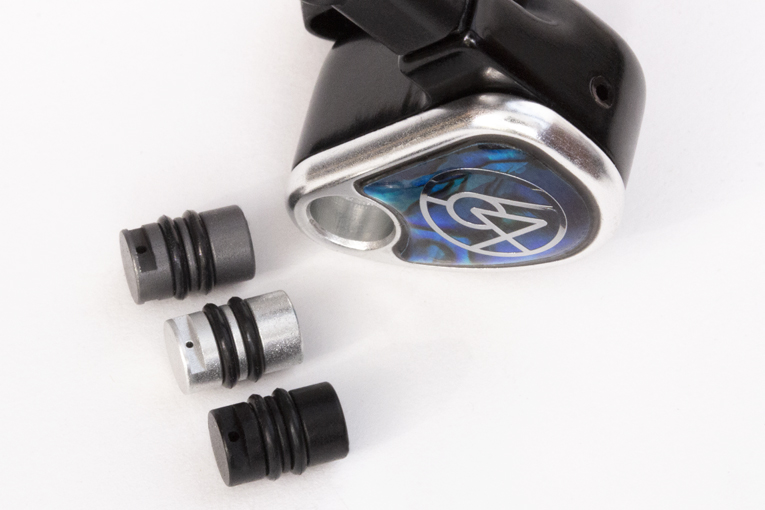 As for the claimed added comfort of the APEX modules, I didn’t notice it. Personally, I find many earphones of conventional design to be quite comfortable despite the seal, although I know there are a lot of people who find earphones very uncomfortable, so maybe they’d get more benefit.

I used the M15 APEX modules for a couple of weeks because that’s what 64 Audio installs in the factory, so I assume they think it’s the best sounding. I did like the sound at first listen, but it was definitely a little on the bassy side, kinda like the earphones I’ve heard that are designed along the lines of the Harman curve. So I decided to put on a very familiar tune with a prominent bass line: the Police’s “When the World Is Running Down, You Make the Best of What’s Still Around” (Zenyatta Mondatta, 16-bit/44.1kHz FLAC, Polydor/Qobuz). The MX modules tamed the bass, but they sounded a little too bright to me. The M20 modules gave me even more bass, so those went back in the box. I went back and forth between the M15 and MX modules and settled on the former.

And that sound made me pretty happy. Sting’s bass line on “When the World Is Running Down” sounds rather robotic through most audio systems, but through the Nios, I could hear the very subtle variations he threw in. The same sense of subtlety in a not-so-subtle tune came through during the guitar “solo,” which features toms that are hard-panned into the left and right channels for a cool ping-pong effect. I’d say that the snare drum and Sting’s vocals were about 1dB too bright for my taste, but overall, I was pretty thrilled with the Nios’ rendition of this tune—although nothing will ever top the thrill of hearing it for the first time on my BSR turntable and homemade acoustic-suspension speakers with full-range drivers from RadioShack. 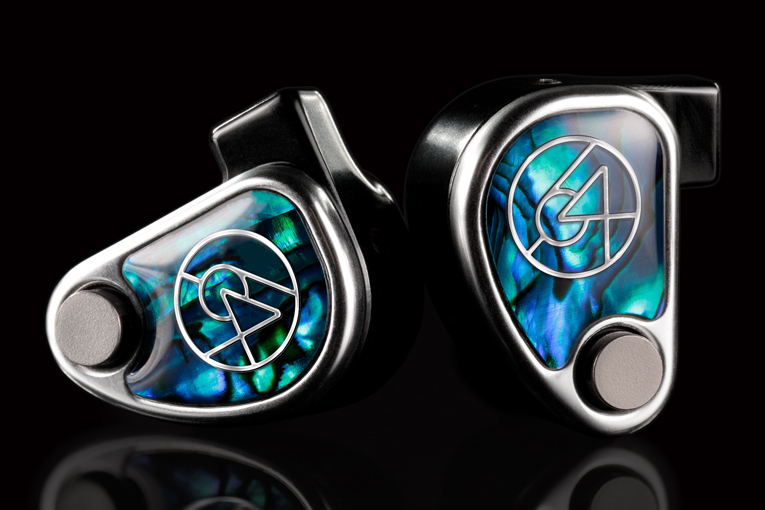 Lake Street Dive’s newest album, Obviously (16/44.1 FLAC, Nonesuch/Qobuz), has very pumped-up bass relative to the band’s more acoustic past releases, and the Nios with the M15 modules added a little more, but the bass was still tight as hell, never boomy. On “Lackluster Lover,” the bass punctuates the melody with precise rhythmic hits, and the Nios started and stopped perfectly on these, with no overhang or ringing. I loved the clarity the Nios provided, placing each of the song’s many, many overdubbed parts in its own sonic space and highlighting the extreme spatial differences between the lo-fi piano that opens the tune, the upright piano that supports the rest of the tune, and the heavily distorted and EQ’ed guitar—it sounds more like a power tool than an instrument—that accents the ends of the choruses.

I’ve listened to Stanley Turrentine’s classic recording of “Salt Song” (Salt Song, 16/44.1 FLAC, CTI/Qobuz) a zillion times since a friend put it on a mixtape for a road trip I took back in 1983 or so. Although the recording was done by jazz’s most famous engineer, Rudy Van Gelder, it’s much more heavily produced and doesn’t sound as good as, say, Van Gelder’s recordings of John Coltrane. The Nios seemed to accentuate its flaws, making Turrentine’s tenor sax sound a little too bright, and elevating Ron Carter’s double bass to almost modern pop levels. So the Nios seem to be the kind of transducers that aren’t real forgiving of bad recordings—but audiophiles understand that. And the detail they brought out was captivating; I found it very easy to follow Airto Moreira’s soft conga playing in the left channel and Billy Cobham’s intricate rimshot and hi-hat work in the right channel. Guitarist Eric Gale’s light but rhythmically insistent comping sounded as clear as it would if I were sitting in the studio with the band. 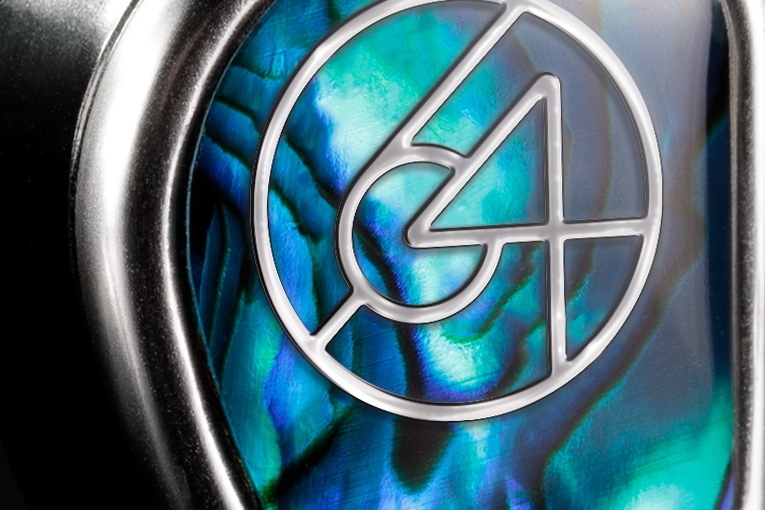 Call me lazy, but when I need a classical recording to test headphones with, I keep coming back to the recording of Berlioz’s Harold in Italy, Op. 16, by the San Diego Symphony conducted by Yoav Talmi, with violist Rivka Golani and violinist Igor Gruppman (16/44.1 FLAC, Naxos/Qobuz), just because I like it so much and it sounds good. In the fourth movement, “Allegro Frenetico (Orgy of Brigands),” I really enjoyed the heft that the Nios lent to the double-bass section, which made the movement sound as ominous as I think it’s probably supposed to. And the clarity of the viola and flute melodies that trade off with the louder orchestral sections was pretty stunning. I think the cymbal clashes were perhaps a dB or two brighter than I’d have liked, but that’s just one instrument out of an entire orchestra; I’d have been reluctant to change anything about the way the Nios sounded on this recording.

I compared the Nios mostly with the Meze Rai Penta earphones ($1099), which are less expensive than the Nios but are similar in that they combine a single dynamic driver with multiple balanced armatures—although “only” four balanced armatures per earpiece versus the Nios’ eight.

As I’ve been doing during my vacation from Tracy Chapman’s “Fast Car,” I used “Free Man in Paris,” from Joni Mitchell’s Court and Spark (24/192 FLAC, Rhino-Elektra/Qobuz), as my tonal-balance test. This isn’t supposed to be music where you notice the bass, but the lines of session whiz Wilton Felder really sounded great with the extra few dB of kick that the Nios gave them, and it didn’t detract from the voices and guitars at all. Again, the upper mids and treble seemed slightly elevated, and the overall balance was a little “smiley,” with lightly accentuated bass and treble.

The Rai Pentas sounded somewhat similar, but with what seemed like 4dB less bass on average, and perhaps a dB or two more treble. But their sound wasn’t as radically brighter as that description might make it seem. I heard subtle tonal differences in the treble, too. The Rai Pentas seemed to accentuate the upper mids, which highlighted Mitchell’s lead vocal more, while the Nios put more emphasis on the lower treble, which brought out the guitars and cymbals more.

The 64 Audio Nios are a very nice-sounding set of earphones, and I found them pretty easy to live with, too. My guess is that most audiophiles will enjoy the detail and general neutrality of the mids and the highs—and I bet audiophiles who don’t buy into the concept that high-end headphones shouldn’t have plenty of bass will love them.