Sendy Audio is a China-based brand well known to headphone enthusiasts and totally unknown to anyone else. At a quick glance, Sendy’s new Apollo headphones ($499, all prices USD) look a lot like the Sendy Peacock headphones ($1499)—but a longer look tells you that there are big differences between these two models. A glance can’t tell me which headphones are better, but it does show me several reasons why one of them costs three times as much. 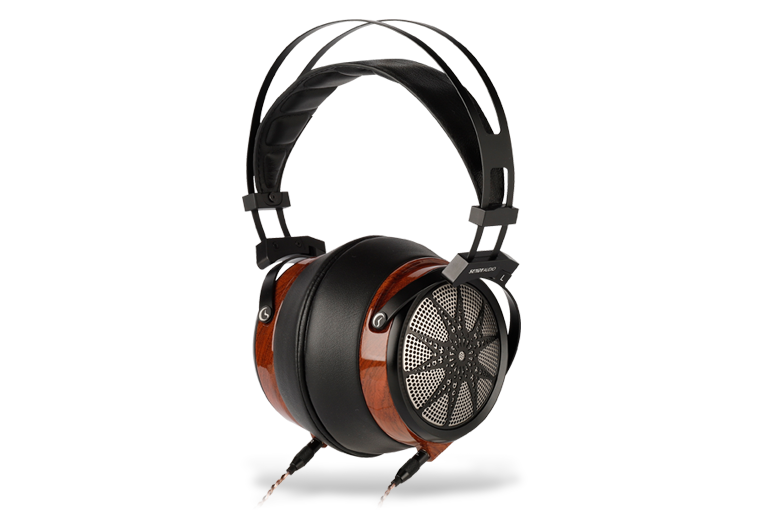 The Apollos are a lot less luxe, too. The headband and earpads seem to be covered in protein leather (there was no press release available at the time I wrote this), while the Peacocks’ headband and earpads are covered in Gucci-quality goatskin. It’s hard to tell if the Apollos’ earcups are made from plastic or wood, but the Peacocks’ earcups are made from gorgeous, exotic-looking wood of some sort. The Apollos’ cable connects to the earpieces with generic 2.5mm plugs, while the Peacocks use four-pin XLR connectors with spring-loaded collars for a firm connection.

Still, none of these luxury touches means the Peacocks necessarily sound better than the Apollos—and I actually prefer the matte-finish look of the Apollos. 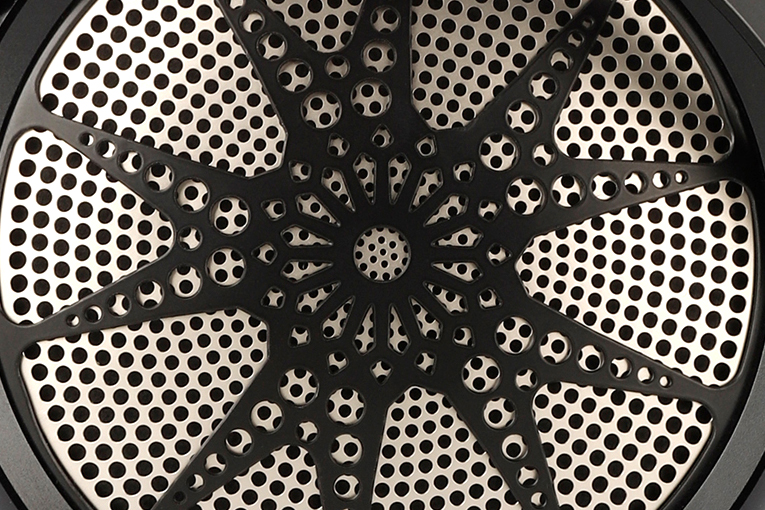 I didn’t have specs for the Apollos when I wrote this, but you can get the full story by clicking the link for the measurements at the top of this review.

The Apollos have the same molded case as the Peacocks, except it appears to be made out of leather-grained plastic instead of the buttery real leather used for the Peacocks’ case. You also get a fabric carrying sack. The cable is 5.75′ (1.75m) long, and it’s tipped with 2.5mm plugs on the headphone end and a 4.4mm balanced Pentaconn connector on the source end. A 4.4mm-balanced-to-3.5mm-unbalanced adapter cable is included.

The Apollos are super comfortable—they’re fairly light, the earpads couldn’t be much softer or smoother on the face, and the clamping force is light. That said, as with the Peacocks, they’re made for smaller heads than mine, and I had to bend and shape the metal headband fairly aggressively to get the bottoms of the earpads to seal correctly around my ears. Seal isn’t as critical on open-back headphones, but still, this is an unnecessary inconvenience, and many buyers may feel a little queasy about bending their $500 headphones. 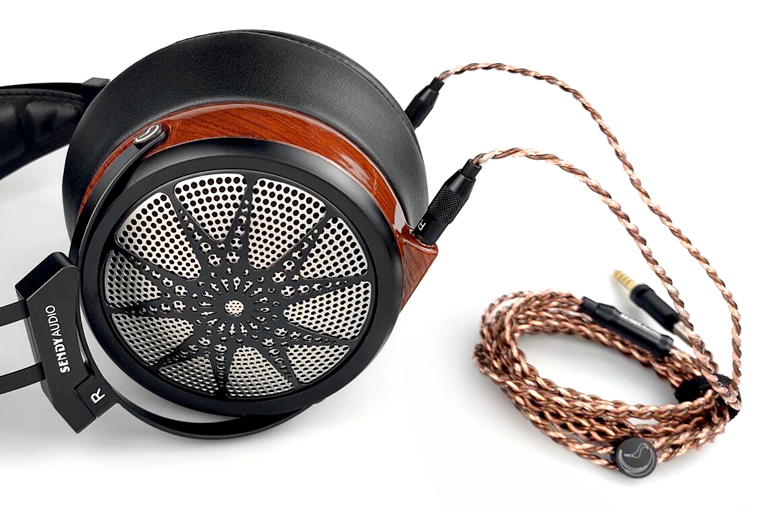 Plugging the Apollos straight into my Samsung Galaxy S10 gave me plenty of volume even on conservatively mastered tunes like Camille Thurman’s version of “September in the Rain” (Waiting for the Sunrise, 320kbps Ogg Vorbis, Chesky/Spotify). I think it’s safe to say just about any source device can drive these headphones.

Incidentally, while I’ve made my skeptical position on headphone break-in clear, Sendy asked that I give the Apollos 100 hours of break-in, so I did.

I love the above-mentioned version of “September in the Rain” so much that it inspired me to learn the song, so I know it well and it’s a good place to start. What I heard on this tune through the Apollos was a very different sound than I’m used to hearing. There was a lot of bass drive—it was not boomy, but I would call it insistent. In fact, the double bass sounded like it was close-miked rather than recorded binaurally with a dummy head. Thurman’s voice was definitely dialed down in the “mix” (although this is binaural, so technically it’s not a mix), and it sounded somewhat soft, but with a little extra zip in the fricatives—i.e., the higher frequencies of her voice. The electric guitar had some of that same insistent drive as the bass: lots of oomph but very little twang on top. Thurman’s saxophone sounded huge, but unusually full and round for a tenor—kind of like a baritone sax played in its upper register.

I was reminded of the sound of the bass-focused Campfire Honeydew earphones, which have a lot of bass, a dialed-back midrange, and a little extra zip in the mid-treble to balance out the bass. 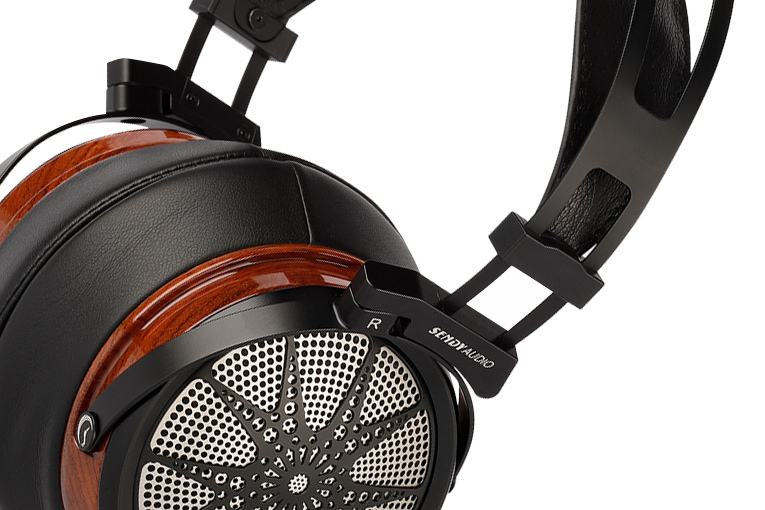 Wanting something twangy that would test the Apollos’ upper mids and lower treble, I put on Joni Mitchell’s “All I Want” (Blue, 16-bit/44.1kHz FLAC, Rhino-Warner/Qobuz), which puts a dulcimer in the left channel, an acoustic guitar in the right, and Mitchell’s voice in the center. As with the Camille Thurman track, the Apollos lent this folky tune a sense of drive and energy I don’t normally hear; the strong bass gave it a stronger sense of groove and heft. However, it definitely softened the mids. Mitchell’s voice sounded unusually smooth, taking on more of the tone of a jazz singer, and the acoustic guitar sounded very full and mellow, like a big dreadnought guitar with year-old strings. The voice and instruments actually sounded like the microphones had been moved closer to them; the elements in the mix seemed more directional and focused. Same with “This Flight Tonight” from the same album—the drive and intensity of the dual acoustic guitars on this tune reminded me of the acoustic opening of Metallica’s “Battery,” but I can’t really say it sounded the way I expect a Joni Mitchell recording to sound.

Thinking about “Battery” made me wonder how the Apollos would sound with classic heavy rock, so I put on the Cult’s “Edie (Ciao Baby)” (Sonic Temple, 16/44.1 FLAC, Beggars Banquet / Qobuz). This is a colossal-sounding mix, soaked in reverb, with overdubbed strings, layered acoustic and electric guitars, and a huge drum sound. Singer Ian Astbury’s voice sounded unusually smooth, but with what sounded like a few dB of extra zip in the treble. The acoustic guitars and strings sounded unusually mellow—kind of like the strings did on old Motown records. The kick drum had loads of drive, but the snare drum didn’t have a lot of snap, and the epic guitar solo didn’t really take off because it sounded somewhat muted.

I compared the Apollos with a few other open-back models: the Peacocks (just to see how they stack up against the less-expensive model), the HiFiMan Sundaras (originally $499, now $349), and the Grado RS2x headphones ($550).

Patricia Barber’s “Trouble Is a Man” (Clique, 24/176.4 FLAC, Impex/Qobuz) made the differences among these headphones readily apparent. Through the Apollos, Barber’s voice sounded soft and mellow but subtly sibilant on top. The piano sounded especially dark, as it might on a circa-1958 jazz recording, and the hi-hat and cymbals seemed muted. Once again, though, the double bass had tons of drive and a very strong sense of groove. 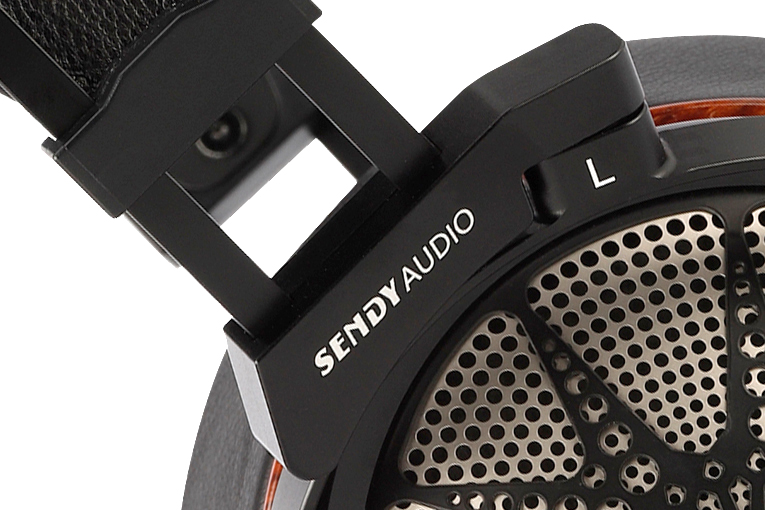 In comparison, the Peacocks made Barber’s voice sound more open (although more sibilant), brought a greater sense of space and detail to the piano and drums, and also brought out more of the string and finger noise in the double bass. The HiFiMan Sundaras amped up the detail in the cymbals even more, gave me more of a sense of “air” and breath with the double bass, and created more of a realistic sense of ambience around the piano. With the Grados, I actually exclaimed “Whoo!” when I put on the same recording, because while the Grados definitely lacked drive in the bass, they seemed to bring out the most detail and the most natural sense of space.

When I reviewed the Sendy Peacocks, I praised them for a detailed yet balanced sound, but cautioned that they might sound a little too mellow for some audiophiles. The Apollos sound considerably mellower than even the Peacocks, meaning they’re definitely not for detail-oriented audiophiles. Yet I hear some great things in them—the sense of drive and rhythm, the intensity they lend to bass and the lower notes of guitar. I do know some people who consider average headphones way too bright—people who loved the AudioQuest NightHawks, for example—who would probably enjoy the Apollos.