AKG N60 NC Wireless headphones measurements can be found by clicking this link.

Noise-canceling headphones are greatly prized by commuters and frequent fliers, as they subdue engine noise and other intrusive sounds. Up until now, most noise-canceling (NC) headphones have been over-ear designs, to provide a better seal. But commuters also like headphones that are smaller and lighter and can be folded up into smaller packages. AKG has therefore decided to release on-ear models, wired and Bluetooth, that can be folded up yet provide enough NC to be viable. Their Bluetooth model, the N60 NC Wireless ($299.95 USD), provides wireless transmission backed up by a wired analog cable mode. Design-wise, AKG has achieved this goal, but I have some minor criticisms, and a major criticism of something that will be, for some, a deal breaker. 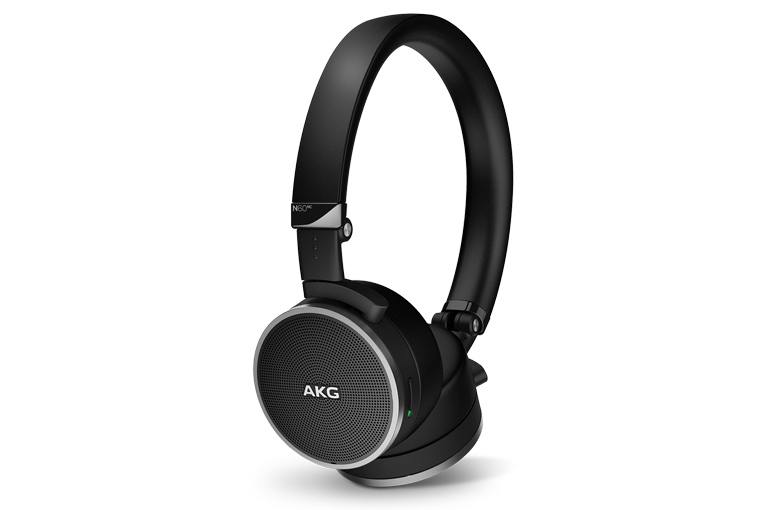 To complement AKG’s idea of compact build, the N60 NCs’ packaging, too, makes the greatest use of a small space. An outer slipcase measuring only 8.4” x 7” x 3” contains a sturdy black slipcase housing a pull-out drawer that contains the headphones and accessories -- a pull tab for each compartment makes them easy to open. Open the drawer to find the headphones nestled atop a lined neoprene carry case -- not a hard case, but far sturdier than the usual vinyl sleeve. Inside this are two cables -- a USB-to-Micro-USB for charging, and a proprietary 2.5-to-3.5mm audio cable with a one-button switch for toggling between phone calls and music. Under a cardboard insert beneath the carry case is an airplane adapter and two pamphlets, one about safety and instructions, the other explaining the one-year limited warranty. Which brings up the first nit I’ve picked: The tiny fonts the instruction pamphlet is printed in will challenge the eyesight of even the youngest buyers. I had to go by the drawings alone, and my intuition and experience with other headphones.

The N60 NCs are black, with aluminum trim. There are some plastic parts, but there’s also some metal. The headband going into the armatures is metal and has the usual slider mechanism for adjustment, as well as numerical markings for each detent position -- you no longer have to depend on only the sound and feel of each detent. Ready for use, the N60 NCs measure 7.5” x 6” x 2.5”, but their earcups swivel to fold flat, then fold inward -- the result is a semicircle measuring only 6.75” x 5” x 1.5”. The round earcups are 2.5” in diameter, their inner openings just 1” in diameter. The memory-foam earpads are a generous 7/8” thick and are covered in leather-like plastic, but the headband’s padding is skimpy.

The inner surfaces of the arms are discreetly labeled L and R, and at the bottom of the left earcup are the Micro-USB charging port and the 2.5mm audio jack. The navigational controls are on the right earcup. At the bottom of the cup is a single button for Play/Pause, Next, and Previous. Push it in to play or pause, or move it right or left to go to the next or previous track. The second nit is the Power/Bluetooth button -- it’s right behind Pause/Play, and the two buttons are identical in size, shape, and feel. It was all too easy to turn the headphones off when I was trying to skip a track. 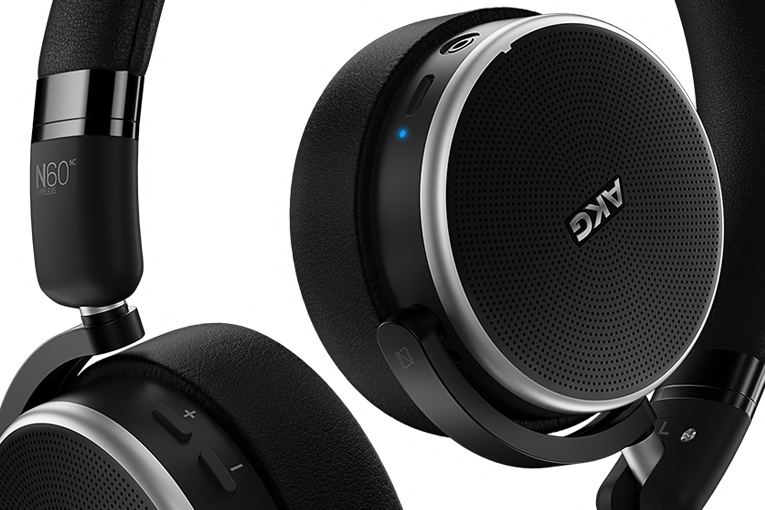 The Power button has several positions for its various functions, with a different LED for each. When you power on the headphones, one LED glows a solid blue; move the button down, and this LED starts blinking: you’ve entered Bluetooth pairing mode. If you’re using the analog wired connection, moving the Power button to its center position ignites a green LED, indicating that you’re now in NC mode. (Note: In Bluetooth mode, NC is always on -- it can’t be defeated -- but in analog mode it can be switched on or off.) When you power on or off, musical tones sound to confirm your choice. At the top of the right earcup, just behind the arm post, are the volume + and - buttons. Those seem great places for them, right where an index finger can easily find them.

The N60 NCs are powered by a rechargeable lithium-polymer battery. AKG says that a full charge of this battery will provide 15 hours of playback in Bluetooth mode.

AKG specifies the N60 NCs’ frequency range as 10Hz-22kHz, their sensitivity as 111dB at 1Hz, their input impedance as 32 ohms, and their maximum input power as 30mW.

The deal killer: In what would be a normal position for use, the N60 NCs were comfy but wouldn’t stay on my head. Nor was this when I was at the gym or performing any sort of physical activity: If, while listening when seated, I leaned forward to read something, they slid off. The only way to get them to stay was to move them back to the crown of my head, which makes me look stupid -- but in that position they did stay on. I’m guessing the N60 NCs’ fit will depend on the size and shape of the user’s head and amount of hair. (My head is of medium to large size, and my hair is very thin on top.) Bottom line: Try wearing these headphones before you buy.

The N60 NCs had a normal range of wireless operation -- at my place, about 24’ indoors, 30’ outdoors. All buttons functioned as they’re supposed to, though the close proximity of the Power and Play/Pause buttons was annoying. And the earpads became hot and fatiguing all too soon. After just half an hour, I was ready to take a break.

The AKG N60 NC Wirelesses’ active noise canceling worked very well at lower frequencies, reducing the sounds of motors, rumbles, and other low-pitched noises to negligible levels. Midrange and upper-frequency sounds, which are affected more by the acoustical isolation of the earpiece body than by the ANC circuitry, fared less well -- probably because, like most on-ears, the N60 NC Wirelesses don't have as much mass or as effective a seal on the ear as over-ear models. As for the three playing modes, forget about wired without NC: The bass disappeared, and the sound was thin and anemic, no matter what sort of music I played. I heard very little difference between the two NC modes, Bluetooth and wired, though wired seemed a bit more focused and full.

I’d heard some wonderful things about the N60 NCs’ sound, so I was disappointed to hear aggressive highs and reticent, often unfocused lows. The midrange was swell -- rich and transparent -- and voices were a constant delight. The soundstage was narrow and often flat, depending on the recording. Overall, I found the sound not very appealing. That, and the heat from the earpads’ pressure on my ears, made for short listening sessions. 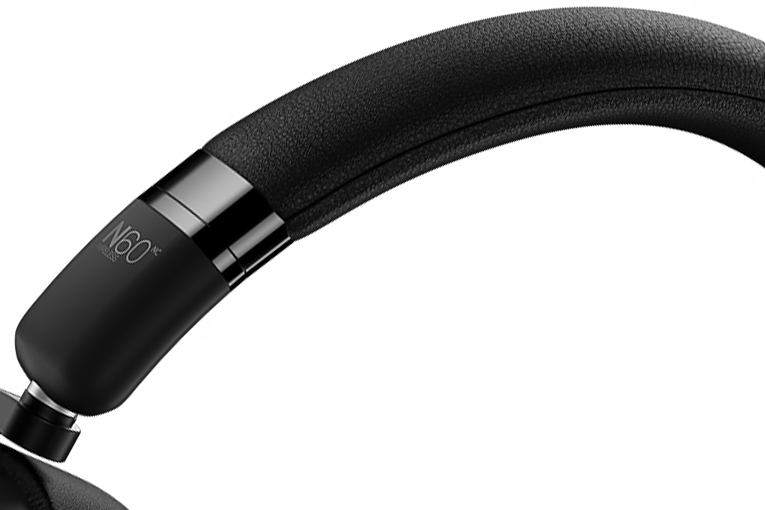 A word about my listening tests: My Astell&Kern AK Jr music player uses an early version of Bluetooth not supported by the AKGs, so I had to listen to it wired. As long as I had the cable plugged in, I decided to do some listening from the Yamaha A/V receiver that I use as a preamp, using its Pure Audio mode. My iPod Touch, which includes a later version of Bluetooth, paired instantly with the AKGs.

The orchestrations of British composer Sir Arnold Bax (1883-1953) are colorful and varied. A 1978 BBC studio recording of his Winter Legends has just been released, with solo pianist John McCabe and the BBC Northern Symphony Orchestra conducted by Raymond Leppard (16-bit/44.1kHz ALAC, Lyrita/Naxos of America). The first movement opens with an arresting snare-drum tattoo that leads to a drum roll, then the piano’s own percussive entrance. The AKGs did very well with all that, but the violins later in the movement sounded somewhat tinny, and the trumpets were harsh rather than pungent. The bass was weak and a bit muddled, and the big bass-drum strokes in the middle of the movement, so impressive through speakers, were anemic.

Speaking of bass drum, I turned to “The Imperial March” from Star Wars, from Erich Kunzel and the Cincinnati Pops’ Great Film Fantasies (16/44.1 ALAC, Telarc). But those great thwacks had little impact through the N60 NCs, and without that, this dramatic music fell flat. The orchestral strings sounded better than in the Bax, but the upper percussion sounded harsh and indistinct. 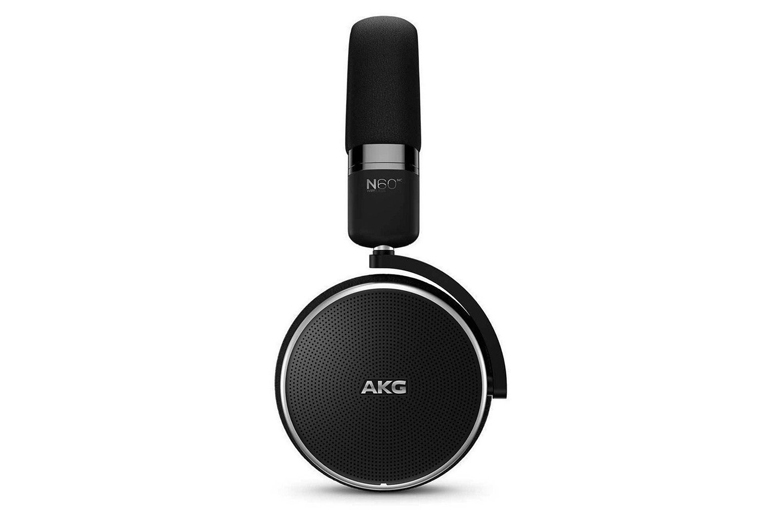 I then listened to my favorite Doris Day album, Day by Day (16/44.1 ALAC, Sony), impeccably recorded in mono. With this album, the N60 NCs scored high points. I heard nuances in this great singer’s voice that revealed an appealing vulnerability. The orchestra is lush and mostly in the midrange, and there was no noticeably absent bass. The title song came across as still the best version I’ve heard of this oft-recorded song.

I then called up one of my rock favorites: “Insane, Insane Again,” from the J. Geils Band’s Freeze-Frame (16/44.1 ALAC, EMI). The track includes a wide variety of percussion instruments clanging and banging behind the vocal. The AKGs’ extreme transparency helped this cut, but the absence of bass dragged it down again and again. I can’t imagine rock lovers liking the N60 NCs very much -- they’ll miss the bass.

The more I listened, the less I liked AKG’s N60 NC Wireless noise-canceling headphones. They sent me scurrying back to Koss’s BT540i’s and Audio-Technica’s new ATH-DSR9BTs -- not to mention to my MartinLogan speakers -- to make sure I was being fair to them. If you like a bright, transparent sound, need NC, don’t care too much about bass, and have a head shape that the AKGs can cling to without falling off, you might like them. But if you like lots of well-focused bass (who doesn’t?), you’d best look elsewhere. AKG’s effort to produce a featherweight headphone that sounds good has been only partially realized.

MishraV 9 days ago Eardrum Suck: The Mystery Solved!
This is exactly what i was searching for, I bought qc35ii few months ago and ...

E.J. Ramos 14 days ago Headphone Equalization Using Measurements
Thank you so much for taking the time to do this. Thanks to you, my ...

Mauro 16 days ago How Will Headphone Testing and Reviewing Change in the 2020s?
@Brent ButterworthThat’s a very nice topic!! And you have the right amount of criticism to address ...

Brent Butterworth 16 days ago How Will Headphone Testing and Reviewing Change in the 2020s?
@MauroI'm definitely considering it!

Mauro 16 days ago How Will Headphone Testing and Reviewing Change in the 2020s?
@Brent ButterworthThat's a good point..I guess it might depend on the most common scenario for that ...