Audio-Technica is vigorously promoting its new Pure Digital Drive headphone models, the ATH-DRS7BT ($299 USD) and ATH-DSR9BT ($549). But lest you feel left out in the cold by those prices, A-T also offers the dandy ATH-SR6BTBKs for $199 -- $100 less than the ATH-DSR7BTs, which I reviewed in July, and an appealing alternative about which there’s much to like. One catch -- the ATH-SR6BTBKs are available only at selected Best Buy stores and Best Buy’s website. 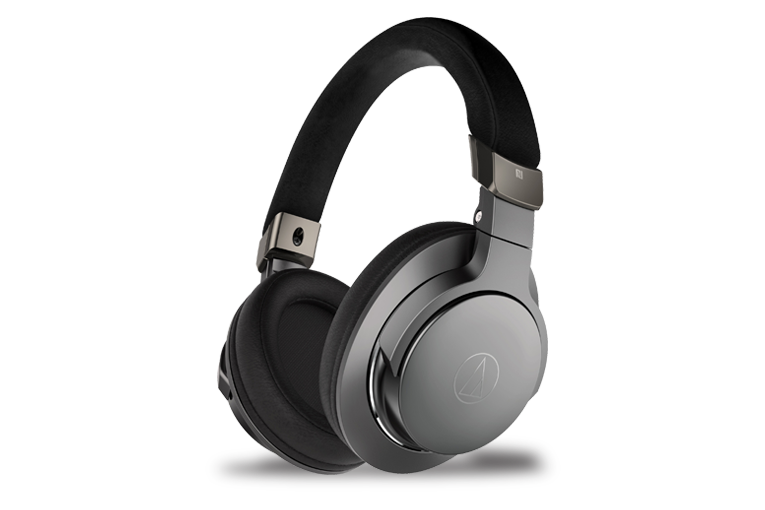 The outer box is thin cardboard, with photos of the headphones, selling points, and specs. Inside is a black box of slightly heavier cardboard; lift its lid to reveal the ATH-SR6BTBKs, nestled in soft black cloth arranged over a plastic platform. Under the platform are the accessories: a soft carrying pouch, a 3.3’-long USB-to-Micro-USB charging cord, a 3.9’-long 3.5mm-to-3.5mm audio cord with an inline control for volume and pause/play, a quick-start guide, and a big booklet of safety instructions in many languages. The warranty is a generous two years.

There seem to be differences of opinion as to whether the ATH-SR6BTBK is an on-ear or over-ear model -- A-T says on-ear, but Best Buy’s site says it’s both. It will depend on the buyer’s ears. Although my own ears are fairly large, the oval earcups fit snugly over them (though not over my lobes). Good padding makes this less of a problem than you might think. Including padding, each earcup measures 3.75” x 3” overall, its inner opening 2.25” x 1.5”. 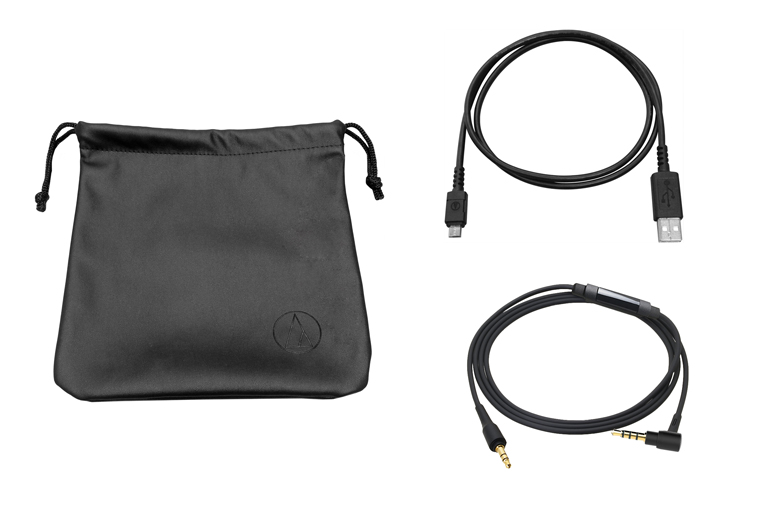 The sliding arms joining earcups to headband have click detents, though these aren’t as solid as on some other models. I found it best to put the headphones on, then adjust the arms. But once they were adjusted, the fit was solid.

The ATH-SR6BTBKs are made mostly of plastic, with a bit of metal in the hinges, and the look is sleek and modern. Perhaps in response to past complaints, there are no identifying decals. Instead, there’s a discreet and classy A-T logo on each earcup, but no identifying lettering on the headband. The right and left cups are indicated in small letters on the inside of each hinge. The headphones fold up into a three-quarter moon that makes them easy to fit into the pouch or a gym bag, backpack, etc. Folded up, they measure 5.5” by 5.5” by 3”. They weigh 8.4 ounces and come in one color: black.

The controls are fairly straightforward. On the right earcup, just below the hinge, is an on/off/pairing switch. Confusingly enough, the LED that lights up to tell you what’s going on is on the other earcup. It’s tiny, as seems to be the current trend; it’s easily seen only in a dark room. 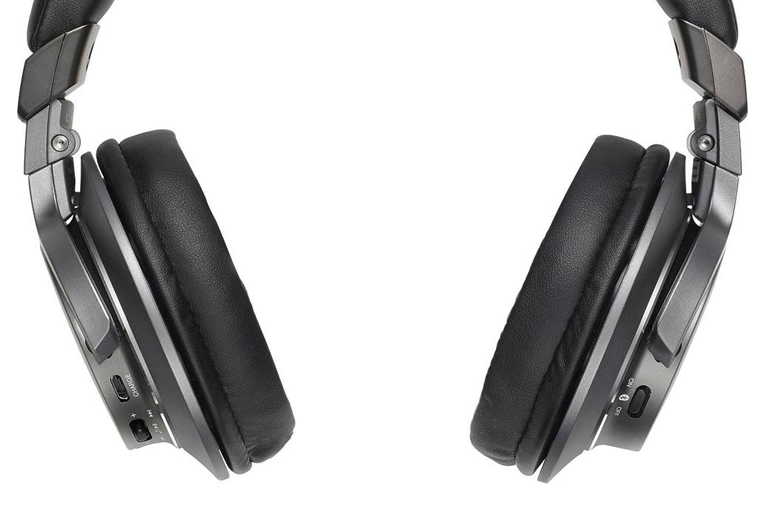 On the left earcup, right below the hinge, are a Micro-USB port for charging, a 3.5mm jack for the audio cord, and a spring-loaded joystick that controls all playback functions. Press it in and out for Pause or Standby (if you’re using a phone). Push it quickly forward or back to skip to the next or previous track. Hold it forward or back a few seconds to raise or lower the volume. It protrudes enough to be pretty easy to find with your left thumb when you’re wearing the ’phones.

Audio-Technica says that the ATH-SR6BTBKs’ lithium-polymer battery should last 30 hours on a full charge, that the range of wireless operation is 33’, and that the driver diaphragms are 1.75” (45mm) in diameter. They also specify a sensitivity of 100dB, a frequency response of 5Hz-40kHz, an impedance of 39 ohms, and Bluetooth v.4.1.

The ATH-SR6BTBK headphones fit snugly but didn’t pinch -- wearing them for long periods was quite pleasant, whether for physical activity or more sedentary listening. The range of wireless operation in my house was about 24’, outdoors a little over 30’. Pairing was a snap -- and if your Bluetooth device has nearfield communication (NFC), it will be even easier. When you first turn them on, the headphones automatically go into pairing mode; you then just select them on your device. Once I’d paired them with my iPod Touch, I never had to do it again. However, I could never pair them with the Astell&Kern AK Jr, which no doubt uses a much earlier version of Bluetooth. 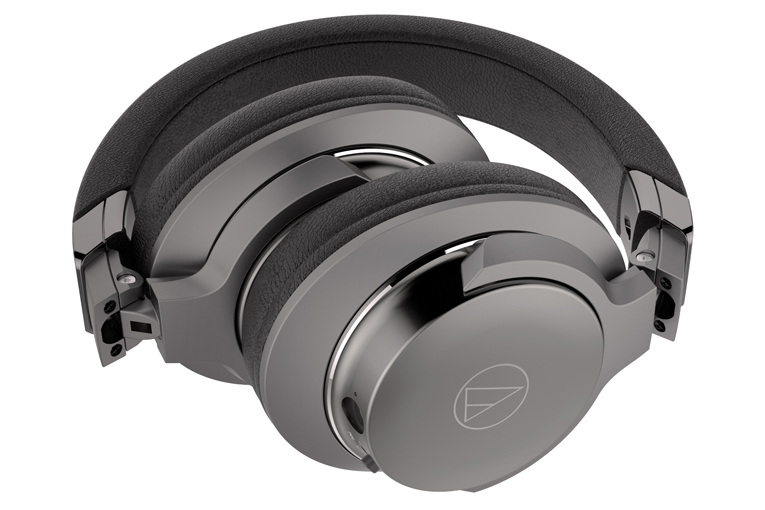 The controls are placed just where your fingers would naturally fall when searching for them, though I had a little trouble with the joystick. It was too easy to push it forward or back while pushing it in -- instead of pausing, I sometimes inadvertently skipped a track. This became less of a problem with time, as I got the hang of it. I prefer separate volume up and down controls, and a toggle switch for play/pause and next/previous. The tiny LED glows blue to let you know the headphones are on, but it does nothing to signal that you’ve turned them off -- no red LED, voice prompt, or anything. You just have to assume that if there’s no light, it means off.

When I read the ATH-SR6BTBKs’ frequency-response spec, which indicates that they go down to 5Hz -- well into the infrasonic range -- I expected to be blown away by bass. It wasn’t like that at all. Sound throughout the audioband was very even, with bright, clean-as-a-whistle mids and highs, and well-focused bass that at first seemed reticent. If you like thumping bass, these headphones are not for you; but if you’re tired of thumping bass, they might be your antidote. “PDA,” from the Backstreet Boys’ This Is Us (16-bit/44.1kHz ALAC, Sony/Legacy), which I use for a two-lap, cool-down walkaround at the end of my gym workout, had less swagger and propulsion than through my workhorse Koss BT540i headphones, but a bit more clarity. The song is full of asides from the backing singers, and through the ATH-SR6BTBKs I could easily hear each one. The A-Ts’ overall sound was precise, natural, even, and transparent. Voices had great presence, and highs lots of sheen with no shrillness. In classical music, such as Ernest Ansermet and the Swiss Romande Orchestra’s recording of Rimsky-Korsakov’s Scheherazade (16/44.1 ALAC, Decca), the violins were light and airy, the brass pungent, the upper percussion zippy. 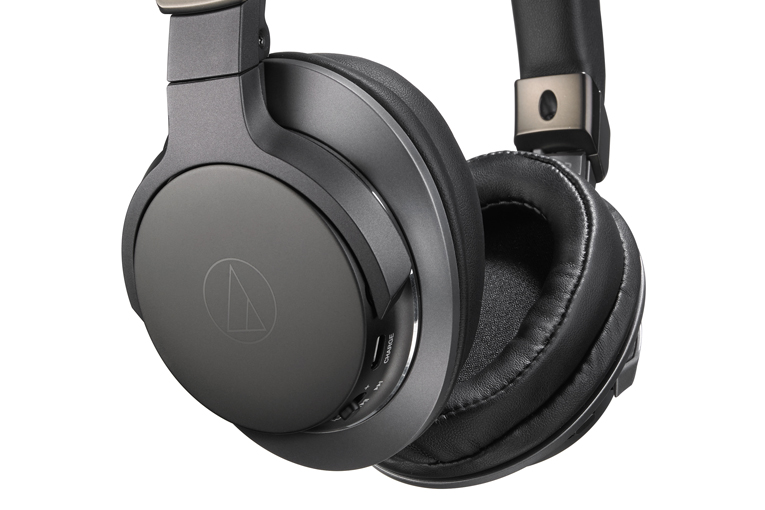 In any track from the Ben Folds Five’s Whatever and Ever Amen (16/44.1 ALAC, ORG Music), Folds’s piano had nearly unbelievable presence -- that “you are there” thing that I’ve heard all too seldom -- and the doo-wop backing vocals in “Fair” had rare definition.

The awesome synthesizer bass in the title track of Thisisashakedown!’s Love Kills (16/44.1 ALAC, Reversed Image Unlimited) was not overpumped, as it sounds through most headphones, but instead had savage definition that gave it more urgency than usual. 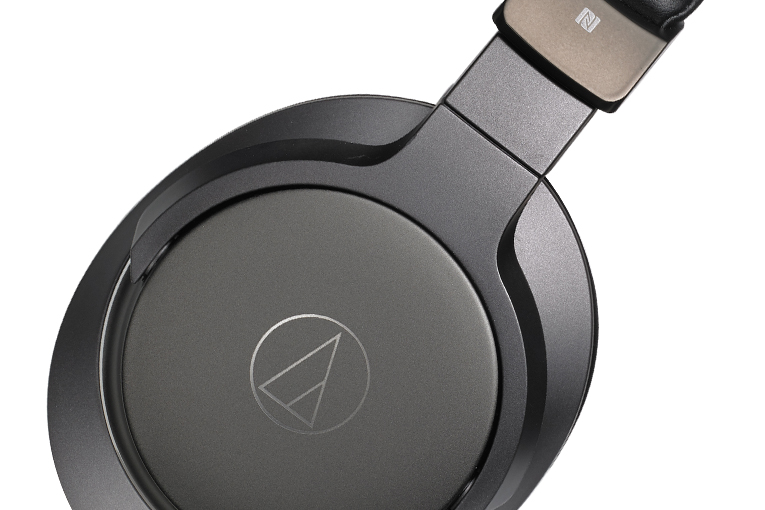 That was all Bluetooth listening. Late in the game, I decided to use the ATH-SR6BTBKs’ wired connection. There was the bass I’d missed, and the highs were rolled off a bit more. In wired mode, the ATH-SR6BTBKs had a warmer sound while retaining many of the qualities I’d heard in Bluetooth mode. It’s almost like having two sets of headphones, with different but equally desirable audio signatures. In either mode, the generous cushioning provided reasonably good passive noise canceling -- in noisy environments, I could still hear the music clearly.

Audio-Technica’s ATH-SR6BTBK headphones look good, fit well, and sound excellent. They sound different in wired mode than they do in Bluetooth, but both sounds are excellent, making them two pairs of headphones in one. I still have trouble operating that little joystick, but that’s a small problem in the face of so many positives. If you can afford $100 more, consider A-T’s Pure Digital Drive ATH-DSR7BTs, which I give the slight edge, especially in Bluetooth mode. But buying the ATH-SR6BTBKs won’t leave you out in the cold. For a set of all-purpose headphones, they’re an excellent and affordable choice.

MishraV 9 days ago Eardrum Suck: The Mystery Solved!
This is exactly what i was searching for, I bought qc35ii few months ago and ...

E.J. Ramos 14 days ago Headphone Equalization Using Measurements
Thank you so much for taking the time to do this. Thanks to you, my ...

Mauro 16 days ago How Will Headphone Testing and Reviewing Change in the 2020s?
@Brent ButterworthThat’s a very nice topic!! And you have the right amount of criticism to address ...

Brent Butterworth 16 days ago How Will Headphone Testing and Reviewing Change in the 2020s?
@MauroI'm definitely considering it!

Mauro 16 days ago How Will Headphone Testing and Reviewing Change in the 2020s?
@Brent ButterworthThat's a good point..I guess it might depend on the most common scenario for that ...