Blue Ella headphones measurements can be found by clicking this link.

Few companies have the technical chops or the commitment to get into the headphone biz the way Blue Microphones did a couple of years ago. Its first headphones, the Mo-Fis, combined a radically new design, a fresh technical twist, and superb sound quality. Blue’s new Ellas ($699 USD) replace the Mo-Fis’ conventional dynamic drivers with planar-magnetic panels, which have enjoyed renewed attention thanks to the recent efforts of such companies as Audeze and HiFiMan. 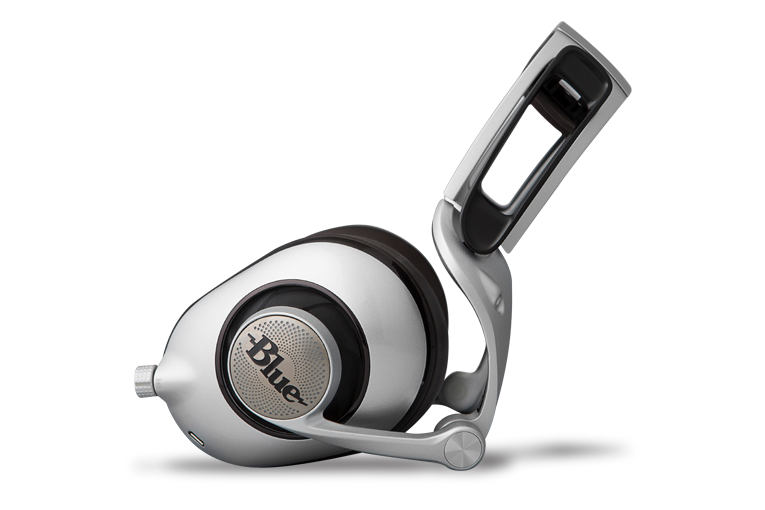 Blue’s “radically new design” was a pair of cantilevered, spring-loaded arms that hold the earpieces and are attached to the headband with hinges. Additional, swiveled arms let you position the earcups over your ears. When you wear this relatively heavy frame, it looks as if a praying mantis is grasping your skull. But the clamping force is precise yet light -- like the original Mo-Fis (since replaced by the Lolas and Sadies), the Ellas are gentle on the ears.

The “fresh technical twist” is a built-in 250mW amplifier. There are lots of good reasons for building amps into headphones. First and foremost, it reduces the effects of the source device on the headphones’ sound. Output impedances of headphone amplifiers, whether standalone or built into phones, computers, etc., can vary from about 0.1 to more than 100 ohms -- a difference that can significantly alter the frequency response of many headphone drivers. Blue tuned the Ellas to the characteristics of their internal amp; their frequency response should remain consistent no matter what source component you use.

Using an internal amp also allowed Blue to include a bass-boost switch, the effects of which can be more precisely tuned and sonically benign than they’d likely be with passive (i.e., unamplified) headphones. Turning a barrel switch that encircles the connector for the Ellas’ cable selects one of three modes: passive (amp off), amplified, or amplified with bass boost. 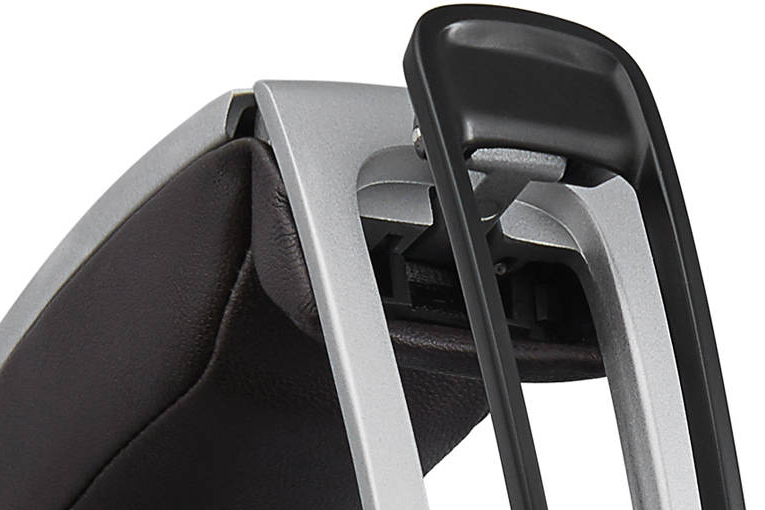 The 50-by-50mm planar-magnetic drivers give the Ellas the potential to exceed the Mo-Fis’ sound quality. Planar-magnetics are generally regarded as producing more detailed, delicate, and spacious midrange and treble responses than dynamic drivers, though dynamic drivers typically put out more powerful, punchy bass. What’s a little unusual is that the Ellas are a closed-back design -- most planar-magnetic headphones are open-back. This helps overcome the planar drivers’ relative lack of bass.

The Ellas come with two cables. One, for portable use, measures 3.9’ (1.2m) and incorporates an inline microphone/remote that provides Play/Pause/Talk control with iOS and Android devices, and adds volume-control capability when used with iOS devices. The other cable is 9.8’ (3m) long and is intended for home use. Both are tipped with a portable-friendly 3.5mm plug; a 3.5mm-to-1/4” adapter is included. A USB-to-Micro-USB charging cable is included, as is a drawstring carrying pouch.

The Ellas are an unusual design with a fit significantly different from headphones wearing any other brand. They’re heavy (by my measurements, 480gm vs. 252gm for NAD’s Viso HP50s), but their clamping force is fairly light. They don’t seem to make quite as firm a seal below the ears as many other headphones do, though they seemed voiced to compensate for this -- there was no lack of bass. The only real downside to their fit was that the isolation was less than average: it was easier to hear outside sounds, which some listeners prefer. Whether or not you like the way they feel will be a personal preference; I found them comfortable but a little heavy. They’re also bulky, and don’t fold up for travel; they’ll be impractical for portable use, unless you carry them in a backpack or suitcase. 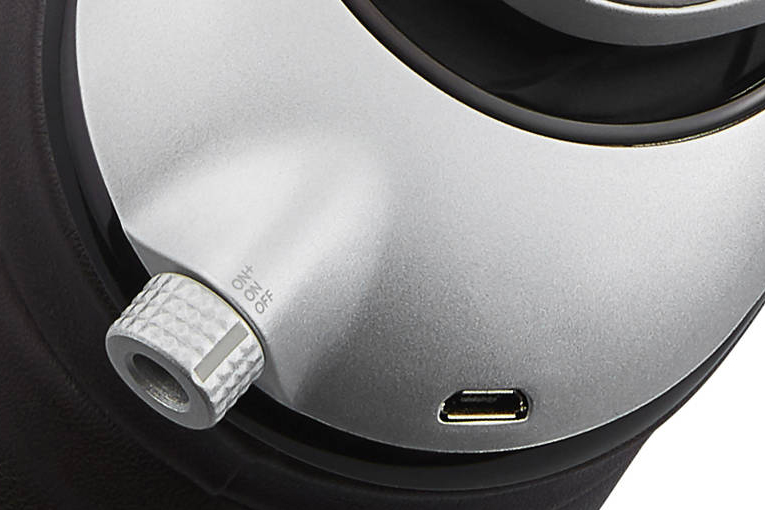 The internal amp requires that the Ellas be recharged through a Micro USB connector. The headphones are rated for 12 hours’ running time on a charge of three to four hours, and they automatically shut down after a few minutes of inactivity, to conserve battery life.

When I reviewed Blue’s first headphones, the Mo-Fis, I thought they were well-voiced, neutral-sounding headphones. The Ellas are all that, too, but they’re much more.

In the opening bars of “Dawn,” from the Mahavishnu Orchestra’s The Inner Mounting Flame (320kbps, Columbia/Legacy//Ogg Vorbis/Spotify), the detail and subtleties I heard in the bass line with the Blue Ellas were clearer than through any other headphones I had on hand -- including the Beyerdynamic Amiron Homes, the NAD Viso HP50s, and the Oppo Digital PM-2s. The electric bass, Fender Rhodes electric piano, and hi-hat and cymbals sounded as if I were sitting right in the middle of the band as they recorded -- and the Ellas made it pretty obvious to me that at least the rhythm tracks were recorded live in the studio. The electric guitar and electric violin, which carry the melody, sounded exceptionally vivid and clear. In this case, the Ellas seemed to achieve an elusive goal that recording engineers strive for throughout their careers: to bring every instrument up in the mix without obscuring the other instruments, and without appearing to change any instrument’s tonality. 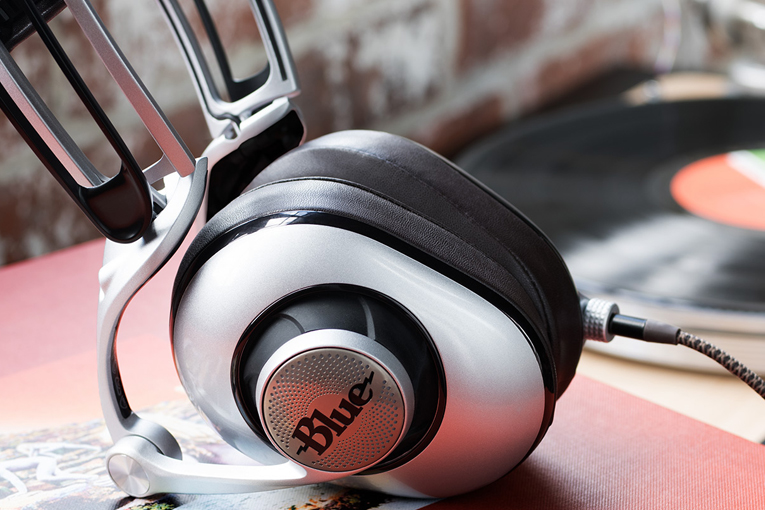 I tried the Ellas’ bass-boost mode with “Dawn,” but it made the bass sound bloated. No surprise there: The Inner Mounting Flame’s lightning-fast passages demand precision. But “Your Favorite Thing,” from Sugar’s File Under: Easy Listening (16-bit/44.1kHz WAV, Merge), demands nothing more than to rock -- and without the Ellas’ bass boost activated, it kind of didn’t. In fact, the bass boost made this track sound right, increasing the bass level without introducing any boom or annoying resonance. Through the Oppo PM-2s and NAD HP50s, “Your Favorite Thing” just didn’t have the kick it needed. And again, the Ellas sounded more lively than the other headphones I compared them with. They made every instrument and voice sound more vivid while introducing no noticeable colorations.

With “Train Song,” from Holly Cole’s Temptation (16/44.1 WAV, Blue Note), the Ellas’ sound was similar to that of the Oppo PM-2s, just -- once again -- a bit more vivid. Both delivered a great sense of space with this track’s percussion instruments, which zip around the soundstage like enraged honeybees. But through the Ellas, the highs were clearer without sounding boosted; they were, almost paradoxically, smoother and more present. I could hear more detail in the shaker, and Cole’s voice stood out more, without displaying tonal colorations that, through lesser headphones, might make the voice stand out more. 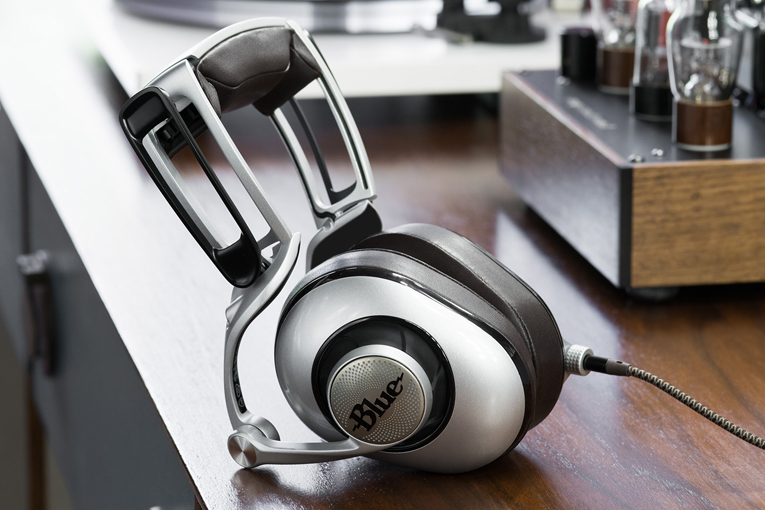 For closed-back headphones such as the Ellas to match the spatiality of open-back headphones such as the PM-2s is no mean feat, so I tried a tougher test: “This Little Light of Mine,” a binaural vocal-group recording from Dr. Chesky’s Ultimate Headphone Demonstration Disc (16/44.1 FLAC, Chesky JD361). Through good headphones, this recording delivers perhaps the most natural presentation of space I’ve heard in three decades of critical listening. The placement of the voices on the soundstage was about the same with both headphones, though the PM-2s seemed to capture a little more of the space’s natural reverb. Again, though, the voices sounded more distinct through the Ellas.

I noticed two anomalies in the Ellas’ measurements that I thought demanded subjective investigation. First was a mismatch in the responses of the left and right channels beyond what could be explained by typical measurement disparities. The effects of this mismatch didn’t seem noticeable with stereo recordings, but just to make sure, I connected the Ellas to my Tascam DP-008EX multitrack recorder, so I could pan various sounds to the center with equal level in left and right channels. (The recording I used for this test features direct-injected electronic piano and electric ukulele plus a miked conga track.) Even when soloing the various instruments, I couldn’t hear enough of a difference in the left/right balance of the Ellas vs. the NAD Viso HP50s to declare the Blues’ measured imbalance subjectively significant. 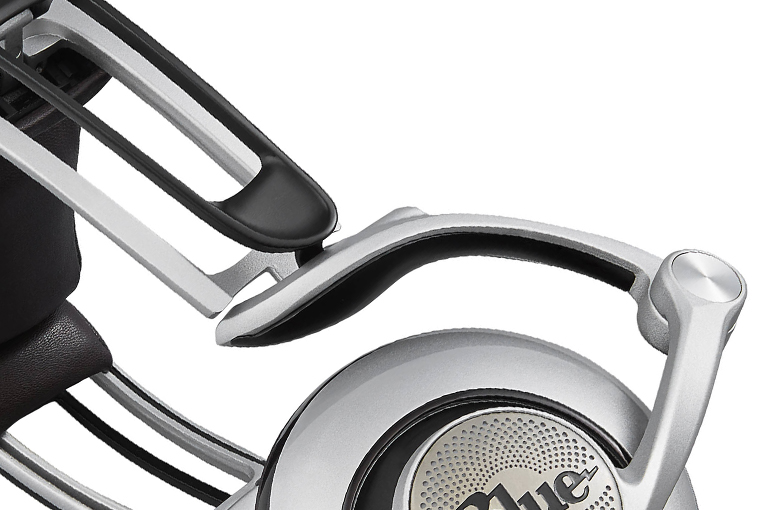 The second anomaly I measured was fairly high distortion at frequencies below 50Hz. I couldn’t hear bass distortion with any of the rock or jazz tunes I listened to, even when I played them loud. But when I put on “Love Lockdown,” from Kanye West’s 808s & Heartbreak (16/44.1 FLAC, Roc-A-Fella), which begins with deep, loud bass tones that dip down to 35Hz, I noticed that the lowest tone had a more pronounced high-frequency component through the Ellas that I hadn’t heard through the NADs. I ran a spectral analysis of this intro on both headphones, and confirmed that the Ellas had about 6.5dB more output at 70Hz, an octave above the lowest tone’s fundamental. Whether this was a distortion harmonic or a reflection of the two headphones’ differing frequency responses is hard to say. Regardless, it was subtly noticeable but sonically benign.

The Ellas didn’t play super-loud from portable devices. The maximum volume from my iPod Touch, which plays a fraction of a decibel louder than an iPhone 6, was usually about one click louder than I like to listen to -- but with my Samsung Galaxy S6 phone, I sometimes couldn’t get as much volume as I wanted.

In my experience, the Blue Ellas were unique in their ability to present all elements of a stereo mix cleanly and clearly, without resorting to unnatural-sounding emphasis of any part of the audioband. It’s hard for me to imagine who wouldn’t like their sound, and I think they’d be a good choice not only for casual listening but also for monitoring recordings. Downsides? I wish they played about 3dB louder, and their measured performance doesn’t impress me. Also, their design is unusual enough that I recommend you try on a set before you buy. Fortunately, I’ve seen Blue’s headphones available for demo at listening kiosks in stores that sell consumer electronics and/or musical instruments -- give them a spin and see what you think.