As a longtime reviewer who’s on all sorts of press lists, I get dozens of pitches every month to review headphones. Sometimes I wake up to find three or four new pitches in my e-mail -- with more likely to come later in the day. I confess the sheer volume of pitches sometimes makes me a little too eager to delete them, and that’s what I did when I got an e-mail about Ausounds, a company that launched in August. Fortunately, I stumbled upon them at the 2019 Rocky Mountain Audio Fest, and that’s where I saw the AU-Flex ANC earphones.

I’m glad I did, because the AU-Flex ANCs ($199.95 USD) definitely don’t seem like something that came from a startup company. They incorporate Sony’s LDAC codec -- something rare outside Sony products, and currently the highest-quality Bluetooth codec available (although you’ll need an Android phone or tablet to access LDAC). Instead of the usual single dynamic driver, they use a hybrid design: a dynamic driver for the bass, and a tiny planar-magnetic driver for the mids and treble. This is definitely not a case where someone just had their logo slapped onto some earphones they found at the Hong Kong Electronics Fair. 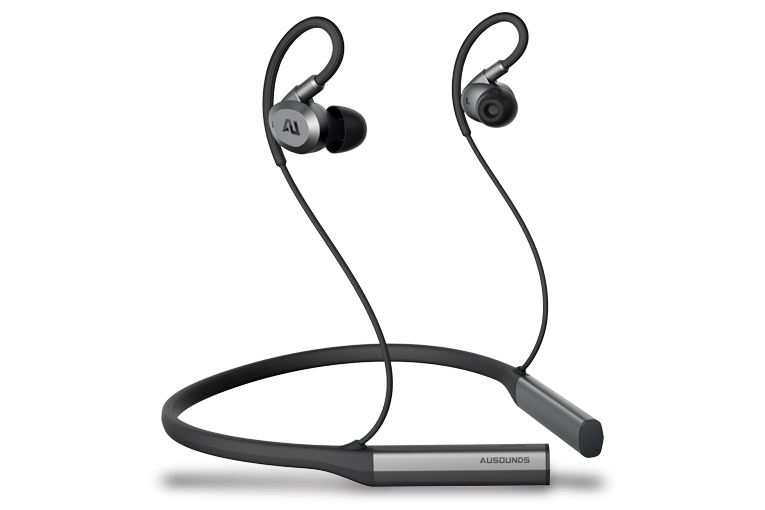 In another sign that Ausounds is a serious effort, they publish the AU-Flex ANCs’ measured frequency response in the user guide -- and that response shows the telltale squarish bass bump of the Harman curve, the response shown in research by Harman International to deliver sound that most users favor. I’m told that getting that bump to roll off from its max at around 100Hz back down to flat by about 300Hz isn’t easy; most earphones and headphones have a more gradual bass resonance roll-off that starts somewhere in the 100Hz range and ends by about 800 or 900Hz.

The AU-Flex ANCs have active noise canceling with a listen-through mode that lets you hear the sounds around you. They’re IPX5-rated, which makes them splashproof and should make them sufficiently sweat-resistant for most users. The backs of the metal earpieces are magnetized, and when you stick them together, the earphones pause playback to conserve battery life.

As long as you’re not bothered by the short cables and the plastic neckband that houses the electronics, the AU-Flex ANCs would seem to have it all. Let’s find out if they live up to their promise.

The AU-Flex ANCs include a cloth travel sack, silicone eartips in three sizes, and a USB charging cable.

The largest of the AU-Flex ANCs’ tips fit my ears OK, but I opted to use Periodic Audio Hydrogen silicone tips, because those fit me perfectly and gave me the best sound from the AU-Flex ANCs. 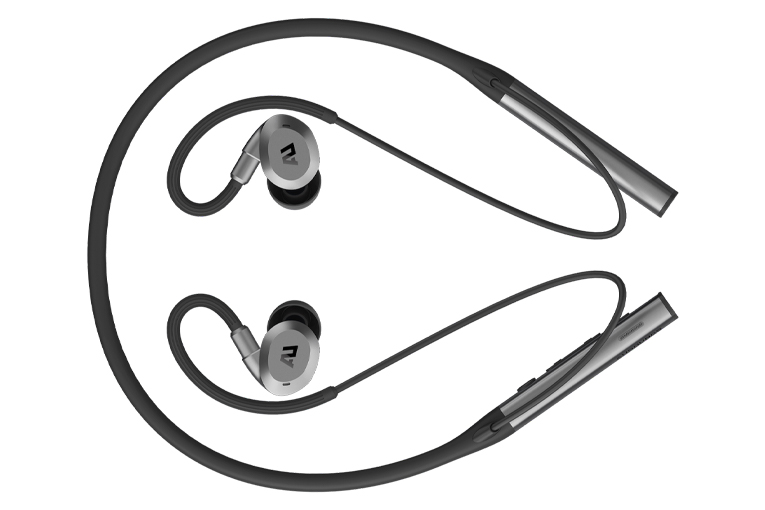 I used the AU-Flex ANCs for my flight to the recent CEDIA Expo, and found that they deliver a modest but useful amount of noise canceling. I could still hear the low roar of the 737’s engines, but it was reduced by what sounded like about 8dB -- which at least was enough to make the music I was listening to significantly easier to hear. The button that turns ANC on and off, and activates the listen-through mode, is easy to find by feel on the neckband, something I appreciated when requesting my black coffee from the flight attendant. I also noted that using ANC didn't seem to change the sound significantly, something my measurements confirmed.

I also used the AU-Flex ANCs for everything from riding Los Angeles’s Orange and Red transit lines to walking my Shih Tzu, and always found them comfortable and easy to use.

To my ears, the AU-Flex ANCs sound generally neutral, but with slightly lightweight bass. That may be a pro or con, depending on your taste and the music you prefer, but I don’t think anyone will find the AU-Flex ANCs to sound unnatural or substantially colored.

For example, “Sweet Georgia Bright,” from jazz saxophonist Charles Lloyd’s live album Rabo de Nube (16-bit/44.1kHz FLAC, ECM/Qobuz), sounded generally balanced, and Lloyd’s tenor sax and Jason Moran’s grand piano sounded particularly clear. The soundstage had a nice, broad sense of space. The bass was well-reproduced, but reduced in volume by a decibel or two compared with what I’m used to hearing. And whether because of a subjective effect caused by the slightly attenuated bass or because of a bump in the mid-treble response, drummer Eric Harland’s ride cymbal definitely sounded too bright and ringy, instead of the mellower, jazzier sound I’m used to hearing from him. 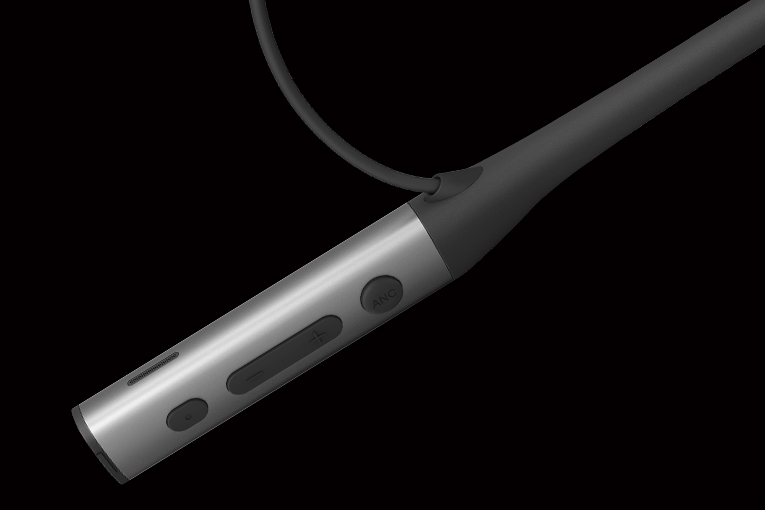 I tried listening to the same cut through the JBL Live 200BTs ($69.95) -- the only other set of neckband-style earphones I had on hand -- and heard some of that same brightness, but also an exaggerated bump in the bass, which gave the 200BTs a “boom and sizzle” sound that seemed to me less enjoyable than the AU-Flex ANCs. It’s possible I’d have preferred that sound for certain types of music, but because most of my listening is to jazz, and most of the recordings I listen to sound fairly natural, the AU-Flex ANCs’ tonal balance works better for me.

In fact, more raucous music did work a little better with the AU-Flex ANCs. The remastered version of the Replacements’ “I’ll Be You” (Don’t Tell a Soul, 16/44.1 FLAC, Rhino/Spotify) sounded just about right through the AU-Flex ANCs. The overall balance was natural, with perhaps an extra decibel of treble for my taste, although the bass level seemed just about right. Singer Paul Westerberg’s voice sounded clear and uncolored, the guitars kicked ass, and the snare had a perfect balance of fullness and sonic crack.

“Stellar,” from bass trombonist Jennifer Wharton’s Bonegasm (320kbps Ogg Vorbis, Sunnyside/Spotify), also sounded just a hair on the bright side; the four trombones (Wharton plus three tenor ’bones) were easy to distinguish, and again the sense of space seemed natural. I wanted a little extra oomph in the bass trombone and the electric bass, though, so I opened the equalizer app on my Samsung Galaxy S9 phone. The AU-Flex ANCs didn’t need much help. Even turning the Bass/Treble knob in the Basic EQ adjustments on the app just one notch toward the bass was actually too much EQ, dulling the sound too much for my taste. I switched to the Advanced settings, which offer EQ in one-octave bands. I boosted the bass at 63 and 125Hz by 2dB each, et voilà! The tonal balance was pretty much perfect. 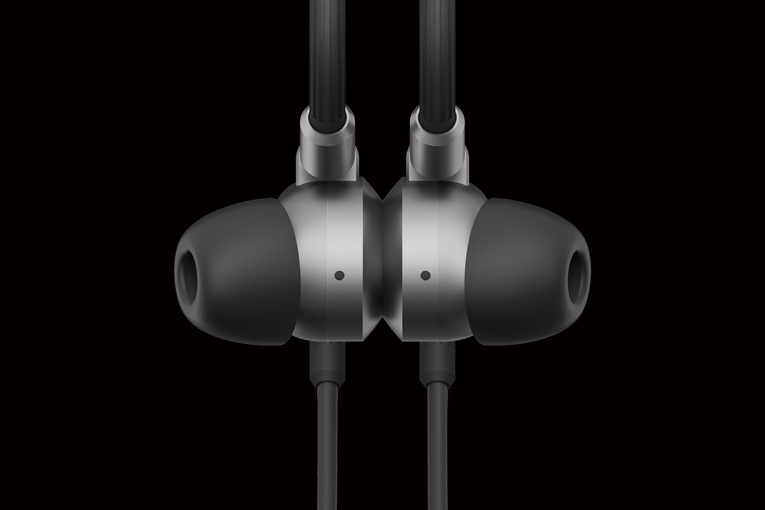 I noted above that the suitability of the AU-Flex ANCs’ bass balance may depend on the genre of music, so I tried hitting the Spotify Rap Caviar playlist to see how they’d handle big bass. “Vibez” by DaBaby (Kirk, 320kbps Ogg Vorbis, Interscope/Spotify) sounded good, with very clear voices, super-spacious electronic effects, and ample but not booming bass. I imagine the bass was a few dB quieter than the artist intended, but I liked it this way. The electronic hi-hat sound -- the same insistent, high-speed ticking heard on probably thousands of hip-hop records -- was a little sizzly, though.

I auditioned the AU-Flex ANCs for my usual listening panelists: LeRena Major, a Los Angeles saxophonist who’s held several positions in the music business and is a voting member of the National Academy of Recording Arts & Sciences, and John Higgins, who holds a master’s in music performance from USC and has served as a frequent contributor to Wirecutter and Sound & Vision.

LeRena, unused to neckband-style earphones and now enamored with true wireless designs, didn’t like the feel of the AU-Flex ANCs -- “This doesn’t seem like a 2019 product,” she said -- but she described the sound as “very serviceable, with clear voices and kind of a big ambience.” But for her, the earphones’ subtly attenuated bass made them sound a little thin. John generally agreed; he reported that “cymbals can have too much sizzle” through the AU-Flex ANCs, and he thought the bass was a little boomy.

The convenience of Bluetooth earphones can’t be denied, not even by audiophiles who usually prefer big, over-ear cans. True wireless Bluetooth earphones are in vogue, but we’re still struggling to find a pair that really sounds good instead of just decent. So if you want a pair of Bluetooth earphones, and you want good sound, the AU-Flex ANCs are a good option -- especially if you’re willing to make a subtle adjustment in your phone’s EQ app.

Geoffrey Morrison 30 minutes ago Greetings!
@oratory1990We're still working out the details for measurements. I probably won't be doing them personally. ...

oratory1990 9 hours ago Greetings!
Hi!
Will you be doing measurements as well?