Sonarworks True-Fi measurements using headphones mentioned in this review can be found by clicking this link.

Anyone who’s tried a few different headphones knows their sound can vary wildly. Some sound harsh and thin, others dull and bloated, and many sound good but have a few annoying quirks. When you consider these differences, and that most headphones are now connected to smartphones and computers, it’s not surprising that many apps have emerged to equalize ’phones for better sound. One of those is Sonarworks’ True-Fi ($79 USD), an app for Windows or Apple OS that I first encountered at the 2018 Consumer Electronics Show. 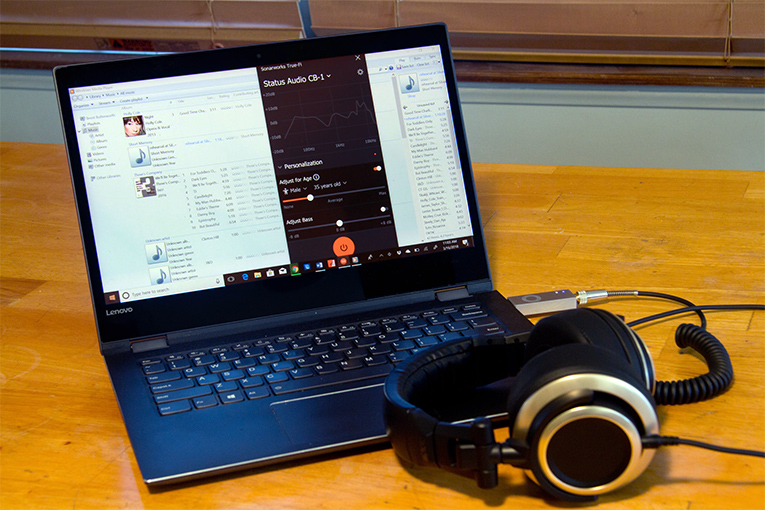 Apps like these are great in concept. The problem is, how do the people who create the software determine what equalization response curve to shoot for? Solid research into what constitutes the best response curve for headphones has begun to emerge, but the more research papers you read, the more you realize that a lot of the people making audio products don’t read many audio research papers. I’ve encountered at least one company that attempted to EQ headphones to a flat curve, as if they were speakers, and others that boost the treble too much or add soundstage virtualization that sounds highly unnatural. In such cases you’re better off using the free EQ apps built into phones and computers to tweak the sound to your taste.

Sonarworks, headquartered in Riga, Latvia, goes into no detail about their target response curves or how they derived them; at CES, they told me they based the target response on calibrations they’ve done of studio monitors, and through consultations with recording engineers. The company says its Reference professional headphone-calibration software is currently endorsed by 14 Grammy-winning audio engineers and used in more than 25,000 recording studios.

The True-Fi app at last count offered correction curves for 140 different headphone models. For most noise-canceling (NC) models, two curves are included: one for NC on, one for NC off. You’ll find headphones from most major brands and some smaller ones, though some brands are disproportionately represented; for example, the app currently lists 26 Sennheiser but only two HiFiMan models. You can select curves for a few models to be displayed on the control screen, making it easy to switch quickly between them rather than having to search through all 140 models. Sonarworks plans to update this list with more headphones -- they did so twice while I was working on the review -- and they solicit requests for headphones their customers would like to see added. 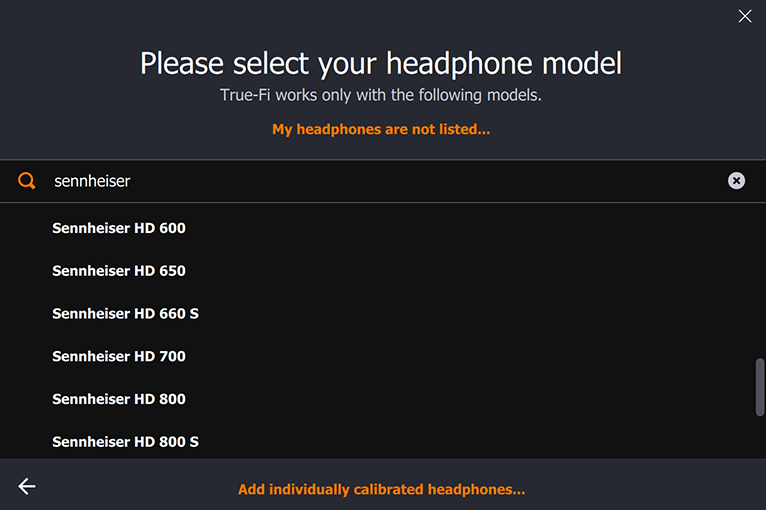 Sonarworks also sells 13 models of individually pre-calibrated headphones. If you buy a pair of these and a copy of True-Fi, the company provides a curve created specifically for the individual set of headphones you buy.

Two more features are offered, both of which, as I’ll explain later, are likely to come in handy. First is an Adjust for Age feature, in which you select your gender and age (between 21 and 60, in one-year increments). Adjust for Age boosts the treble to compensate for the degree of hearing loss in this range that’s typical for your age and gender; an onscreen slider lets you adjust the level of compensation. Second is a bass slider that lets you boost or cut bass by as much as 8dB.

I installed Sonarworks True-Fi on a Lenovo laptop running Windows 10. Installation was about the same as for any other typical PC app: simple, and it took only a few minutes. A ten-day free-trial version is available.

One of the things I most like about True-Fi is that it works with the music player or service you’re already using -- there’s no need to get used to a new player interface, or settle for a clunky interface to get better sound. The only real limitation to the app’s utility is that it’s compatible with sample rates up to only 96kHz, and is incompatible with DSD files. If you listen to a lot of super-high-resolution music, that could be a problem.

The app is attractively designed, simple, and intuitive; I never had to go looking for a control or scratch my head (or, more likely, pound my desk) wondering how to work it.

For this review I used three different headphone models: Audeze’s LCD-X ($1699), Sony’s MDR-7506 ($99.99), and Status Audio’s CB-1 ($79). I also added an in-ear model, Bose’s noise-canceling QC20 ($249.95). My test rig was the same as I usually use to test large headphones: a Musical Fidelity V90-DAC digital-to-analog converter feeding an Audio-gd NFB1-AMP headphone amp. For the Bose in-ears, I bypassed the test rig and plugged straight into the laptop.

My listening began with the Sony MDR-7506es, a de facto standard in professional audio production and a model that I use several days a week. Having used the MDR-7506es for recording, then compared their sound with what I hear through lots of other audio systems, I know their flaws pretty well. 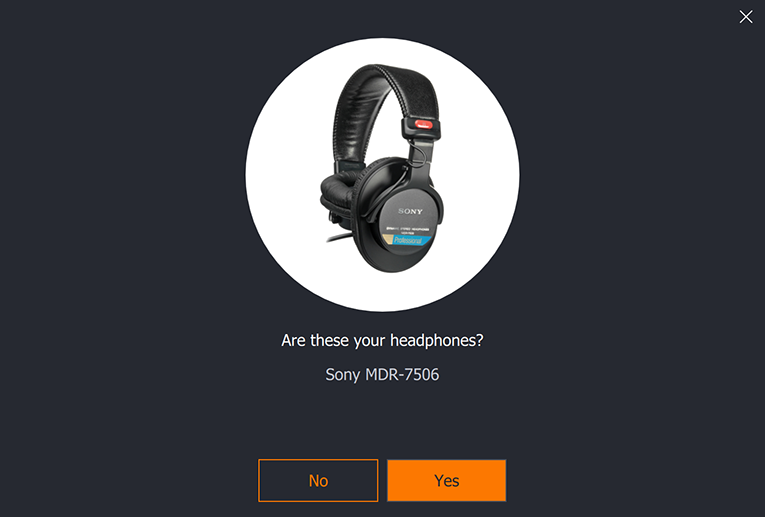 With “Fast Car,” a track that Harman Research uses in most of their product testing, True-Fi didn’t produce a night-and-day difference with the Sonys. I took this to be a good thing -- the MDR-7506es are already great headphones, and conform pretty closely to the ideal over-ear/on-ear headphone response curve Harman has derived from their research. Soon, though, I noticed that True-Fi reduced the treble a bit, which made the Sonys sound slightly softer but got rid of their somewhat sizzly treble and mild sibilance. Without True-Fi, Chapman sounded a bit as if she were singing through a sheet-metal tube; with it, she seemed to be singing in front of me in a fairly dead room. True-Fi didn’t change the MDR-7506es’ bass response, though, which by general consensus is a couple dB too pumped-up. It was clear, though, that True-Fi produced a significant improvement.

I got mostly the same result with “Fast Car” through the other two ’phones. With these three models, all of them at least pretty good, True-Fi tended to more or less maintain the overall bass/treble balance but brought the mids up more, which made voices clearer and more forward in the mix. With the Sony and Status Audio headphones it seemed to bring the lower treble down just a touch, reducing sibilance and producing a more natural warmth; with the Audeze LCD-Xes True-Fi brought the treble up a bit, which gave the sound a lot more life.

But with the Bose QC20 earphones it was a different matter. The QC20s were one of the few (maybe the only) in-ear headphones included in Sonarworks’ EQ curve selection, and were the only model I tried whose sound I liked better without True-Fi. The difference wasn’t dramatic, but True-Fi definitely reduced the bass response and, perhaps subjectively rather than anything I could measure, boosted at least part of the treble region to the point where Chapman’s voice sounded zingy and unnatural. (This was with the earphones’ NC turned on and True-Fi’s NC curve selected.)

The results with Toto’s “Rosanna” were similar, and in some cases more dramatic. Listening to this cut through the Audezes, I thought True-Fi sounded just about perfect. This recording’s treble tends to sound a little sizzly, but through True-Fi the sizzle disappeared -- despite the fact that True-Fi seemed to be boosting the LCD-Xes’ treble. Indeed, when I played “Rosanna” with True-Fi off, the LCD-Xes sounded muffled, the way a speaker sounds when you throw a blanket over it.

The Camille Thurman cut provided a different insight into True-Fi’s performance. This recording, part of Chesky’s Binaural+ series recorded using a dummy head with microphones inserted in its simulated ear canals, has realistic senses of space and timbre that make it very different from a typical commercial recording. “Detour Ahead” proved that True-Fi could let superior headphones shine. With the Audeze LCD-Xes, the sound was much more open, realistic, and natural than with the inexpensive Sony and Status models.

However, one flaw in this recording -- a brushed snare-drum sound that’s too loud in the mix (or rather, not far enough away from the dummy-head mike) -- revealed more interesting aspects of True-Fi. The sound of the brushes on the snare head is not only too loud but too bright, with an edgy quality that a real brushed snare doesn’t have.

Through the Sony MDR-7506es, without True-Fi, the brushes sounded like a hard rain on a tin roof of a shed, heard from outside the shed. Sonarworks helped tame them, but it was still too bright-sounding for me. With the Status CB-1s, True-Fi made the brushes sound more like hard rain on a tin roof heard from inside the shed, but through a layer of attic insulation -- closer to real than with the Sonys, but still not quite there. Without True-Fi, the Audezes’ softer treble made the brushes more listenable, but adding True-Fi boosted the LCD-Xes’ treble and made the sound worse in that regard -- although, overall, I still liked the sound better with True-Fi engaged. 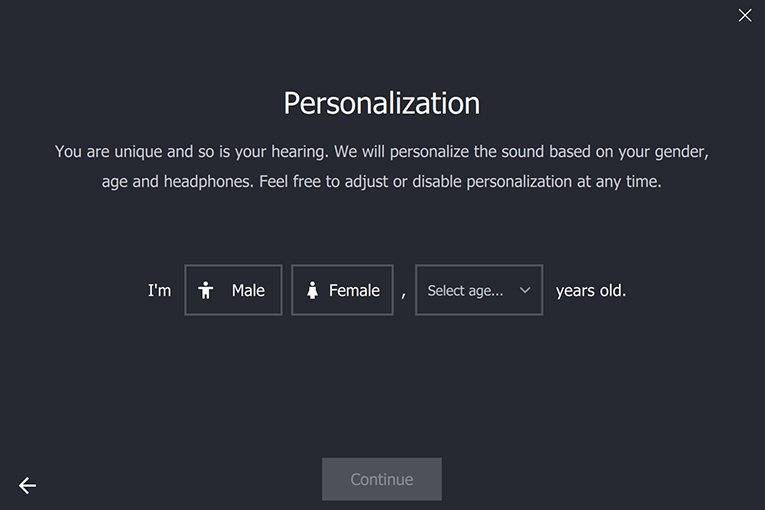 Speaking of that Adjust for Age control: It’s basically a sophisticated treble boost. I didn’t like the sound that much when I selected my age (56) and gender, so I mostly left Adjust for Age turned off. However, it did prove useful for adding a little extra sparkle to dull recordings. And the bass control also helped me fine-tune the response to suit the recording. But, of course, you already have bass and treble controls on your laptop -- you don’t need to buy True-Fi for that.

I don’t believe in equalizing audio systems to compensate for the degradation in hearing typically related to age. As your hearing degrades, your brain compensates, to some degree. As an amateur jazz musician, I’m used to hearing saxophones, flutes, pianos, and drums with my 56-year-old ears. When I start boosting the treble to try to compensate for my age-related hearing loss, the music starts to sound too bright.

In most cases, Sonarworks’ True-Fi substantially improved the sound of the headphones I used it with. I can’t say it will improve the sound of every recording with every model of headphone -- I doubt any EQ app could do that. But, in general, the design and engineering behind True-Fi seems very solid -- and considering that Sonarworks offers a free ten-day trial, you have nothing to lose.