I sure didn’t see this coming. Not just because the N⁰ 5909 headphones are the first to wear the Mark Levinson brand, but they’re also priced about twice as high as the next-most-expensive set of noise-canceling Bluetooth headphones.

Certainly, if you’re going to sell a $999 (all prices USD) set of noise-canceling Bluetooth headphones, it wouldn’t hurt for them to wear the Mark Levinson brand—in fact, the N⁰ 5909s are, by far, the least-expensive product the company sells. And Mark Levinson’s a Harman brand, so whoever designed these headphones could tap into the expertise of the team that produced the Harman curve. In fact, they’re said to have the tightest adherence to the Harman curve—which I assume means the “Harman curve lovers” variant, which is the most common.

But while the Mark Levinson brand targets audiophiles, the N⁰ 5909s target upscale business travelers instead. They offer the key features biz travelers demand—Bluetooth, adjustable noise canceling, and a fold-flat design with a slim travel case. There are a few nods toward audio enthusiasts, though, including a 40mm beryllium-coated driver in each earcup and the LDAC, aptX Adaptive, and AAC Bluetooth codecs.

Most of the controls are accessed through an app, which lets you switch among three active noise-canceling modes (Low, High, and Adaptive); two transparency modes (Voice Boost and Awareness); and three bass EQ modes (Neutral, Enhanced, and Attenuated). The headphones themselves offer only a few control buttons: power on/off, volume, and ANC on/off. There’s a USB-C port for charging, and this doubles as an analog input. You can get them in black, silver, or red.

The headphones include a relatively slim, molded travel case. Two USB-C-to-1/8″ (3.5mm) stereo analog input cables are included—one 13′ (4m) long, the other 4′ (1.25m) long. There’s also a USB-C charging cable, a USB-C-to-USB-A adapter, a 1/8″-to-1/4″ (3.5mm-to-6.3mm) adapter, and a dual-mono-to-stereo adapter for use on older airliners. One especially nice touch is that the case includes a zippered sub-case with elastic straps to hold all these doodads, so they’ll always be ready when you need them. 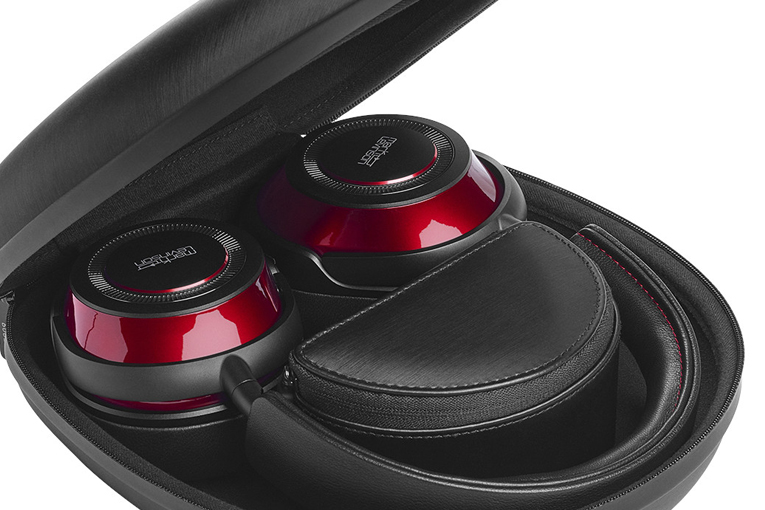 It’s a good sign that even though the N⁰ 5909s are a complex set of headphones, I don’t even know if the company included a manual in the package, because it never occurred to me to read it. The controls are plainly marked, and the operation of all the controls in the app is completely intuitive.

I thought the leather-covered earpads were soft and comfortable, and the headphones had a just-right amount of clamping force; I didn’t have a chance to fly with them, but I’m sure I’d have enjoyed it. 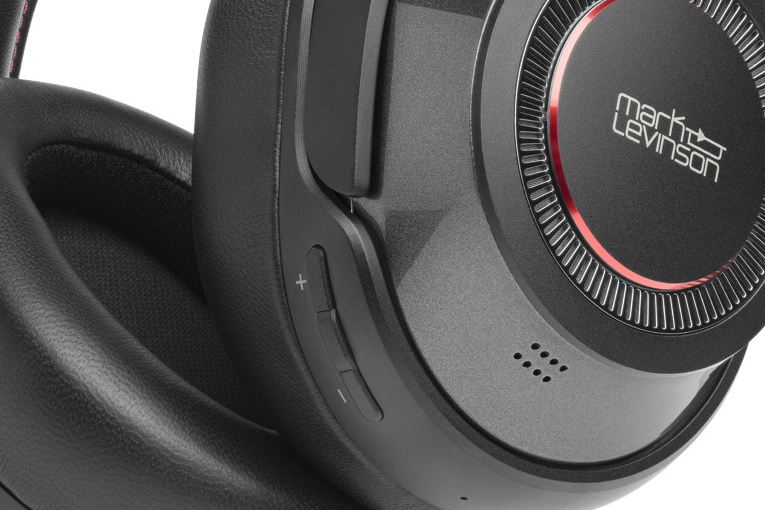 One reason I insisted on having an open comments section here on SoundStage! Solo is that I knew I’d get useful suggestions from readers. One recently recommended the string quartet recordings on BIS Records—for example, the Escher String Quartet’s Barber & Ives: String Quartets (24-bit/96kHz FLAC, BIS Records / Qobuz). On “I. Chorale. Andante con moto” from Charles Ives’s String Quartet No. 1: From the Salvation Army, the N⁰ 5909s sounded mostly spot-on, with a modest sense of ambience that seemed appropriate for the recording, which I assume was made in a small music hall. I’d guess the cello sounded a little fuller than the real thing, but that’s to be expected from Harman-curve headphones, which have a boost below about 100Hz (cello goes down to 63Hz). There was plenty of detail, although the strings did seem a little on the soft side; a more audiophile-oriented set of cans would have likely given the strings more bite. 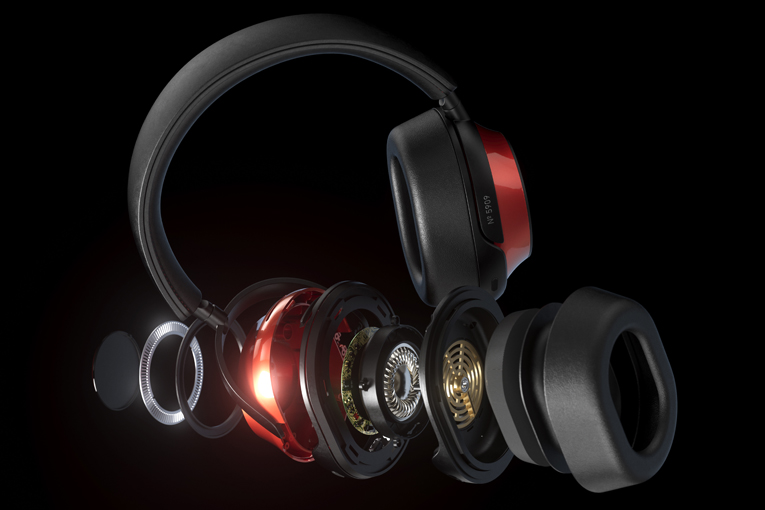 I got a similar sense when listening to the late jazz pianist Harold Mabern’s Mabern Plays Coltrane (24/48 FLAC, Smoke Sessions / Qobuz). On the Coltrane classic “Impressions,” the sound was generally well balanced, with a tight-yet-full sound on the double bass and beautiful imaging of the drums and piano. That said, I did notice a certain brightness that I didn’t hear in the Ives string quartet—a little more mid-treble edginess and honkiness in the tenor sax than I expected, and perhaps 2 to 3dB more treble zip in the ride cymbal than I imagine was intended. The top octave and a half of treble seemed comparatively muted, though.

Not too surprisingly, the better the recording, the more I liked the N⁰ 5909s’ sound. On Patricia Barber’s recent release Clique (24/176.4 FLAC, Impex Records and on Qobuz at last!), the N⁰ 5909s seemed almost perfectly dialed in. I did hear a little bit of mid-treble boost in Barber’s voice on “Trouble Is a Man,” resulting in a bit of excess sibilance, but the bass seemed perfect—full and powerful, with a realistic sense of attack and drive. The piano sounded palpable and weighty, and the cymbals had a wonderfully spacious and “live” sound. 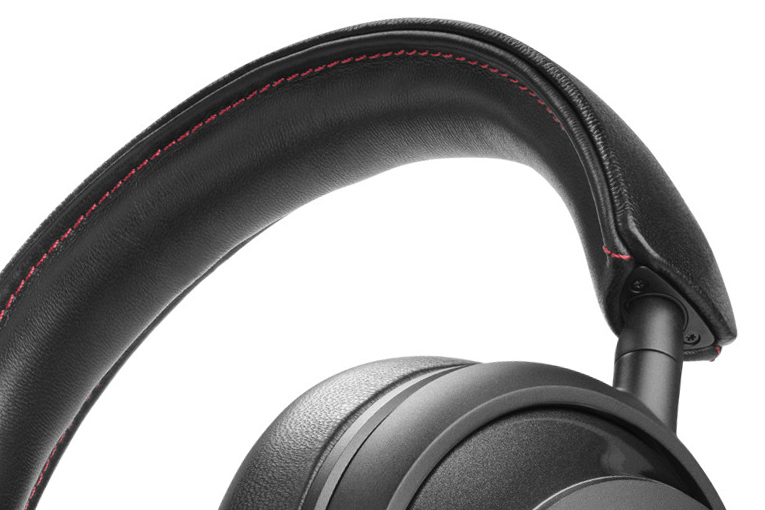 I honestly didn’t expect the N⁰ 5909s to sound great on Mötorhead’s “Love Me Like a Reptile” (Ace of Spades, 16/44.1 FLAC, Sanctuary/Qobuz)—I worried their tonal balance might muddy up the mix—but I felt what I heard was a very accurate representation of the band’s sound. Other than the kick drum, there’s not a ton of bottom end on Mötorhead records because bandleader Lemmy Kilmister played a trebly sounding Rickenbacker bass with a pick in a unique strumming style. Yet “Love Me Like a Reptile” had a huge, satisfying sound that captured all the snap of the snare, the grind of the guitar, and the hoarse croak of Lemmy’s voice just perfectly without sounding in any way fatiguing. In fact, I wanted to crank it up louder than I usually like to listen.

It’s worth noting that switching my Samsung Galaxy S10 phone over to LDAC did improve the sound a bit—it had a little more clarity in the treble, mainly—and I got a similar result when I used the wired connection. I did most of my listening with noise canceling on, although switching noise canceling off didn’t seem to change the sound much.

The Lumineers’ “Where We Are” (Brightside, 16/44.1 FLAC, Dualtone Music Group / Qobuz) clearly revealed the sonic differences among these headphones. To me, the T5s (powered by a THX Onyx DAC-amplifier) exhibited the most dynamic sound, the most vivid sonic images, and the biggest sense of space. It did seem to me that they had a little extra energy—maybe 2 or 3dB—in the 3-to-4kHz range. The N⁰ 5909s had even more treble presence—I’d say a boost of about 4 or 5dB, more up around 5kHz or so—and a few dB extra bass, too. The QC45s sounded fairly well balanced, but they had too much energy around about 200Hz, which muddied up the bass and gave it an exaggerated sense of punch from the kick drum and toms. They also lacked a bit of detail compared with the N⁰ 5909s.

A more typical pop recording, Fleetwood Mac’s “You Make Loving Fun” (Rumours, 24/96 FLAC, Rhino-Warner/Qobuz), gave me a clearer picture of the N⁰ 5909s compared with the others. Overall, I’d consider the N⁰ 5909s’ bass to be perhaps slightly elevated in level but generally realistic and neutral, and they sounded a little more lively and spacious than the QC45s. But I wouldn’t consider them “audiophile-grade noise-canceling headphones,” because I honestly haven’t yet heard anything I’d describe that way.

That said, while the N⁰ 5909s are, in my opinion, the noise-canceling headphones that get the most things right, they’re double the price of what I’d consider their nearest competitor, and any advantage they have over much less costly noise-canceling models from Bose and Sony seems mild.