Marshall Headphones Mode EQ measurements can be found by clicking this link.

How many new consumer-audio brands have emerged in the last seven years or so? I doubt anyone’s counted, but I bet the number has at least doubled, and perhaps tripled. With so many new marques emerging, the entry of the legendary guitar-amp brand Marshall Amplification into consumer audio didn’t get as much attention as it probably would have 15 years ago. That’s sad, because it deserves better. 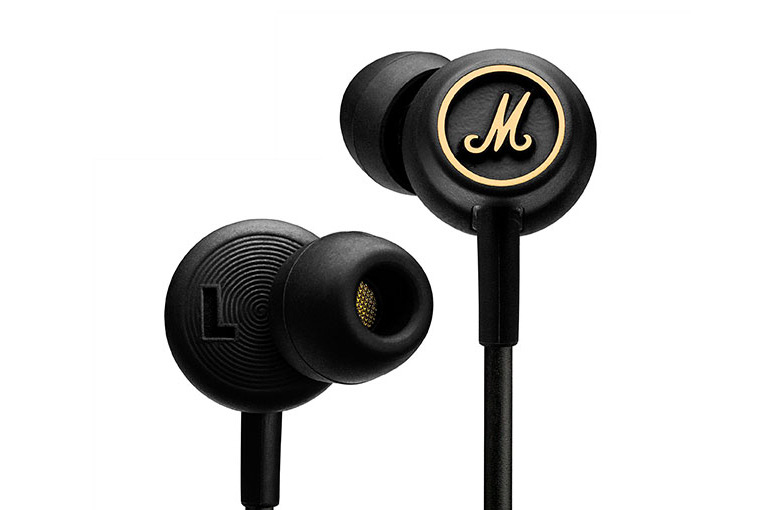 After my terrific experiences with the Stanmore and Woburn, I was naturally interested to hear about the debut of Marshall Headphones’ Mode ($69) and Mode EQ ($99), two new but very similar earphone models. Both use a 9mm dynamic driver (essentially a miniaturized cone speaker driver), and both have an inline microphone/remote control. The Mode EQ adds an equalization switch, gold accents, and a right-angled plug of gold-colored metal that has the look and feel of something you’d find at the end of a guitar cable. The EQ switch has two positions: EQ1 delivers what Marshall calls “warm, bass-heavy sounds,” while EQ2 is “brighter with an emphasis on the mids and highs.” 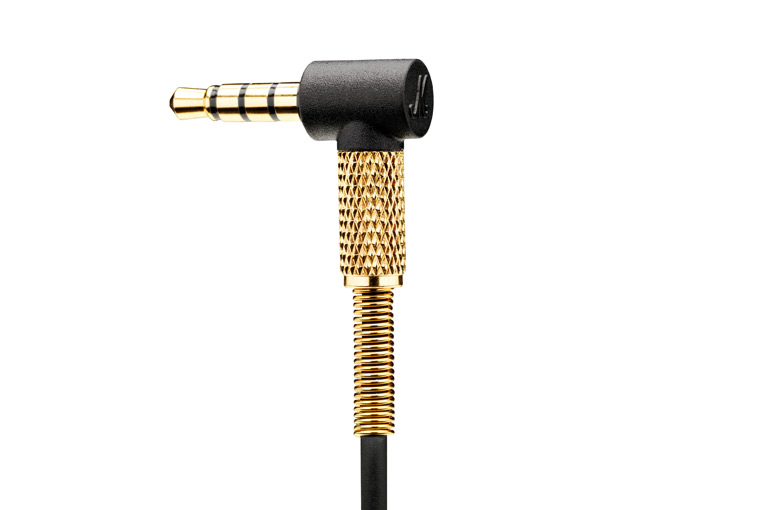 After getting a brief demo of the Mode EQ last September, at the IFA show, in Berlin, I couldn’t resist asking for a review sample.

The Mode EQs come with silicone eartips in four sizes. That’s not impressive compared to most of the earphones I review, but most of those cost two to five times as much. According to an audiologist who recently took casts of my ear canals to fit me with Ultimate Ears custom-molded earphones, my canals are about 10% larger than average, and some earphones (Klipsches, most notably) don’t come with tips big enough to fit me. Fortunately, the Mode EQs’ XL tips fit perfectly.

Strangely, the Mode EQs don’t come with a case, although I found a suitable earphone case on Amazon for $2.07 with free shipping.

I found the fit of the Mode EQs outstanding. Of course, your results may differ, but the earpieces are very tiny, and because the sound tube is at an angle, the whole assembly slipped deeply into my ear. The earphones are light -- I barely knew they were there. The inline remote control has a Play/Pause/Talk button, the EQ switch, and a clip that lets you attach it to a shirt pocket or whatever. 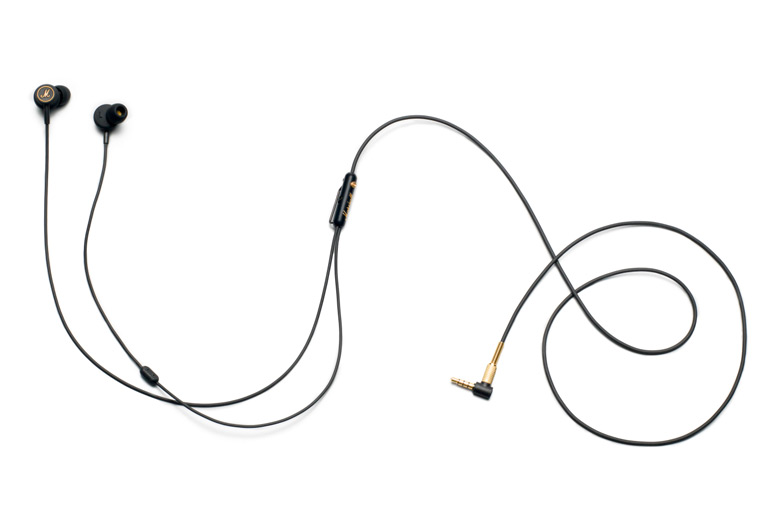 The only ergonomic downside I could find was that the cable noise seemed higher than average. When I walked around my neighborhood, I heard a clumping sound as the cable banged against me. It wasn’t terribly annoying, but these aren’t the ’phones I’d choose for jogging or running on a treadmill. Besides, for those activities I’d probably want a sweatproof model.

Figuring that a $99 pair of earphones would be designed for use with only portable devices, not with fancy-schmantzy headphone amps, I did all of my testing with my iPod Touch and my Samsung Galaxy S III smartphone. I compared the Mode EQs mostly with NAD’s Viso HP20s ($169, high-quality, neutral-sounding dynamic earphones), and Phiaton’s MS 100 BAs ($99, balanced-armature earphones I’m in the process of reviewing).

You might expect that headphones wearing the Marshall brand might be kinda Beats-ish -- i.e., packing way too much bass and rendering everything else in relatively low fidelity. (Although Beats’ latest stuff is much better.) But while the Mode EQs definitely had a sound that I’d call vivid, their tonal balance in EQ2 mode was quite similar to that of the NAD Viso HP20s. There was a little more bass, a little more treble, and a little less midrange, but still, the sound was well balanced. In fact, the first time I listened to the Mode EQs I breathed a sigh of relief -- they were clearly pretty good earphones. 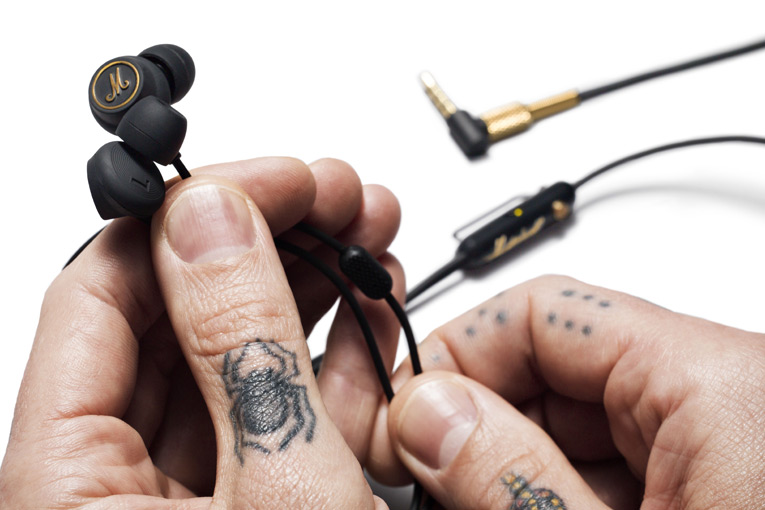 Jazz bassist Ray Brown’s Soular Energy (256kbps MP3, Concord) provides a perfect example of what the Mode EQs could do. In EQ1 mode -- the one that’s more bassy -- Brown’s double bass sounded a little boomy, but not crazy boomy. The nice thing was that the somewhat big bass didn’t in any way take away from the mids and highs, which surprised me. When I switched to EQ2 mode, though, the Mode EQs started to sound really good. They had the classic sound of good dynamic earphones, with plenty of dynamics and bass and a smooth overall response. Sure, the Phiatons’ balanced-armature drivers have a more delicate treble, but in EQ2 mode the Mode EQs swung harder. Very, very listenable.

That’s not to say that the Mode EQs necessarily sounded better in EQ2. In fact, that’s the thing I liked most about the Marshalls: The differences between their two EQ modes were subtle enough that I found I liked EQ1 better for some tunes, EQ2 for others. 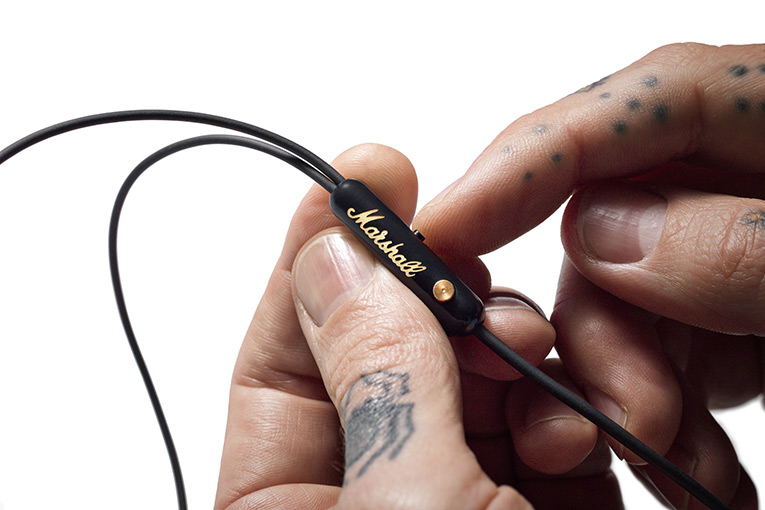 Headphones that sound right for relatively lightweight pop/rock like R.E.M. can sound wimpy and thin with hip-hop, but with the Mode EQs you’ve got that EQ switch to amp up the bass if you want. To my surprise, though, I thought EQ2 sounded better with “LoveHate Thing,” from Wale’s The Gifted (256kbps MP3, Atlantic). Even in their bass-restricted EQ mode, the Mode EQs sounded really good with this cut -- very vivid and dynamic, with powerful, growling bass, and crystal-clear reproduction of Wale’s rap. In EQ1, the bass got too loud for my taste but didn’t spoil the sound; Wale’s rap sounded just as clear and natural as with EQ2.

“Has all the good qualities people associate with Beats, with none of the bad,” I jotted down while listening to “Rosanna,” from Toto’s IV (256kbps MP3, SBME). By that I meant that in EQ1 mode, the Mode EQs had a big, vivid sound with this cut. It definitely sounded “smiley” -- with the bass and treble both a little pumped up -- but it also sounded great. In EQ2, “Rosanna” was a bit thin for my taste; I could hear more of a midrange peak, and the sound seemed a little strained. 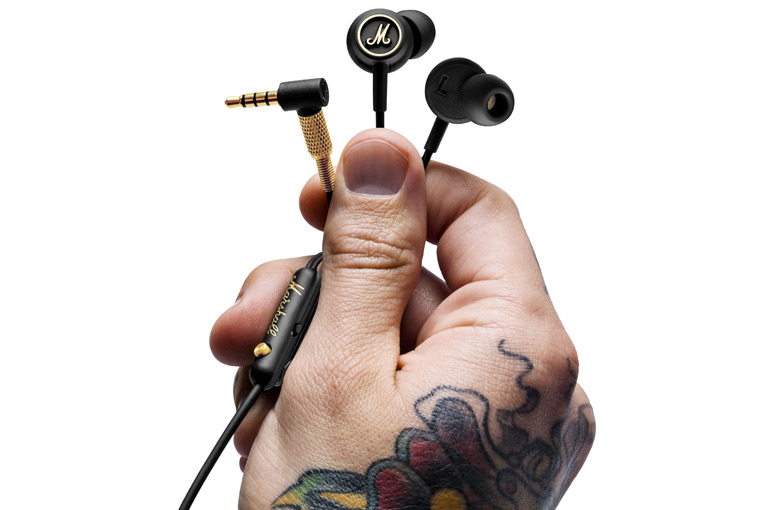 Ultimately, this is the great thing about the Mode EQs: With a flick of a switch, you can change the sound without messing it up. I’ve heard other headphones that offered multiple sound modes, but most of them had only one mode that was actually listenable; the rest were throwaways. I bet any buyer of the Mode EQs will end up using both modes. Both sound good, and just a little different from the other; one is likely to suit whatever music you throw at it.

Marshall Headphones’ Mode EQs are a good buy in a pair of $99 earphones. They sound basically neutral overall, and their EQ switch lets you easily tune them to the music you’re listening to without messing up the sound in any way. They also have a great fit and a friendly design.