There’s something quite refreshing, appealing even, about no-nonsense wired earphones. It often seems like the earbud category has been completely inundated by true wireless. This is largely because it absolutely has. But a handful of companies are still coming out with new models, either out of love for the design or desire for a larger piece of a shrinking pie.

Take, for example, the Linsoul 7Hz Timeless earphones. At $219.99 (all prices USD), these are midrange earphones with a number of features typically found in higher-end earphones. There are 14.2mm planar drivers and detachable cables, and the earbuds are machined from “aviation grade” aluminum. 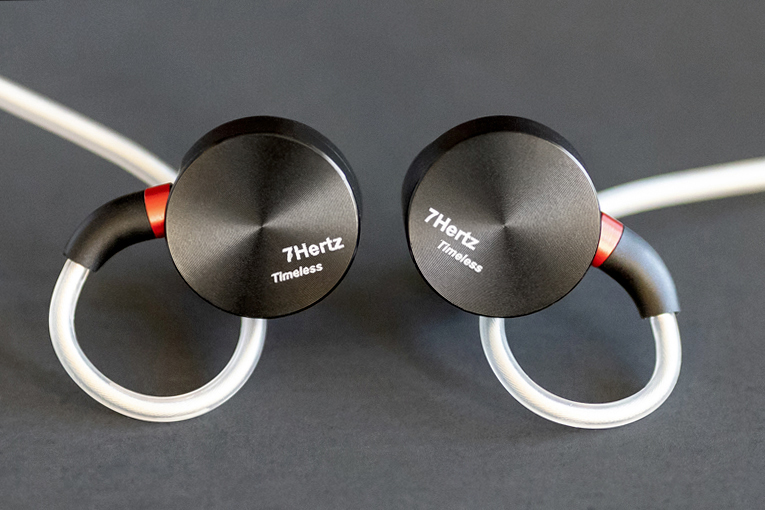 Overall, they feel higher-end than their price suggests. Sound-wise—spoiler alert—they’re quite good. They’ll work for all styles of music, but fans of some genres will enjoy them more than others. Here’s why.

The luxury feel of the Linsouls is well fostered by the box. Lifting off the textured top reveals silver text on a black background. First in Chinese, then in English: “This is an auditory revolution. Headphones are no longer cold equipment. Timeless feels the temperature of the music with you.”

OK, calm down, Linsoul. Though I guess, because they’re aluminum, they do technically feel the temperature with you. Head heatsinks. The 7Hz Timelesses also come with an aluminum carrying case that’s far more elaborate than most earphones I’ve reviewed, regardless of price. 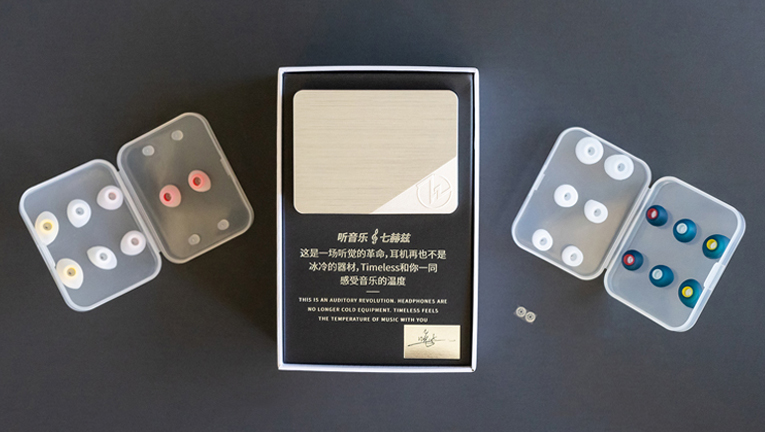 Separate from the box within the box are positively a plethora of eartips. Spread across two additional boxes, plastic this time, are over 20 tips of various sizes. I’m all for this level of customizability, but there’s less here than first appears. They’re all silicone, for one, no foam options. Most are basically the same size, nearly identical except for their color. I would have preferred lower quantity but greater variety, but this is a minor complaint.

First you need to install the app. Just kidding; there’s no app. Like I said, refreshing. The cable is detachable, and the first few in/cm from the earbuds is covered with a rigid sleeve. This gives the cable some structure to let you know that it should go around your ear and down behind. This certainly helps prevent the earbuds from getting tugged out of your ears. 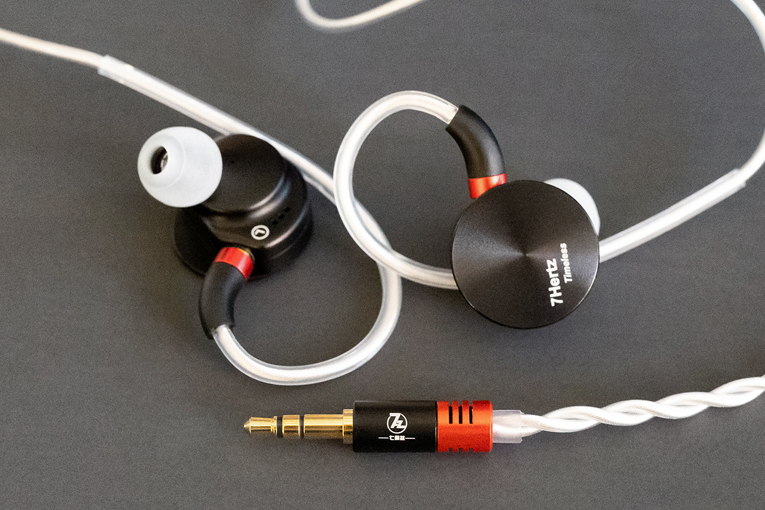 Most notable, perhaps, is how light they are. I suppose when you read “aviation-grade aluminum” you do think lightweight, but more like how a two-seat Cessna is lighter than, say, an M1 Abrams main battle tank. When it comes to earbuds, metal is usually heavier than plastic. Linsoul claims each bud weighs 5 grams. This is actually less than the Bose QuietComfort Earbuds II I reviewed last month. With the cable loop taking some of the weight as well, the 7Hz Timelesses were quite comfortable.

I do wish the cable was a bit longer though. It’s about a meter, which is just short enough for someone my height to constantly be pulling on it when it’s connected to a phone in my pocket. The connections to the earbuds are MMCX, so you can replace the cable if you’re having the same annoyance. A number of companies make or sell such cables, including, not surprisingly, Linsoul.

To be honest, I was expecting something called “7Hz” to have a lot more bass. Instead, the balance is toward the treble. Not severely, but it’s as if someone turned the Treble knob on the EQ to +1 and the Bass to -1. Fortunately, the treble is fairly smooth, not harsh or fatiguing. My personal tastes lean toward the opposite of that fictional EQ setting, but even so, I’d say these are a bit more treble-biased than what I’d call strictly “neutral.” This isn’t enough to really call it a negative, however. There are certainly many genres that would benefit from such detailed and expansive treble. 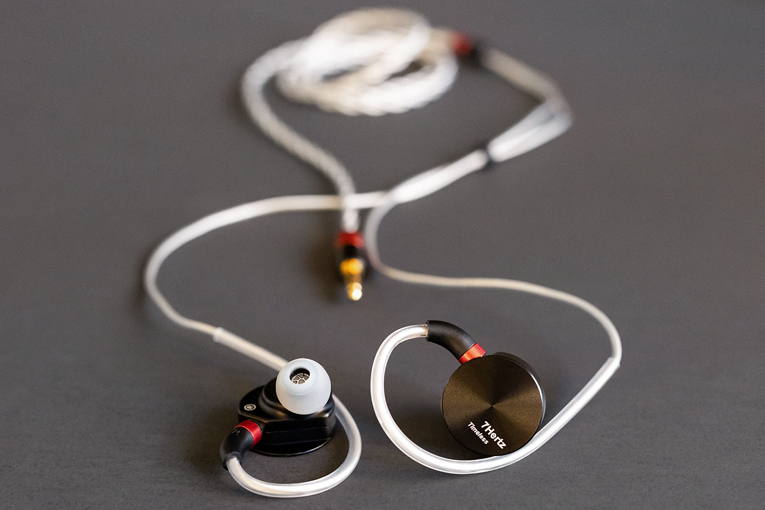 Take, for example, the London Symphony Orchestra’s performance of the first movement of Vivaldi’s Violin Concerto in F Minor, “Winter” (Vivaldi: The Four Seasons, 16-bit/44.1kHz FLAC, Deutsche Grammophon / Tidal). The violins had a smooth clarity, filled out by the broad, full orchestra sound when the rest of the musicians came in. That orchestra didn’t quite have the deep punch it has on other earphones, but it didn’t feel hollow.

Another track that sounded fantastic was “Bibi” by Jayme Stone and Mansa Sissoko on their album Africa to Appalachia (16/44.1 FLAC, Jayme Stone / Tidal). This track is a gorgeous blend of Stone’s banjo and Sissoko’s kora. From the delicate string plucks to Sissoko’s tenor voice, this track sounded open and melodious. Each instrument had its own distinct place on the soundstage, even when the myriad other traditional Appalachian and African instruments joined in throughout the song. An absolute delight.

Again, this isn’t to say there isn’t bass. I found myself listening again to Carly Rae Jepson’s “Beach House” (The Loneliest Time, MQA, Interscope/Tidal). This is a good example for the Linsouls, as this track has a hard-hitting bassline that was reproduced well here, in terms of not being muddy. However, the higher-end synth and percussion sounds are far more present and forward. Some audiophile types loathe bass, and if that’s you, these still probably have more than you’d like. If, conversely, you like bass, these might leave you a bit wanting in that department. 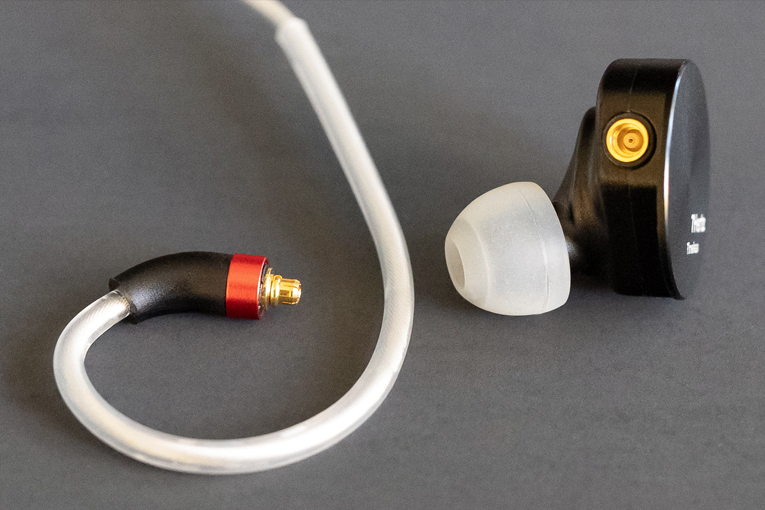 Or to put it all more succinctly, a more neutral set of earphones would have a little less treble and a little more bass, but not by too much in either case.

With a similar price, and similarly wired, my first comparison was with my aging go-to earbuds, the B&W C5 Series 2s. I’ve listened to these more than any other earphones, and I’ll be the first to admit they are very bass heavy. I like this in casual listening, which is why I make pains to mention that fact at every chance because I know most people don’t like as much bass. That’s totally fine, and I’ve heard enough earphones at this point to be able to pick out what’s too much or too little at either end of the spectrum.

So, yeah, shocker, the C5s had way more bass than the 7Hz Timelesses. When I listened to David Bowie’s “The Man Who Sold the World” (The Man Who Sold the World, MQA, Mercury/Tidal), it was like the Linsouls overcorrected the EQ from the C5s. Bowie’s voice was far more forward, as was the various percussion. The rising bassline heading into the chorus, however, wasn’t buried, per se, but it was more subdued than with the C5s, where it was much more prominent. I’d say the Linsouls are closer to neutral than the B&Ws, but they were both a bit too much on either side. Sort of a choice between +2 or -3 when the ideal is 0.

If you read my review of the Edifier NeoBuds S earphones, you might be thinking: why are you comparing the Linsouls to yet another bass-heavy set of earbuds? I’m not. Well, I am, but not for that reason. One of the things that impressed me most about the Edifiers was their surprisingly huge soundstage for earbuds. For example, with “Bibi” mentioned above, there’s wide spacing between the various instruments, some seeming to come from out past my ears, practically over my shoulders. The Linsouls weren’t nearly as wide, though they were better than many earbuds that really seal you inside your head. Also, listening through this track again, I noticed how precise the attacks on the string and percussion instruments were with the Linsouls, far more so than with the Edifiers.

I certainly understand the convenience of true wireless earphones. I review a lot, and I usually have a pair (or two) with me on any adventure. My go-to earphones, however, the ones I listen to the most, are wired. Even when I started buying mobile phones without headphone jacks (grumble, grumble, grumble), I kept using wired earphones, just with a dongle. I like the simplicity, not needing to charge yet another device, and, most importantly, the sound quality. This isn’t to say there aren’t great-sounding true wireless earphones—just that all product design is a compromise, and lining up price, features, and sound is hard enough without having to fit in batteries, antennae, processing, and more. 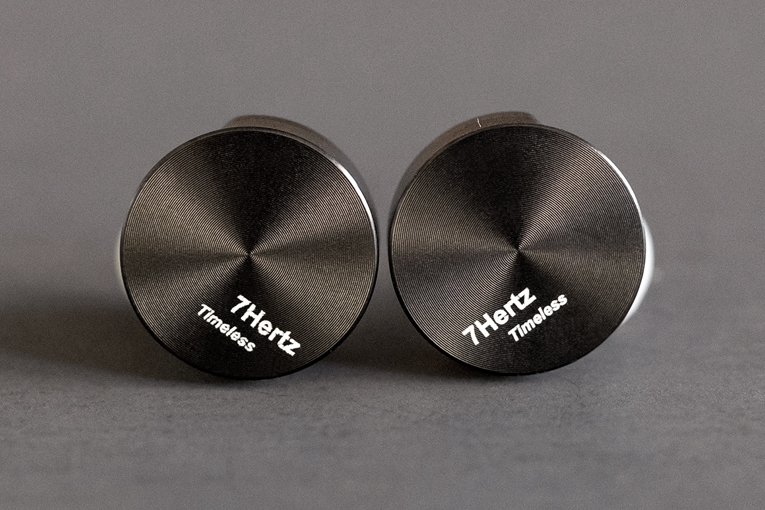 There are a number of companies, many of them based in China, still focusing on high-quality wired earphones. Linsoul has certainly done a solid job creating a product that feels more expensive than its price suggests, and who doesn’t like a touch of luxury for their money?

Sound-wise, there’s a lot to like about the 7Hz Timelesses: lightweight and comfortable, a tonal balance tilted slightly toward a detailed treble, and somewhat subdued bass that’s not boomy or muddled. I think most people whose musical tastes lean toward classical, or any genre that benefits from a precise high-end reproduction, would really like the 7Hz Timeless earphones. If you like your sound with a bit more bottom end, perhaps not.

. . . Geoffrey Morrison
This email address is being protected from spambots. You need JavaScript enabled to view it.

Email: This email address is being protected from spambots. You need JavaScript enabled to view it.
Website: www.linsoul.com