Unlike many Western audio companies, Kinki Studio makes no effort to obscure the origins of their products, which are not only manufactured but designed in China—emblazoned on the rear panel of everything they make is the proud statement “We Come From China.” Their Vision THR-1 headphone amplifier costs $1198 including shipping (all prices USD), and, outside China and Hong Kong, is warranted for three years when purchased through an authorized distributor, who will handle any warranty service. For those without a local distributor, Kinki’s website is also an online store, based in Singapore. 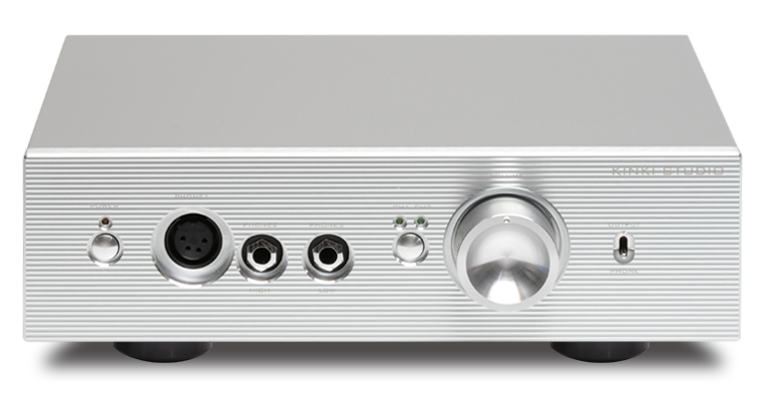 The compact Vision THR-1 measures 10.6ʺW x 3.9ʺH x 8.3ʺD and weighs 13.2 pounds. Its front panel is a solid and attractive slab of aluminum corrugated like the fuselage of a 1930s passenger plane. On it, from left to right, are: a Power button surmounted by an LED that glows orange when the unit is on; a four-pin XLR headphone jack labeled Phone1; a pair of 1/4″ (6.3mm) jacks labeled Phone2 and Phone3, respectively also labeled for headphones of High and Low impedance; a button for selecting between Channel 1 (single ended) and Channel 2 (balanced) inputs; above this two small LEDs, labeled Ch1 and Ch2, to indicate which input is active; a large, smooth volume knob with a concave face; and an Output/Phone switch for toggling between line and headphone output.

The left side of the rear panel contains all input and output connections: a pair of female balanced (XLR) connectors labeled Right In and Left In above and Ch2 below, and between these a pair of single-ended (RCA) jacks labeled Right In and Left In above and Ch1 below; then a pair of stacked output XLRs labeled Right and Left. At far right is a three-pronged IEC power inlet with fuse bay, and below that the model and serial numbers. The THR-1 sits on four largish, rubber-bottomed feet that, when I tapped one, felt and sounded substantial. The frequency response is rated as 20Hz-300kHz, ±1dB, with a S/N ratio of >98dB. The input sensitivity is 2.25-3.6V RMS, the input impedance is 50k ohms, and the preamp output is 2.25-3.6V RMS. Each headphone output can deliver 2.2W at 300 ohms or 1.3W at 600 ohms. 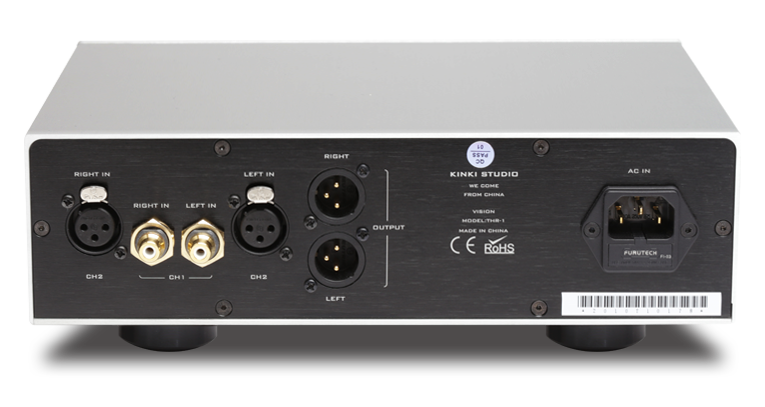 The Vision THR-1 comes well packed in a double box with foam inserts, to secure it during its journey. My review sample was finished in black with white lettering (it’s also available in silver with black lettering). An “el cheapo power cord” (Kinki’s wording) is included, but the manual implores you to “Please use your own audiophile power cord for best sound.” I just want a cord that safely supplies the electricity a component needs to operate, so I used the included cord. But if it’s genuinely insufficient (it wasn’t), it shouldn’t be included. The bit about the power cord seems more marketing than genuine recommendation. I’m not a power-cord guy.

Overall, I found the Vision THR-1 easy to use, its labels clearly and logically indicating the operation of its controls. 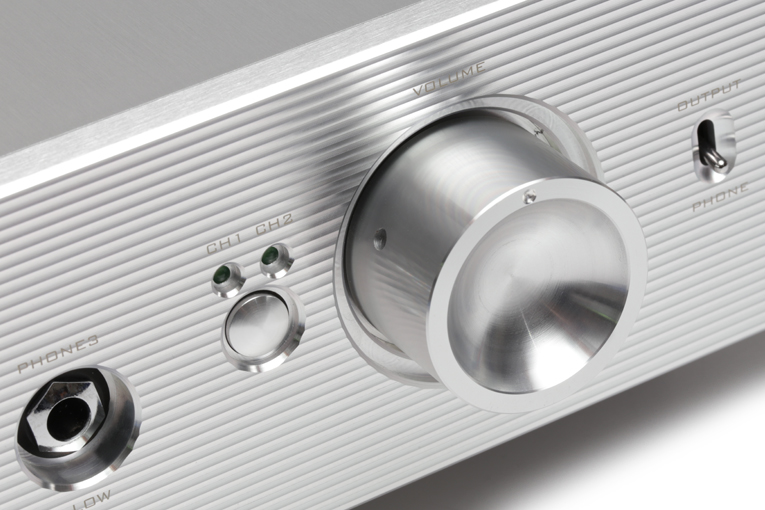 Though the THR-1 got moderately warm in use, it won’t heat your listening room in winter. I used all three of its headphone outputs, but not the line-level balanced output. This review is devoted to the THR-1’s sound when driving headphones, not (powered) speakers.

The Vision THR-1’s sound depended on how it was connected, and I’m not talking about fancy cables (see “el cheapo power cord,” above)—this amp’s balanced and single-ended outputs sounded markedly different. The biggest difference was between a balanced source connection to balanced headphones and a single-ended source connection to single-ended low-impedance headphones. Plugging low-impedance ’phones, such as HiFiMan’s HE-500s, into the high-impedance output resulted in a slight boost in volume and a reduction in bass. But when I did the reverse, using the Beyerdynamic Amiron Home ’phones (rated impedance 250 ohms, but SoundStage! Solo’s Brent Butterworth measured them at more like 300 ohms), the sound didn’t change. The Beyerdynamics are also much more sensitive than the HiFiMans, and that may make a difference. 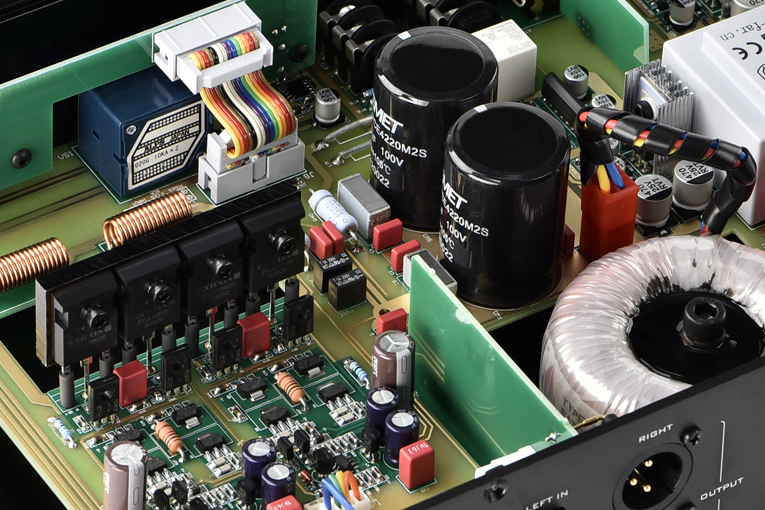 Regardless of connection or headphones used, a few things remained constant about the Vision THR-1’s sound. The bass went lower than the lowest limbo champ, and with more power than The Mountain from Game of Thrones. More than once, I was startled by the bass dynamics. About eight minutes into “Mojave Plan,” from the 2020 remastering of Tangerine Dream’s White Eagle: Deluxe Version (16-bit/44.1kHz FLAC, Virgin/Tidal), there’s a double thwump that sounded as if someone had just dropped two giant dollops of molten lead right next to me. It also gripped bass very firmly, with little or no overhang. Bassheads, this amp’s for you.

The Vision THR-1 was also a champ at texture. In the intro of “Trip Like I Do,” from The Crystal Method’s Vegas (16/44.1 FLAC, Tiny e/Tidal), a distorted arpeggio accompanies a pulsing textured sound whose pitch is controlled by a low-frequency oscillator. Through the Kinki and the Denafrips Ares II DAC in non-oversampling mode, it sounded like the love child of a prickly pear and a teddy-bear cactus—so much varied, spiky texture. And did I mention that this amp did bass quite well? Probably won’t be the last time. 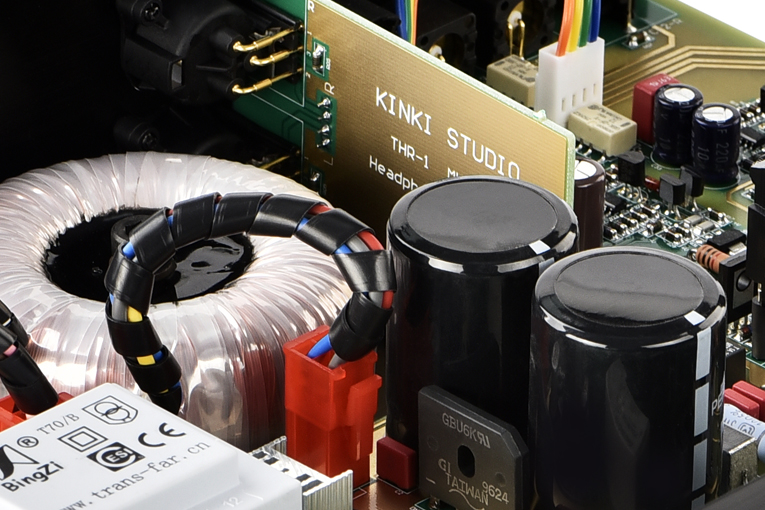 Though not necessarily to the same degree, bass and texture for days were still available with the single-ended-only Schiit Modi Multibit DAC into the HiFiMan HE-1000 V2 headphones through the Kinki’s single-ended or balanced outputs. Casually listening to “Killing in the Name,” from Rage Against the Machine (16/44.1 FLAC, Epic/Tidal), through the Schiit Modi Multibit and the HiFiMan HE-1000 V2s plugged into the Kinki’s balanced output, I thought, Man, that guitar sounds just like it’s jacked into a Marshall half stack! I looked it up—sure enough, it was. And the guitar itself was a Fender Telecaster, which I never would have guessed.

The only real shortcoming of the THR-1 was that it sounded much better through its balanced inputs and outputs. Through its single-ended input and output the sound was bass heavy and a bit murky; the imaging, while still very good, was diminished; and the sound was a bit recessed around 1kHz, reminding me a lot of my Denon PRA-1500 preamplifier. Switching the HE-1000 V2s’ cables from single-ended to balanced improved things: The bass balance got more accurate, and the imaging improved somewhat. 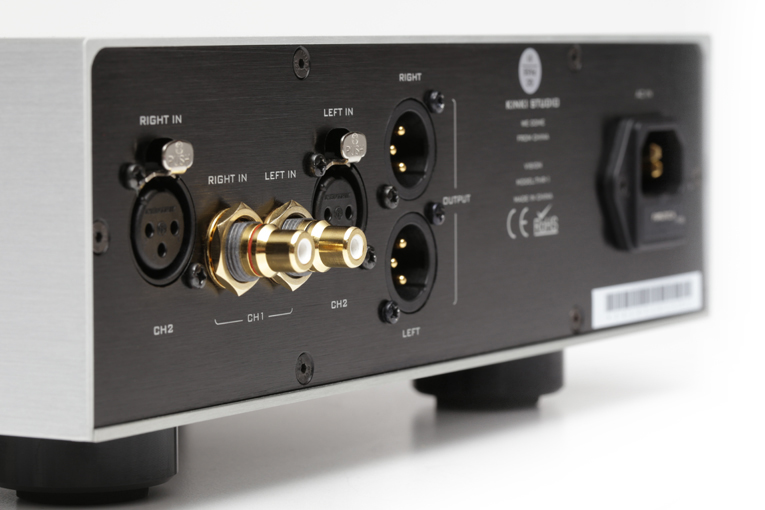 But HiFiMan’s HE-500 headphones, which sound dark to begin with and for which I lack balanced connectors, were a no-go with the Vision THR-1. The sound was just too rich, like peanut-butter-and-chocolate cheesecake—delicious, but I can eat only a wafer-thin sliver. The biggest change happened when I switched from single-ended to balanced input. The soundstage opened up considerably, the bass got much more accurate with no loss of power or depth, and the glassiness entirely disappeared. With this amp, system matching was more important than the norm—it sounded best with balanced sources.

Don’t get me wrong—the Vision THR-1 sounded very good through its single-ended inputs, but as if it had been voiced for a specific type of listener. Luckily for me, that listener’s taste in music overlaps considerably with my own. Still, unless otherwise noted, assume that I did all of my serious listening through the Kinki’s balanced inputs, fed by the Denafrips Ares II or Cambridge Audio DacMagic 200M DAC via USB, and using the HiFiMan HE-1000 V2 (mostly balanced, some single-ended) and Beyerdynamic Amiron (single-ended, high impedance) headphones. As noted, my HiFiMan HE-500s weren’t a good match for the Kinki Studio—though with the Denafrips DAC they made Adele’s 21 much more listenable by taking off some of that album’s edge. 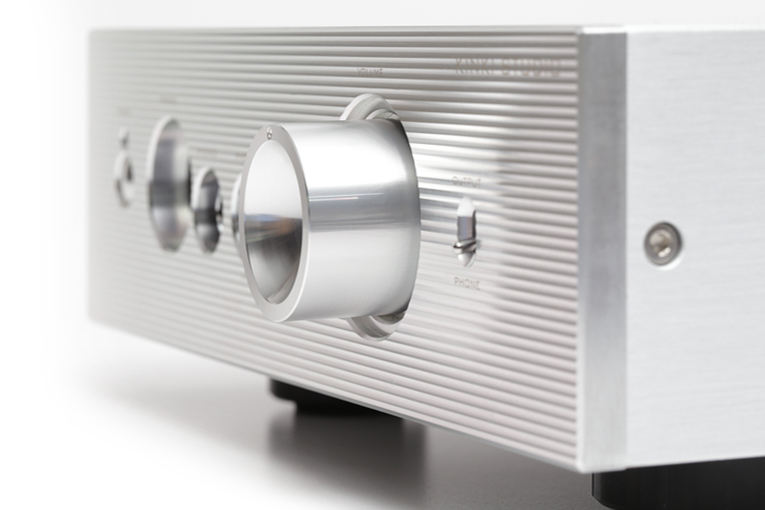 “The Living End,” from the Jesus and Mary Chain’s Psychocandy (24/44.1 MQA, Warner Music UK/Tidal), showcased another strength of the Vision THR-1: its creamy but detailed top end. Throughout what is a pretty traditional pop/rock song are woven many different textures of predominantly high-frequency distortion like ribbons of different fabric, highlighting some of the chord changes. The performance is a little angry. Through the Kinki Studio amp I had no problem telling aural satin from silk, velvet from velour, cotton from rayon.

The track that perhaps best showcased the Kinki’s strengths was “Buena,” from Morphine’s Cure for Pain (24/44.1 MQA, Rykodisc/Tidal), as did that entire album. “Buena” features Mark Sandman’s sinewy, growling, two-string slide bass, supported by Jerome Deupree’s sharp, natural-sounding drumming, and a bit of picked guitar from Sandman. The pick noise is clear—it sounds as if he’s scraping as much as picking the muted strings, and the way his bass slithers reinforces the devilish duality of the song’s subject. Dana Colley’s saxophone, which enters in the first chorus, is the aural equivalent of a velvet-smooth cheesecake fresh from your favorite local purveyor, not prepackaged at some factory. If you like bass, dynamics, and texture, the Kinki is the good stuff. 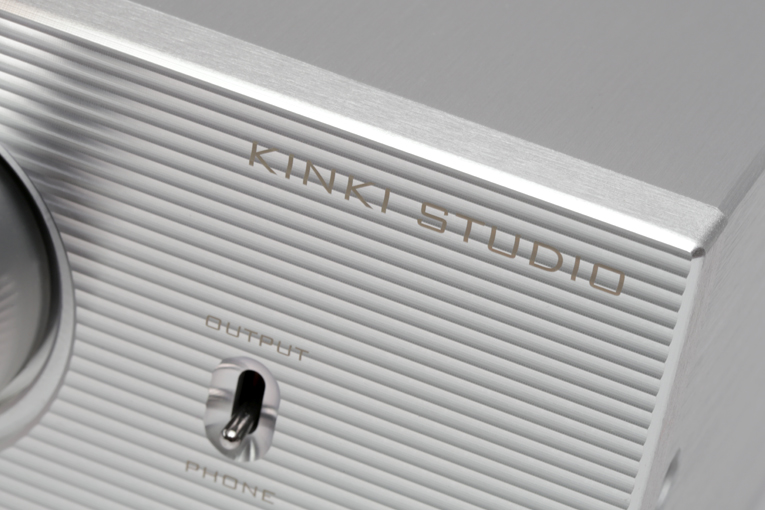 My regular headphone amplifier, a Schiit Audio Asgard 3 ($199), at one-sixth the Vision THR-1’s price and only 40% its weight, is in a different class not only of sound quality but of circuit design—it operates in a type of class-A Schiit calls Continuity, and runs much hotter than the Kinki. The Asgard 3 is also specified to put out a bit more power. The Kinki produced much more bass weight and slam than did the Schiit. Not all watts are the same. With Morphine’s “Buena,” the Asgard 3 was much less assertive than the THR-1, but its highs were more open and harmonics were more pronounced. Through the Schiit, the sax was a bit more in the background.

It was a different story with my Tandberg TIA 3012, a 40-year-old integrated amp restored by Soundsmith. This wasn’t a serious comparison—you can’t just go out and buy a TIA 3012—but the Tandberg was all I had on hand, other than a Schiit Asgard 2 (which the Asgard 3 betters in nearly every aspect of sound). The TIA 3012 also sounds really good, and much better than the Schiits. The Vision THR-1 still had a definite edge in the areas of low bass and dynamics, but otherwise, which one you might prefer will depend on personal taste. The Tandberg’s sound was more detailed, more defined, and was faster, with, bass aside, better dynamics. The Kinki had more oomph, and about the same amount of texture, if with a different emphasis: the THR-1 having a richer texture, the Tandberg more defined, with cleaner edges on transients.

Kinki Studio is proud to come from China, and they don’t need to apologize for the sound or build quality of their Vision THR-1—clearly, they ain’t foolin’ around. This is not the headphone amp for everyone, but if it pushes your audio buttons, as it did quite a few of mine, it may be the headphone amp for you. I very much enjoyed my time with it, and am a little sad to see it go. It’s by no means a perfect amp, but fed from a balanced source into balanced headphones via its XLR output, it could provide bass that was amazingly tight and full, with startling dynamics. Nor were those dynamics limited to the bass—in fact, other than a bit of reticence around 1kHz, the THR-1’s dynamics seemed boundless. I found its rich overall balance addictive. Its imaging was well outside my head, producing the illusion of a cloud of sound around my noggin, and it had a way with texture that practically massaged my ears.

. . . Mark Phillips
This email address is being protected from spambots. You need JavaScript enabled to view it.

E-mail: This email address is being protected from spambots. You need JavaScript enabled to view it.
Website: www.kinki-studio.com